When we bought our first home, we loved the detached deck in the backyard. It was large, well-lit, easy to maintain, and looked like it was going to be great for entertaining guests.

However, as the years went by, we didn’t use it as much as we thought.

It turned out that being detached from the house was more of an inconvenience.

We had to walk through the grass to get to the deck, so when I got behind on the mowing, or after a rain shower, the deck wasn’t as appealing.

Then Eileen came up with the idea to build a stone walkway to the deck, so the deck could be easily accessed no matter the weather or condition of the grass.

So after some online research, we embarked on the stone walkway project. 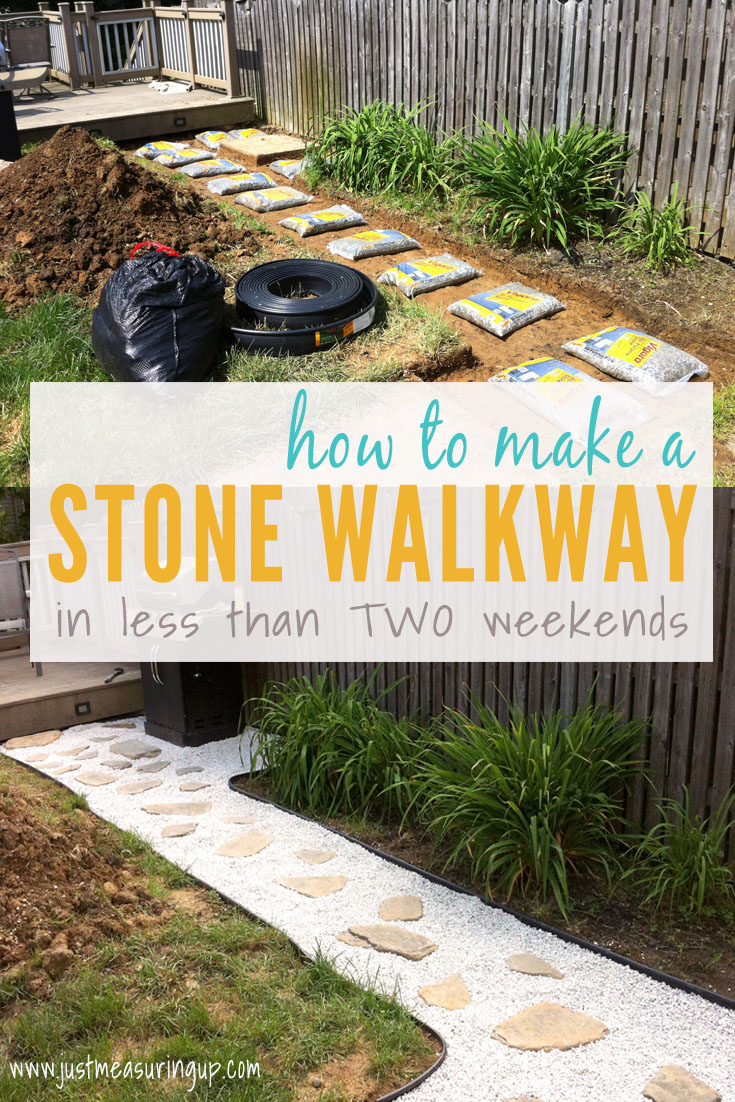 How to Build a Stone Walkway

First, here’s a picture of the yard before we got too far in. Eileen is hard at work with the shovel, and Zeus is supervising.

To build a stone walkway, our first step was to dig a 6-inch deep trench from the backdoor patio to the deck. I outlined the proposed stone walkway by pinning yarn in the ground.

Then, staying within the boundaries of the yarn, we dug out the trench.

This step went by pretty quickly. We used a standard round pointed digging shovel.

After the trench was dug, we switched to a square pointed shovel and worked along the edge to make a nice flush wall.

Then we used a 8 x 8 steel tamper to compact the dirt, making a solid and level surface for the rocks to follow.

Here’s a picture of the dug-out trench. We were on our way to building a stone path 🙂

Next in building the stone pathway was laying down the large crushed stone.

This layer of stone was to provide a sturdy foundation to support whatever weight got carried across the pathway.

Home Depot sold the stone in 0.5 cubic feet bags. In total, we used about 35 of these bags.

To distribute the stone evenly, we found it best to place the sealed bags at intervals, and open them in the pathway.

Then the stones were spread out using a shovel and metal bow rake.

After the foundation was laid, we had to install lawn edging against the wall of the trench.

The edging was needed to keep the stones inside the pathway, so they wouldn’t wander into the grass.

To install, we ran it along the inside edge of the trench, nailing in metal stakes at regular intervals and at corners.

Afterward, landscaping fabric was laid down to help keep weeds out of the pathway.

Here’s what the pathway looked like with the edging and fabric. We were definitely getting the hang of building a stone walkway.

Next up in our stone walkway project was the second layer of stones.

Unlike the foundational stone layer, this was the topmost layer that was exposed to foot traffic.

The rocks needed to be small so they could compact nicely. We went with about 30 bags of white marble chips.

Prior to starting work on the stone path, our yard had some stepping stones embedded into the ground for access to the deck.

They required constant maintenance as grass would grow over them very quickly. In fact, we did not even know about them for the first year of living there because the grass grew over them.

We wanted to incorporate them, so we scattered them across our path and partially buried them with the marble chips to secure them in place.

This turned out to be a very functional aspect in building the stone path.

It allowed us to get to the deck without having to walk on the marble chips.

Although the marble chips were nice-looking, they tended to get stuck in your sandals/slippers, and were not comfortable to walk on if you were barefoot – so it was great to have the stepping stones.

Here’s a picture with the marble chips and embedded stepping stones:

Adding A Cove To The DIY Stone Walkway

The stone pathway to the deck was now completed.

However, we decided to build a small addition to it – a pathway to the right leading to a little cove.

The idea was actually tossed around at the beginning, but we wanted to see how the path turned out first before digging up that part of the yard.

To the right of the path, there was a small table with 2 seats. However, it was often overgrown with grass and weeds and difficult to maintain.

We wanted to make the little cove a functional aspect of the yard again.

So, repeating the steps we did for the stone path to the deck, we dug out a trench for the addition for layered the necessary stones.

Here’s a picture of the trench dug out:

Finally, here is the completed addition once the stones were added.  All that was missing was the table and two chairs:

AND, ALL THE LEFTOVER DIRT…

You can also see me stressing out about the big patch of dirt in the middle of the yard, left over from digging the stone pathway.

I was never good at getting grass to grow, so I wasn’t looking forward to that project.

Prior to the large dirt patch was a giant dirt mound from all the digging. While trying to figure out where to relocate all this dirt, our neighbor asked if he could have it – apparently, his dogs left a lot of holes in his yard.

So we shoveled all the dirt right over the fence into his yard (don’t try that without your neighbor’s approval).

Anyway, our hard work on the stone walkway paid off! We had a wonderful looking stone path providing easy access to the deck.

The walkway was very low maintenance, and even our dog used it instead of running through the grass – he hates to get his feet wet – oh Zeus.

Here’s the before and after pictures of the stone walkway:

In just two weekends, Eileen and I made this stone path that connected our patio to our detached deck. If you are looking to build a stone walkway, it’s an easy project with a large payout! And, the total cost was around $250.

Eileen and I, as well as Zeus, used the pathway more than we ever thought, so it was worth every penny. ​