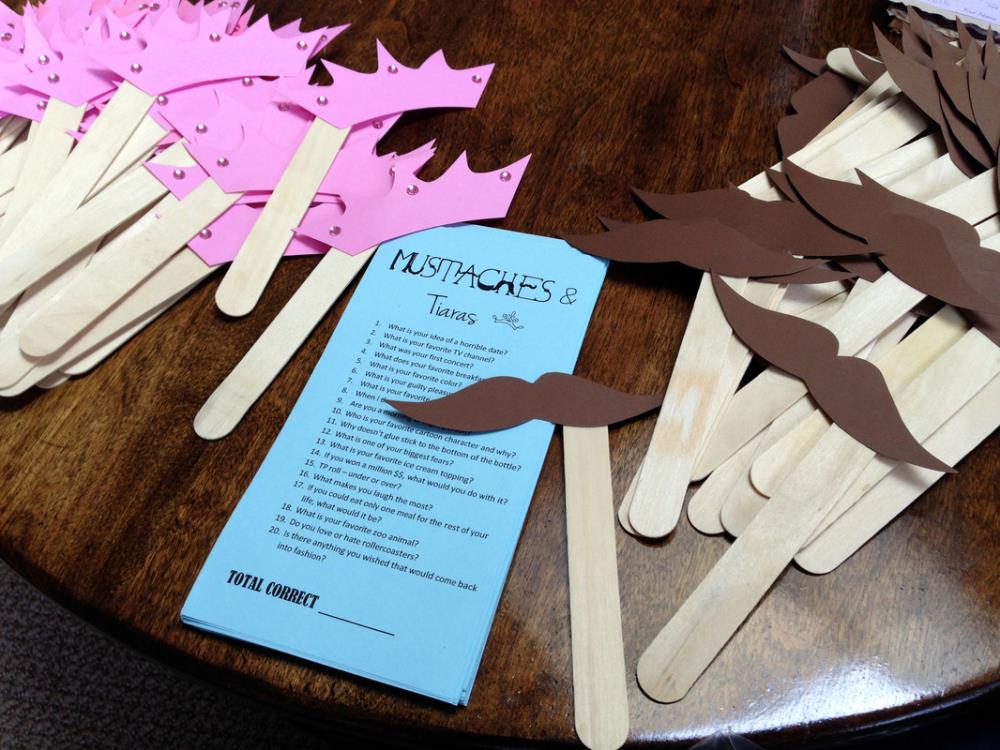 In addition to our home projects, I always have a crafty project (or two) up my sleeve. A few months ago, I was asked to be a bridesmaid at my friend Meg’s wedding, and her sister reached out to me asking for help with fun bridal shower games.

Thinking back to fun bridal shower games, my sister planned a cool game at my shower. She collected a dozen photos of me at different times in my life and projected them onto the wall. The bridal shower guests guessed what year the photo was taken.

Even though I loved the game, putting a version together for Meg would have involved collecting and scanning a lot of photos, not to mention getting their dates correct.

Although it was a fun bridal shower game to play, I probably wasn’t the best person to head up that game.

I thought a little more and remembered my friend Tiff’s bridal shower. Tiff and her closest friends always go all out and plan the most awesome parties.

And, you know that I love a good theme party.

Tiff’s bridal shower theme was Breakfast at Tiffany’s, and everything was so amazing – from the invitation to the party props. (See her awesome invitations)

At Tiff’s bridal shower, we played the best bridal shower games. One of them was called Mustaches and Tiaras and it had bridal shower game questions about the couple. And, there were props! Everyone got tiara and mustache props (card stock cutouts glued to popsicle sticks).

Contents hide
1 How to Play this Fun Bridal Shower Game
1.1 The Hilarious Details
2 Ready To Start Making Mustaches And Tiaras?
2.1 MATERIALS
3 Making The Tiaras And Mustaches
4 Getting The Couple’s Game Questions Ready

How to Play this Fun Bridal Shower Game

​To play this fun bridal shower game, each player received one tiara, one mustache, and a list of questions that were asked to the bride and groom ahead of time. It’s basically a game of “Who said it?” with silly props.

The bridal shower questions that the bride and groom answered can include anything from favorite ice cream topping to biggest fear to random questions, such as, “Why doesn’t the glue stick to the bottom of the bottle?”

The bride and groom answer these questions about themselves and then submit them to you, ahead of time. They aren’t allowed to share answers.

From the bride and groom’s responses, prior to the party, you chose one answer to be read aloud.

Then at the party, you read the question and then the one answer you chose. The guests needed to decide if that answer was the bride’s answer or the groom’s answer.

Once in a while, there’s an answer that both the bride and the groom gave, and then the party guests hold both the tiara and the mustache up.

​When you see a sea of faces staring back at you with tiaras and mustaches held up, it’s pretty funny! (Check out some great pictures of this game being played at Tiff’s shower on her blog).

Here are the mustaches and tiaras, along with the question cards that I made for her bridal shower.

The great thing about this fun bridal shower game is that it’s so low pressure. Everyone can participate and have a good time. There aren’t any fill-in-the-blank parts about how well guests know the bride or questions about milestones in the bride’s life. The bridal shower game is easy on the attendees, always gets a good laugh, and fun to create!

Download the free templates below – and you’ll have all of the templates you need for this hilarious bridal shower game!

I used this pink paper (lots of shades to choose from and use for later projects too), and I used the brown paper in this collection. I didn’t need too many sheets of brown and liked the other paper colors this pack had.

Making The Tiaras And Mustaches

After I cut out the tiaras and mustaches from the pages I printed, I took one tiara and traced as many as could fit on a piece of pink paper, and then cut these out. I continued to do so until I had the number I needed.

You could also print as many sheets as you need directly to the printer, rather than tracing. I preferred to save some scrapbook paper and not burden myself too much with our testy printer.

Then, I simply hot glued the tiaras and the mustaches to the popsicle sticks. I made sure the traced version was face down, in case any pencil marks came through.

Last, I placed a few adhesive gems on each tiara, which made for a great final touch.

Getting The Couple’s Game Questions Ready

Email your bride and groom with the list of bridal shower game questions well in advance, so you have time to read through them and decide which responses you will announce for each question. That’s part of the fun!

When choosing the responses for this fun bridal shower game, I tended to go for the funny ones because everyone loves a good laugh at a bridal shower.

​I also tried to have an equal number of responses from the bride and groom. Additionally, I had at least 3 “boths” thrown in there too for good measure (and more laughs).

Be sure to make yourself a good answer key for the bridal shower game. It will help with easily referring to that when reading the correct responses at the end.

For the question cards, I simply printed these on regular blue paper (blue because that’s what I had). For efficiency, I formatted the questions so fit two on each sheet.

I was so busy running the bridal shower game that I simply forgot to take pictures of the guests with their tiaras and mustaches.

However, here’s one of our favorite pooch, sporting the props with just a little bit of help. 🙂