In addition to our home projects, I always have a crafty project (or two) up my sleeve. A few months ago, I was asked to be a bridesmaid in my friend Meg’s wedding, and her sister reached out to me asking for help with fun bridal shower games.

Thinking back to fun bridal shower games, my sister PK planned an awesome game at my shower. She collected a dozen photos of me at different times in my life and projected them onto the wall. The bridal shower guests guessed what year the photo was taken.

Even though I loved the game, putting a version together for Meg would have involved collecting and scanning a lot of photos, not to mention getting their dates correct.

Although it was a fun bridal shower game to play, I probably wasn’t the best person to head up that game. 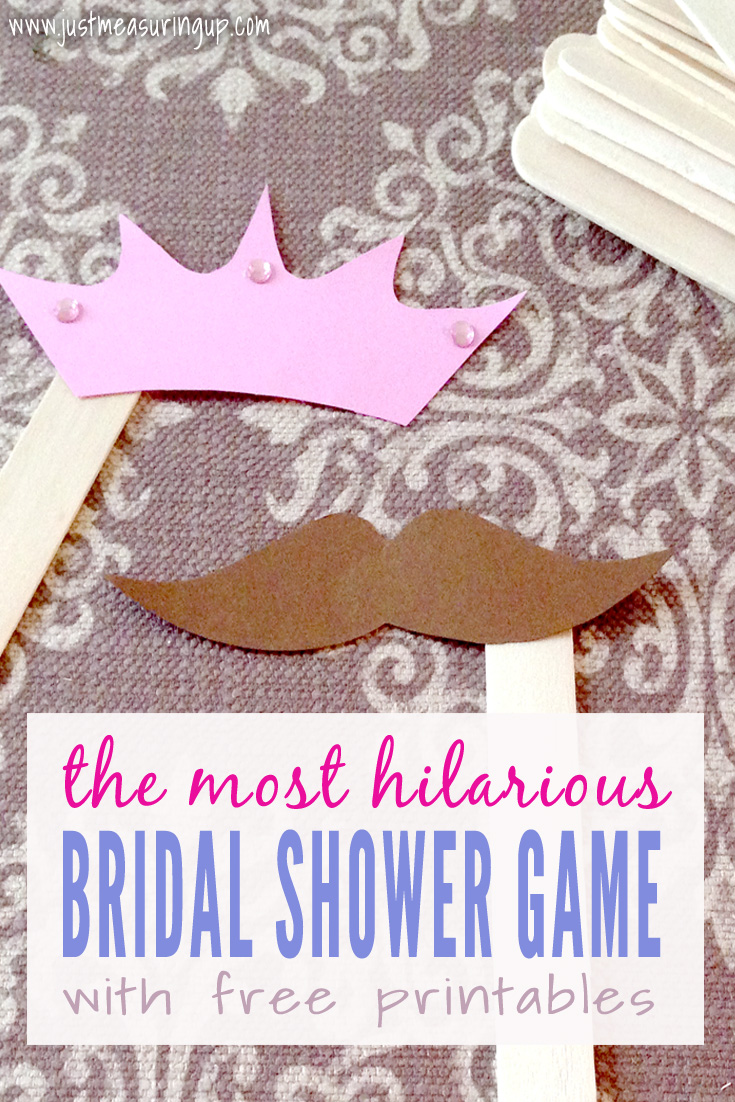 I thought a little more and remembered my friend Tiff’s bridal shower. Tiff and her closest friends always go all out and plan the most awesome parties.

And, you know that I love a good theme party (Check out our Beatles party, Sesame Street party, and Seinfeld party)!

Tiff’s bridal shower theme was Breakfast at Tiffany’s, and everything was so amazing – from the invitation to the party props. (See her awesome invitations)

At Tiff’s bridal shower, we played the best bridal shower games. One of them was called Mustaches and Tiaras and it had bridal shower game questions about the couple. And, there were props! Everyone got tiara and mustache props (card stock cutouts glued to popsicle sticks).

How to Play this Fun Bridal Shower Game

​To play this fun bridal shower game, each player received one tiara, one mustache, and a list of questions that were asked to the bride and groom ahead of time. It’s basically a game of “Who said it?” with silly props.

The bridal shower questions that the bride and groom answered can include anything from favorite ice cream topping to biggest fear to random questions, such as, “Why doesn’t the glue stick to the bottom of the bottle?”

The bride and groom answer these questions about themselves and then submit them to you, ahead of time. They aren’t allowed to share answers.

From the bride and groom’s responses, prior to the party, you chose one answer to be read aloud.

Then at the party, you read the question and then the one answer you chose. The guests needed to decide if that answer was the bride’s answer or the groom’s answer.

Once in awhile, there’s an answer that both the bride and the groom gave, and then the party guests hold both the tiara and the mustache up.

​When you see a sea of faces staring back at you with tiaras and mustaches held up, it’s pretty funny! (Check out some great pictures of this game being played at Tiff’s shower on her blog).

Here are the mustaches and tiaras, along with the question cards that I made for her bridal shower.

The great thing about this fun bridal shower game is that it’s so low pressure. Everyone can participate and have a good time. There aren’t any fill-in-the-blank parts about how well guests know the bride or questions about milestones in the bride’s life. The bridal shower game is easy on the attendees, always gets a good laugh, and fun to create!

Download the free templates below – and you’ll have all of the templates you need for this hilarious bridal shower game!

I used this pink paper (lots of shades to choose from and use for later projects too), and I used the brown paper in this collection. I didn’t need too many sheets of brown and liked the other paper colors this pack had.

Making the Tiaras and Mustaches

After I cut out the tiaras and mustaches from the pages I printed, I took one tiara and traced as many as could fit on a piece of pink paper, and then cut these out. I continued to do so until I had the number I needed.

You could also print as many sheets as you need directly to the printer, rather than tracing. I preferred to save some scrapbook paper and not burden myself too much with our testy printer.

Then, I simply hot glued the tiaras and the mustaches to the popsicle sticks. I made sure the traced version was face down, in case any pencil marks came through.

Last, I placed a few adhesive gems on each tiara, which made for a great final touch.

Getting the Couple’s Game Questions Ready

Email your bride and groom with the list of bridal shower game questions well in advance, so you have time to read through them and decide which responses you will announce for each question. That’s part of the fun!

When choosing the responses for this fun bridal shower game, I tended to go for the funny ones because everyone loves a good laugh at a bridal shower.

​I also tried to have an equal number of responses from the bride and groom. Additionally, I had at least 3 “boths” thrown in there too for good measure (and more laughs).

Be sure to make yourself a good answer key for the bridal shower game. It will help with easily referring to that when reading the correct responses at the end.

For the question cards, I simply printed these on regular blue paper (blue because that’s what I had). For efficiency, I formatted the questions so fit two on each sheet.

I was so busy running the bridal shower game that I simply forgot to take pictures of the guests with their tiaras and mustaches. However, here’s one of our favorite pooch, sporting the props with just a little bit of help. 🙂
If you are looking for fun bridal shower games, definitely look no further! This laid-back, hilarious game is one of the most fun bridal shower games – and it’s easy for all to participate and play.

Looking for a great bridal shower gift? Make a wedding milestone wine basket. It’s fun to put together and is such a thoughtful gift! Be sure to download your free year of first wine labels.

Recently, I took a little break from the home project list to work on some crafty things for my dear friend Meg’s bridal shower (check out the funniest bridal shower game we did too).

After scouring the Internet, I couldn’t find what I needed – so I created my own. I’m including the printables for you too!

First, I choose 12 occasions that Meg and Steve would celebrate during their first year of marriage.

I wanted to pick milestones that they would definitely enjoy their initial 12 months of being married, such as first Christmas, first Valentine’s Day, first snowfall.

I didn’t want to use occasions such as first baby and first home – because those milestones might not be in the couple’s immediate plans.

Next, I needed tags to go with each milestone.

I used cute poems that fit the occasion and I fitted them all to one sheet of paper with the titles running vertically.

This made it easy to print just one sheet of paper for all of the tags.

The wedding wine basket tag is a PDF, and it is not personalized, meaning none of these poems include the bride or groom’s name. Therefore, it’s easy for you to simply print, cut, and attach. No formatting necessary 🙂

First, I printed the wine tag sheet out on thick manila paper. Afterward, I used squiggly scissors to cut out each blurb. Squiggly scissors are my favorite because they hide my lack of ability to cut in a straight line.

The tags were done. Don’t they look cute?!

Choosing the Wines for the Wedding Basket

Ash and I then took a trip to Joe Canal’s, a discount liquor store, for the bottles of wine.

We had a ton of fun, as we ended up matching the occasions to the names of the wines. Although, this wasn’t the initial plan, Joe Canal’s had such a great selection that it was easy and fun to pair each milestone with wine.

Putting the Basket Together

To attach the tags to the wine, I simply cut a piece of ribbon and tied it in a bow around the neck of the bottle.

I then bought a basket from Michael’s and covered the bottom of the basket in tissue paper. Then, I added the title “Quenching Your Thirst Through a Year of Firsts” and a sign that said “Carry from the bottom.”

​Twelve bottles of wine get heavy!​

Overall, the first year of marital bliss wine basket turned out great! My mom, who isn’t normally a fusser, fussed over it every time she came over (I had it sitting on a bench in the mudroom for a few weeks). At the shower, the bridesmaids and guests loved it, raving over it.

​Additionally, a few sweet older women at the shower asked me if they could find the idea on the Internet. 🙂

Moreover, recently a friend of mine was looking for a special gift for her nephew’s engagement party. She asked me if I had any ideas for the couple that had everything.

She LOVED this idea and put together her own, also adding a beer of the month club gift too to keep with the theme. I thought that was another cute idea!

Overall, the milestone wedding wine basket is a creative, fun, and unique project, with plenty of opportunities to add a personal touch. ​And of course, Meg and Steve loved it too.

Thanks for visiting! We are Ash and Eileen, husband and wife DIY bloggers. We love working on projects in and around our home. We hope our stories inspire you to check a few things off your project list! 🙂
END_OF_DOCUMENT_TOKEN_TO_BE_REPLACED
We use cookies to ensure that we give you the best experience on our website. If you continue to use this site we will assume that you are happy with it.OkRead more