I’ve tinkered with the idea of a garage computer for some time.

I use 3D design software for a lot of projects, creating designs on my office computer and then making printouts with handwritten dimensions.

The problem with that is I can’t rotate the objects in the printouts – or zoom in to see more detail.

It would be nice to just have a computer down there in the garage so I can view my model data in a more real-time and interactive format. I could definitely see it boosting my productivity during projects in the garage. It would be like having an interactive garage assistant.

Technically I could just use a laptop down there. However, a workshop filled with sawdust is not ideal for me to bring my laptop in and out of.

So, a dedicated computer customized to better suit my workshop would be superb.

Unique Twist on a Custom-Made Computer

Being a computer guy practically my whole life, I’ve built a lot of computers from scratch. Once you’ve built one, the task becomes pretty straightforward and repetitive.

For my garage computer idea, I wanted to try something different.

Besides, my garage was already full of unique inventions (see my folding workbench or sliding storage shelf project). So, becoming an addition to my garage requires a certain level of oomph.

Here’s what a weekend of work resulted in: 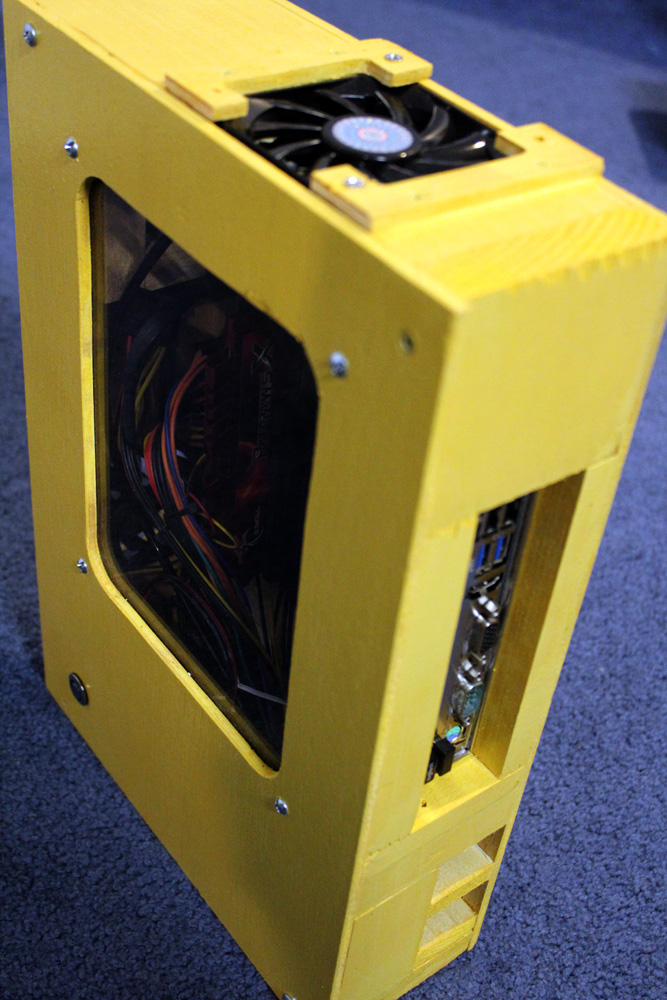 The insides of a computer are fairly standard and not that exciting to look at. To garner attention, you’d want to focus on a fancy exterior.

So for my garage computer to earn an admission ticket into the garage, I decided to figure out how to build computer case out of wood – something I had never done before.

Before I jump into details of my project, it may help a bit to know a little about how computers are built today. So, here’s a quick primer on computer design, in case you’re not too familiar with the topic.

The case just houses all the components. Technically you could build a computer without a case (which I have in the past – you can get pretty creative with a bunch of computer hardware and a milk crate), but leaving all those parts exposed increases the likelihood of physical damage.

Motherboard with CPU and Memory

The motherboard is a large circuit board that almost every part plugs into and allows all these parts to talk to each other. Parts on the motherboard are typically fixed and non-customizable, with the exception of the CPU and memory.

The CPU is the brain of the computer and performs most of the calculations necessary for you to surf the web or do your taxes.

Memory is a necessity for the computer to operate. In general, the more memory you have, the better performance you’ll see, as more programs can run simultaneously.

A hard drive stores all of your programs and documents. The bigger your hard drive, the more data you can keep.

A power supply distributes power from your electrical outlet to the various components inside the computer. Without a power supply, your computer is just a large paper weight.

Cooling fans help maintain a proper operating temperature inside the case. Ideally, you have a fan pulling cool air into your case (where it is heated up by different parts – mainly your CPU) and another fan exhausting the hot air.

That’s it for minimum requirements for building a computer.

Now that you are enlightened, unto my custom build.

How to Build a Computer from Scratch

For this homemade computer, I wanted to make the case as small as possible, so I focused on using small parts to fit the bill. Now that you have a basic understanding of computer parts, here are the parts I used for this DIY computer.

After some motherboard research, I settled on a Mini ITX version. These are small boards meant to fit in small cases.

There are lots of Mini ITX motherboards on the market. The one I bought came with a CPU already. Actually, it was a CPU/GPU hybrid chip (GPUs boost the graphics performance on your computer, like how smoothly I could rotate my 3D designs in tinkercad), so that was a nice bonus. 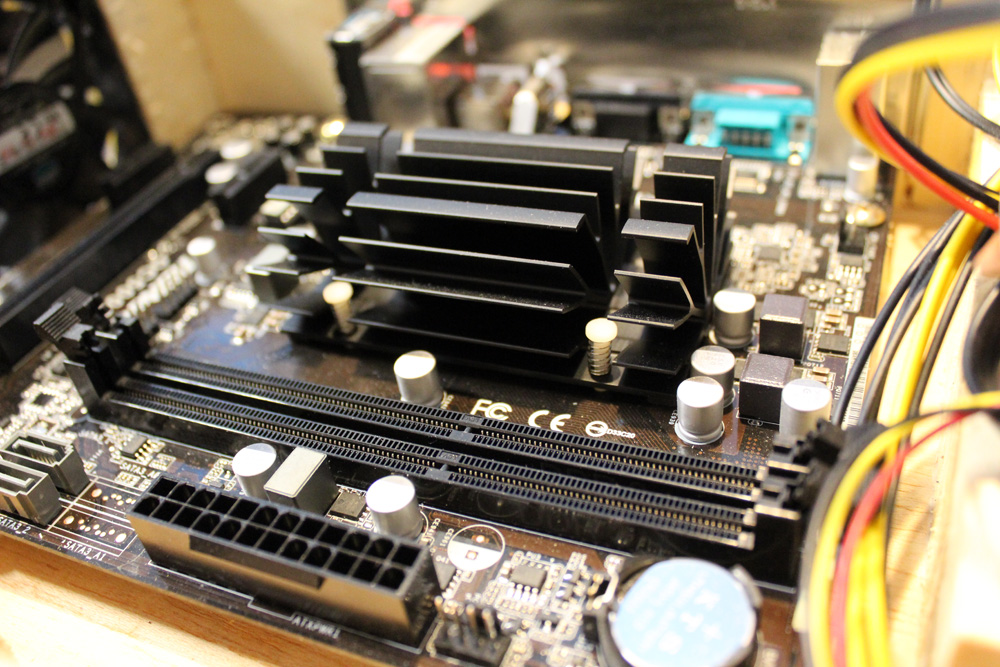 Even better, my motherboard came with a passive cooling system. Most CPUs get really hot and need a metal heatsink (a metal block with lots of fins) and fan directly on top to dissipate the heat.

This extra hardware equates to more space needed in my case.

A passive cooling system ditches the fan for just a low profile heat sink, and relies on the case doing a good cooling job. Passive cooling really only works on low powered CPUs, such as the one that came with my Mini ITX motherboard.

As for the rest of the components, I had a 4 GB memory stick lying around from previous builds that would be adequate for my usage.

I also had a spare 64 GB solid state drive (SSD) that I was able to reuse. An SSD type hard drive was a must-have for this build. They are a lot more reliable than alternative mechanical hard drives, and also take up a lot less physical space.

Here’s the hard drive and memory stick I used:

Finally, for cooling fans, I used spare ones lying around my office: 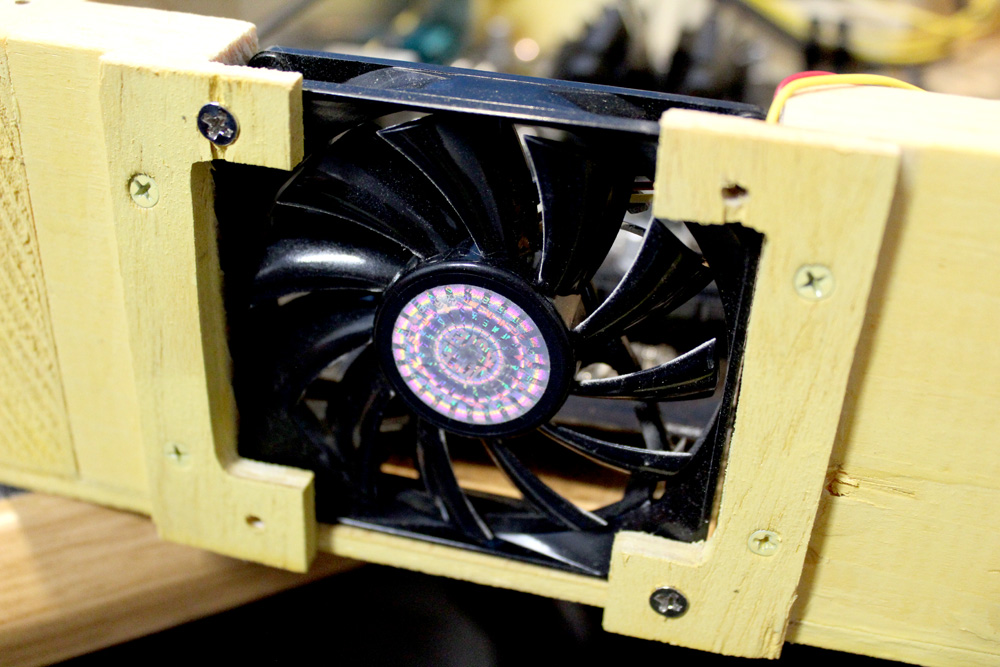 How to Build a Computer Case from Wood

Once the computer was built, I was ready to move on to building the computer case out of wood. It was a pretty simple process.

Constructing the case was pretty easy. Using the measurements from my design, I cut various shapes and lengths of wood. Then I used a combination of wood glue, screws and finishing nails to secure everything together. 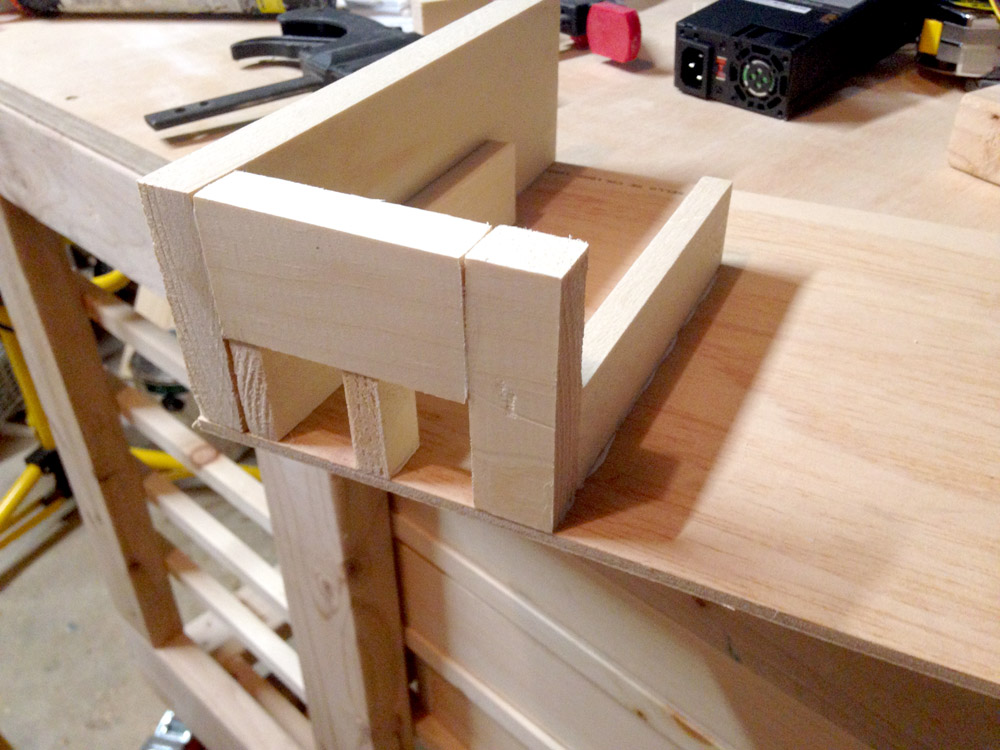 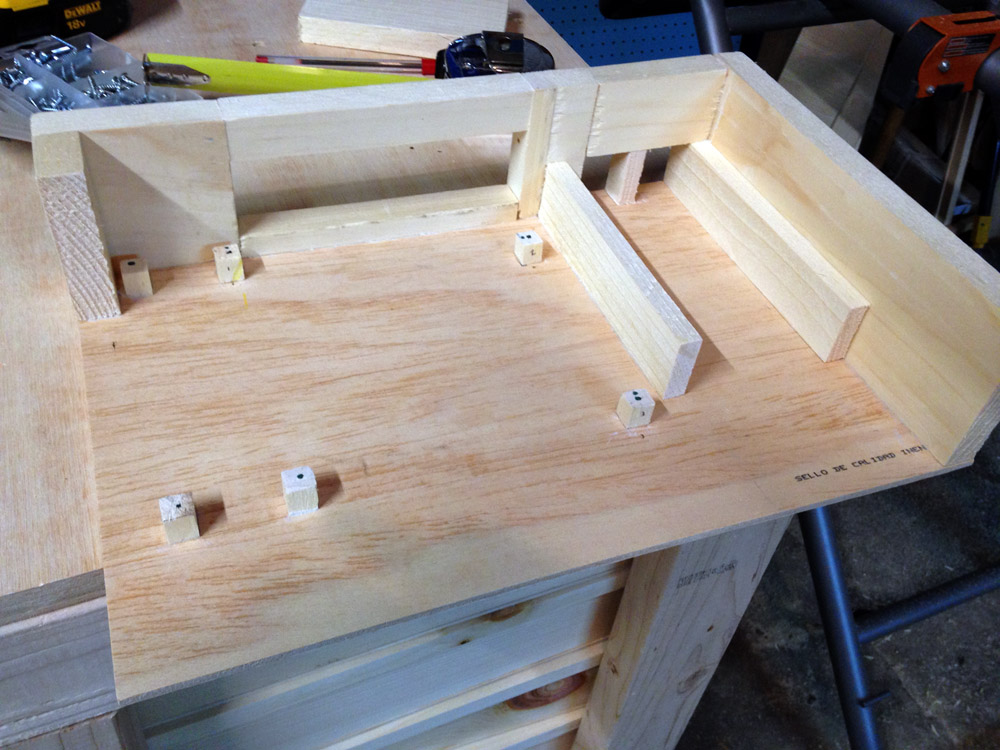 Here’s a close-up of one of the risers, showing a screw that will secure the motherboard to the case: 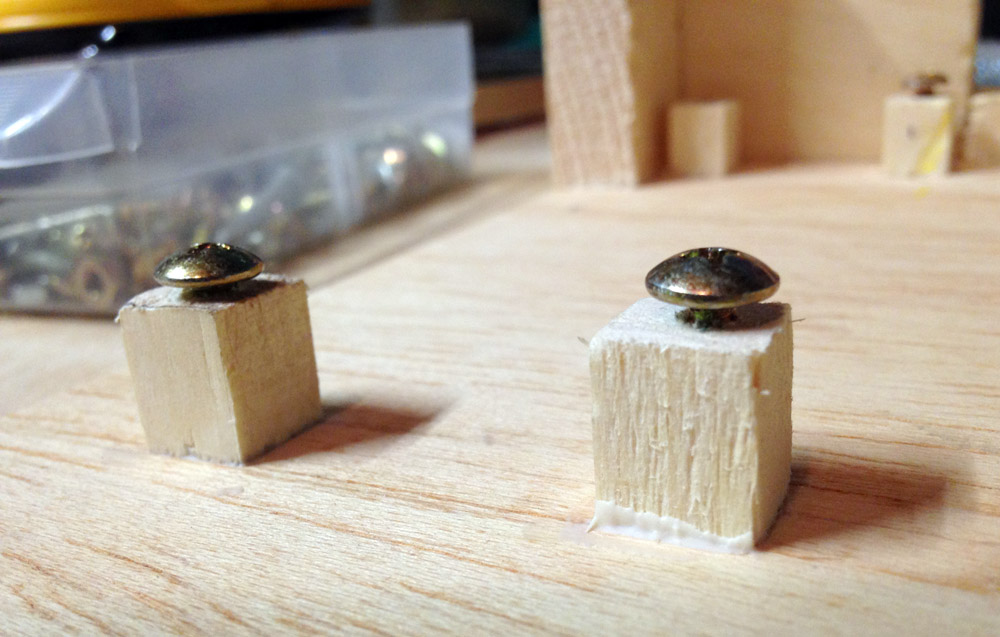 Next I made plywood cutouts for the cool fan mounting brackets: 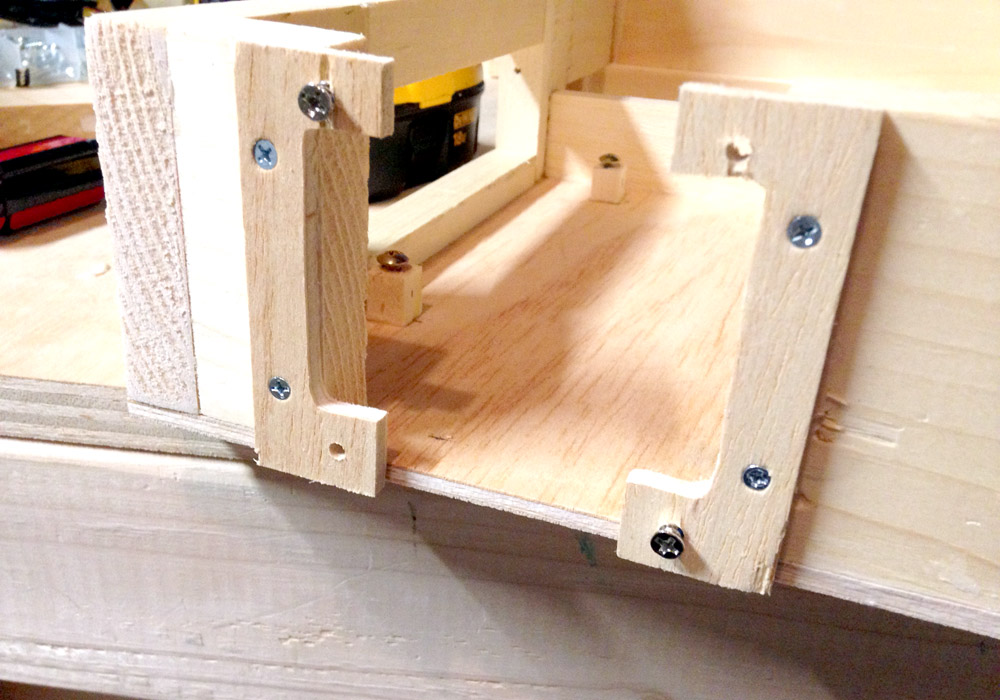 Almost Done with the Case

The case design was mostly completed at this point: 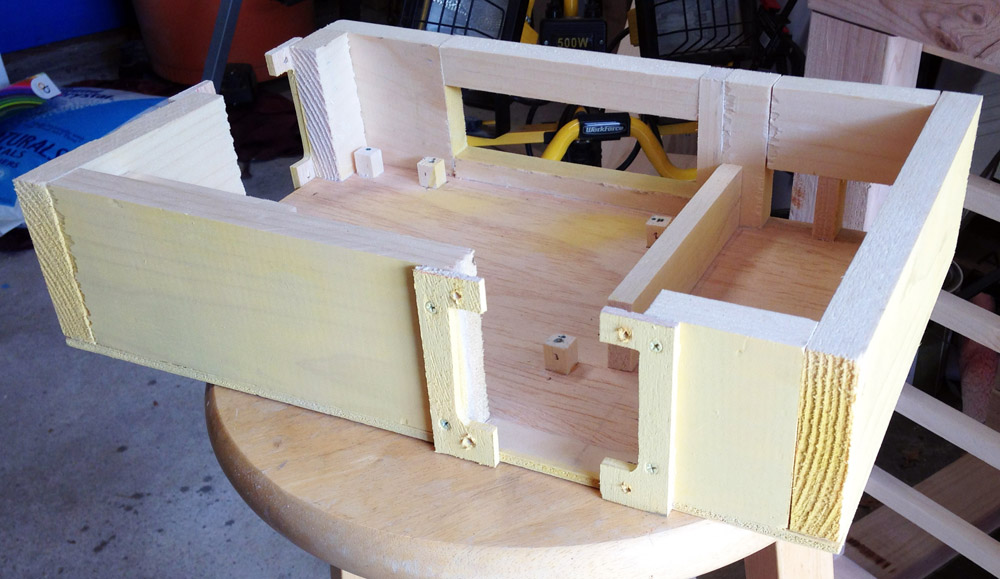 To complete the design, I needed a piece of plywood for the cover. To give the case some more character though, I decided to put a plexiglass window in the cover.

Here I am using a Forstner drill bit to make rounded corners for the window: 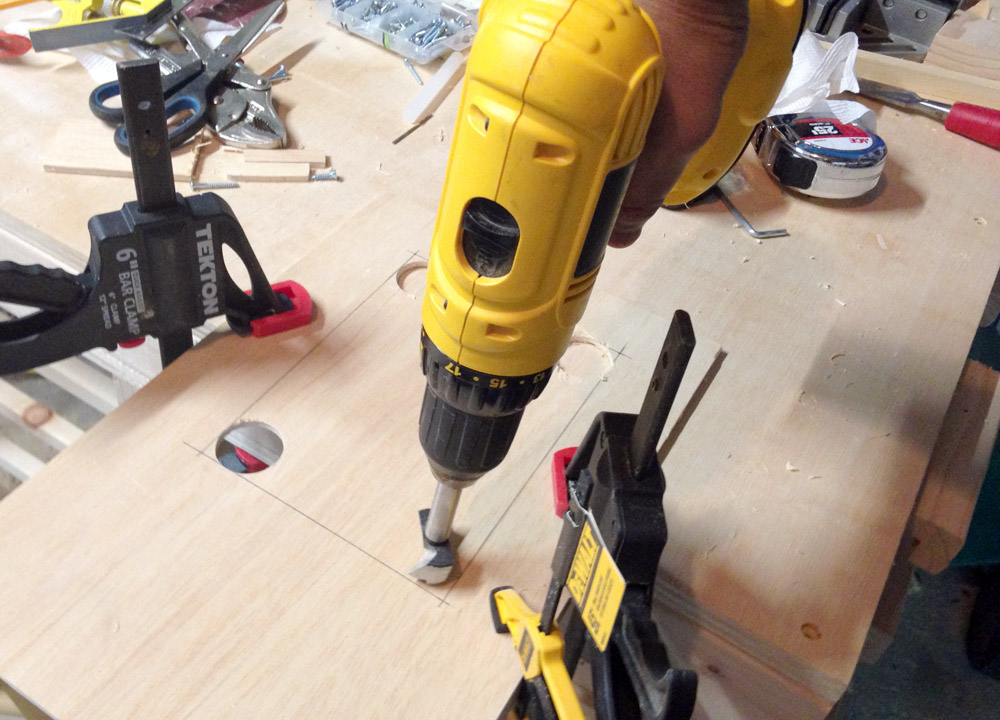 Next I used a jigsaw to cut out the rest of the window:

To install the plexiglass, I cut it slightly larger than the hole. Then I attached it to the cover with some screws. 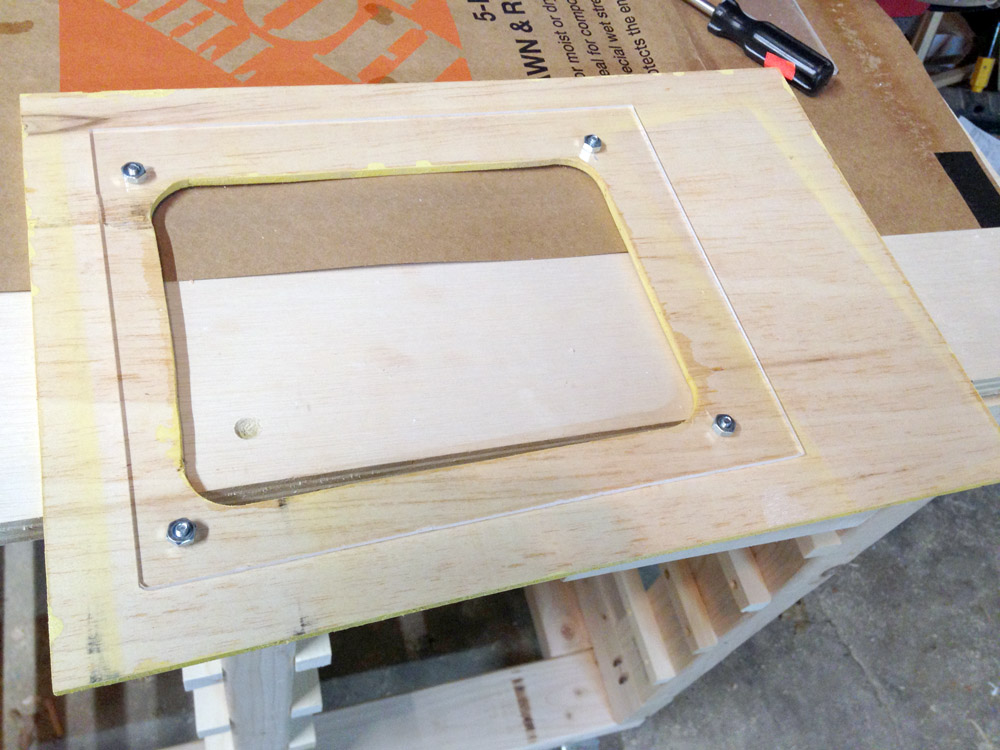 Here’s what the cover looks like from the outside (I had given the cover a coat of yellow paint by now): 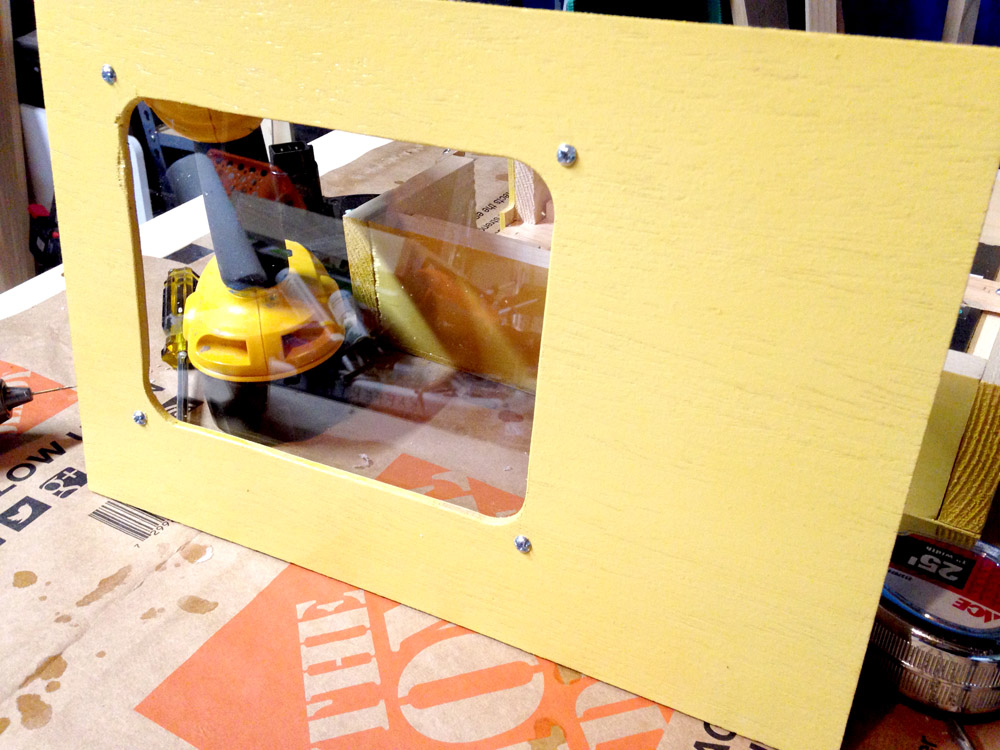 With the whole case spray painted yellow, I decided to give it a few coats of polyurethane to make it shine. 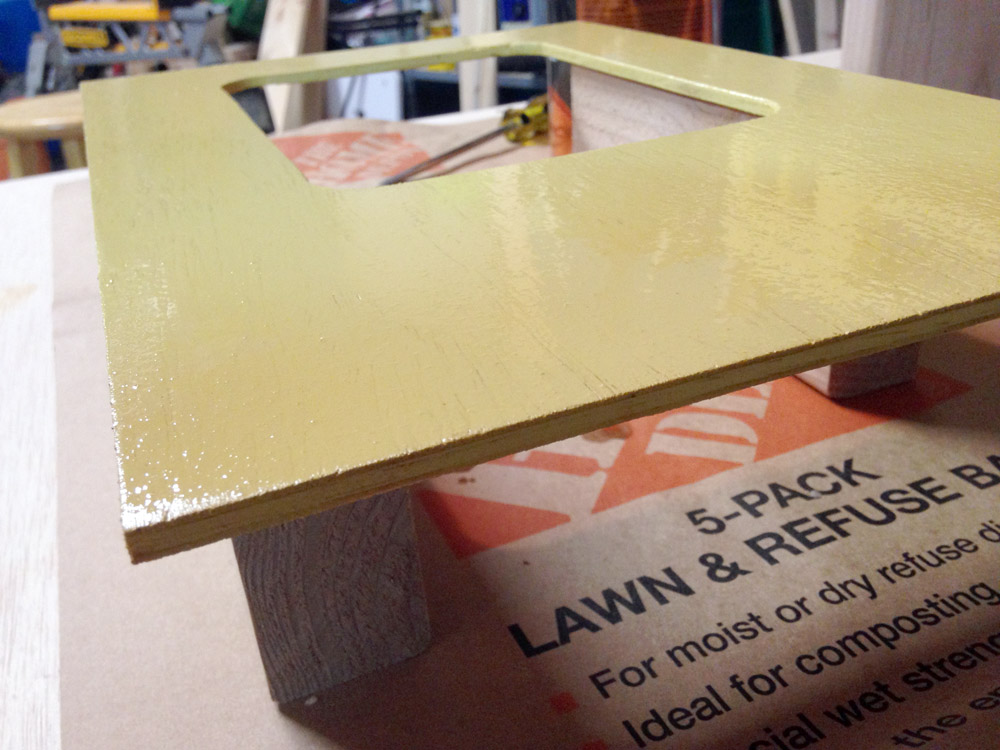 With the case was completed, I could install all the electronics: 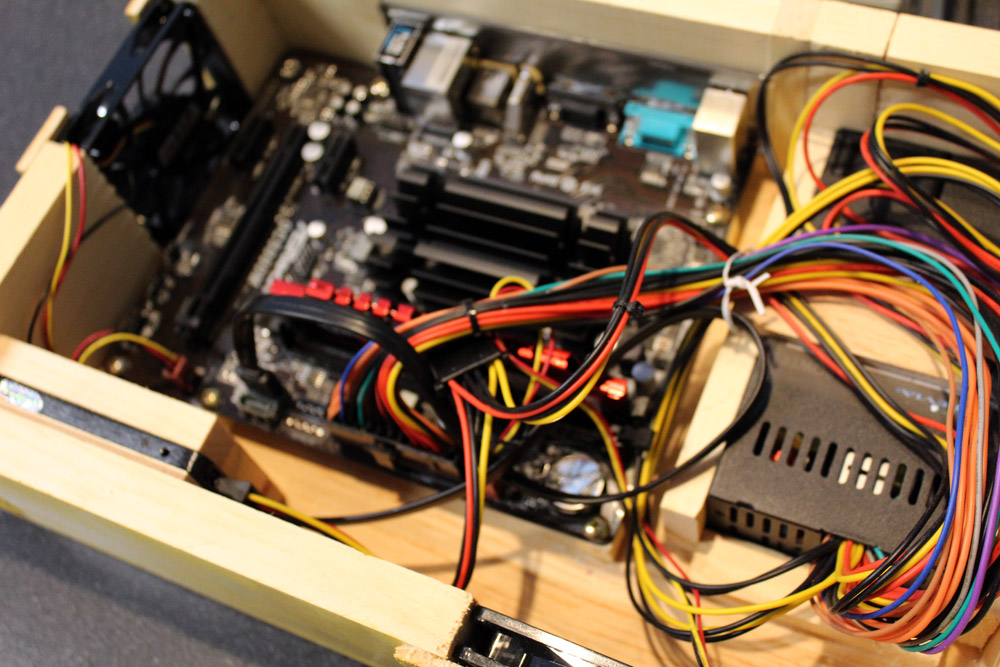 Shining Light on the Situation

For a final wow factor, I added some yellow LED lights to the interior.

Here is the case lit up at night: 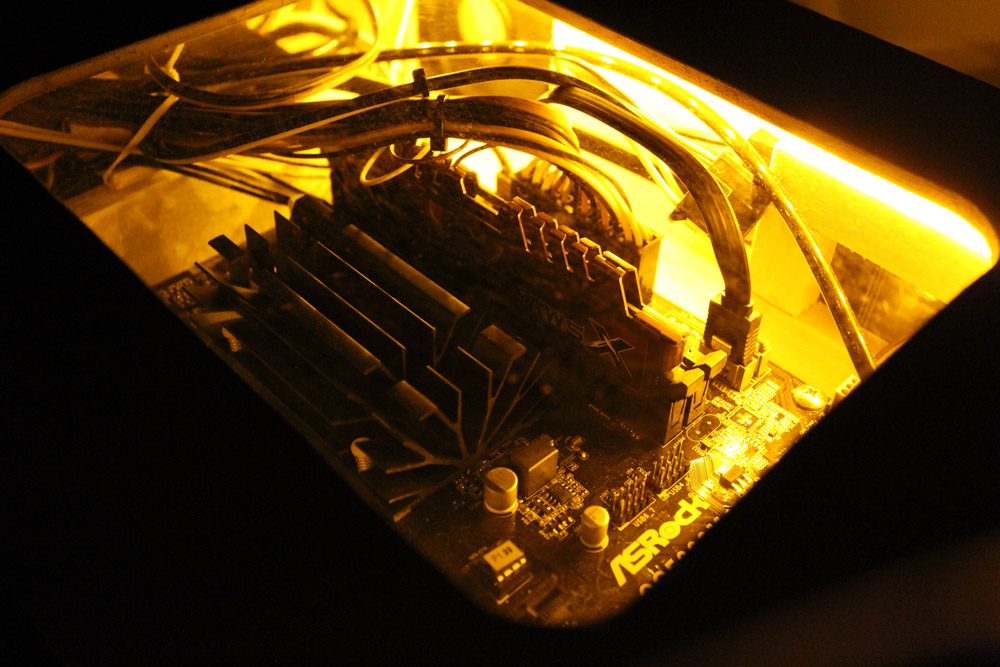 Mounting in the Garage

To install in the garage, I built a simple wooden mount for the computer and attached it to the wall: 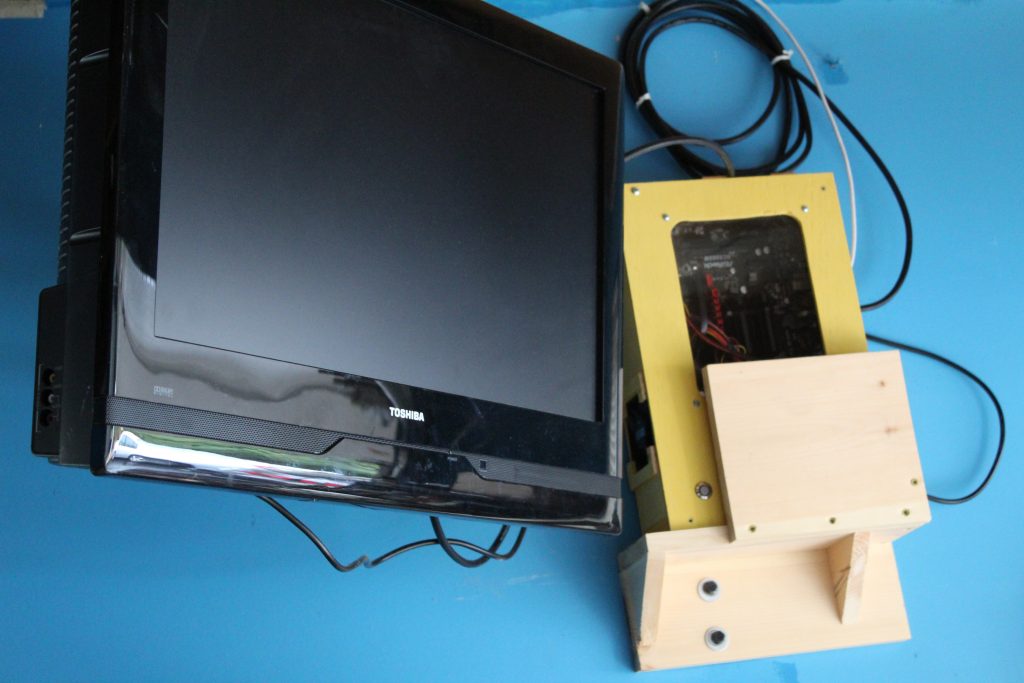 To control the computer from anywhere in the garage, I’m using a mini wireless keyboard with built in touchpad.

I also use a wireless trackball mouse too for when I need extra precision.

This was a really fun project to work on. It put a nice twist on the mundane task of building a computer.

Not only does the computer look really cool in the garage (especially in the dark with the LED lights turned on), but its been a huge time-saver for me.

I just have to look up at the screen when I need measurements for cuts or to plan out last minute design changes.

In total, the project took a weekend to complete (mainly because of the paint/polyurethane drying times). Final cost was around $150 for the electronics.

No cost for the case as it was made from scrap wood lying around the garage.

Have you built a computer of your own? Share your design with me! 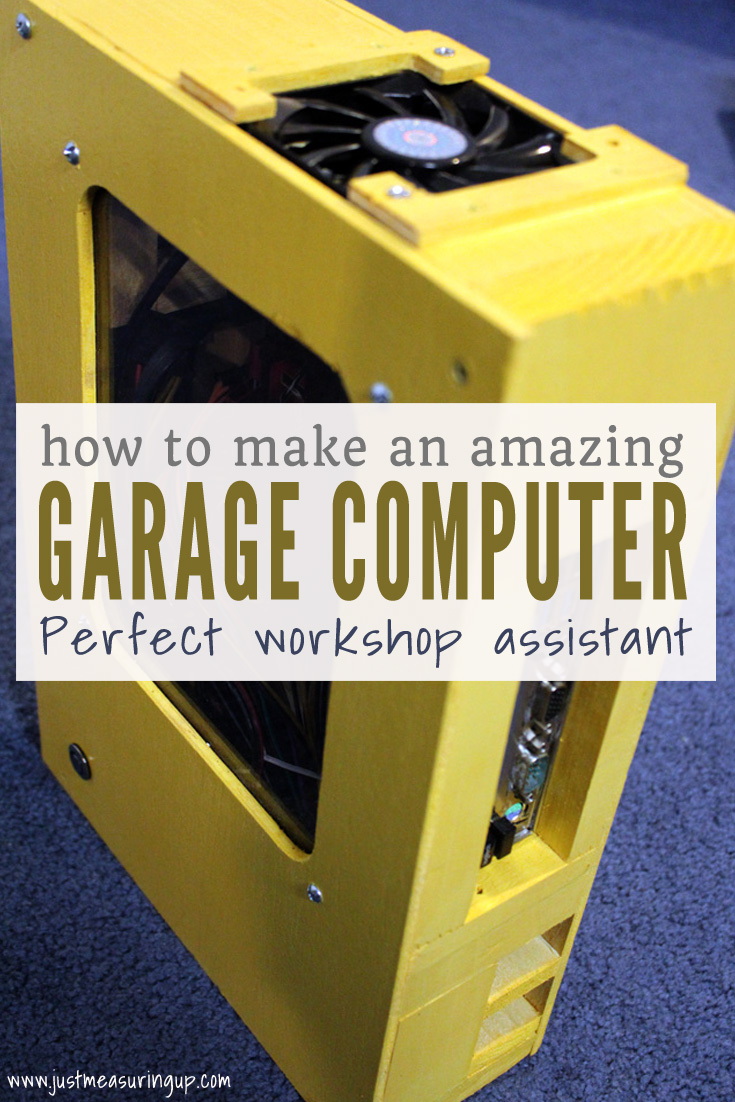 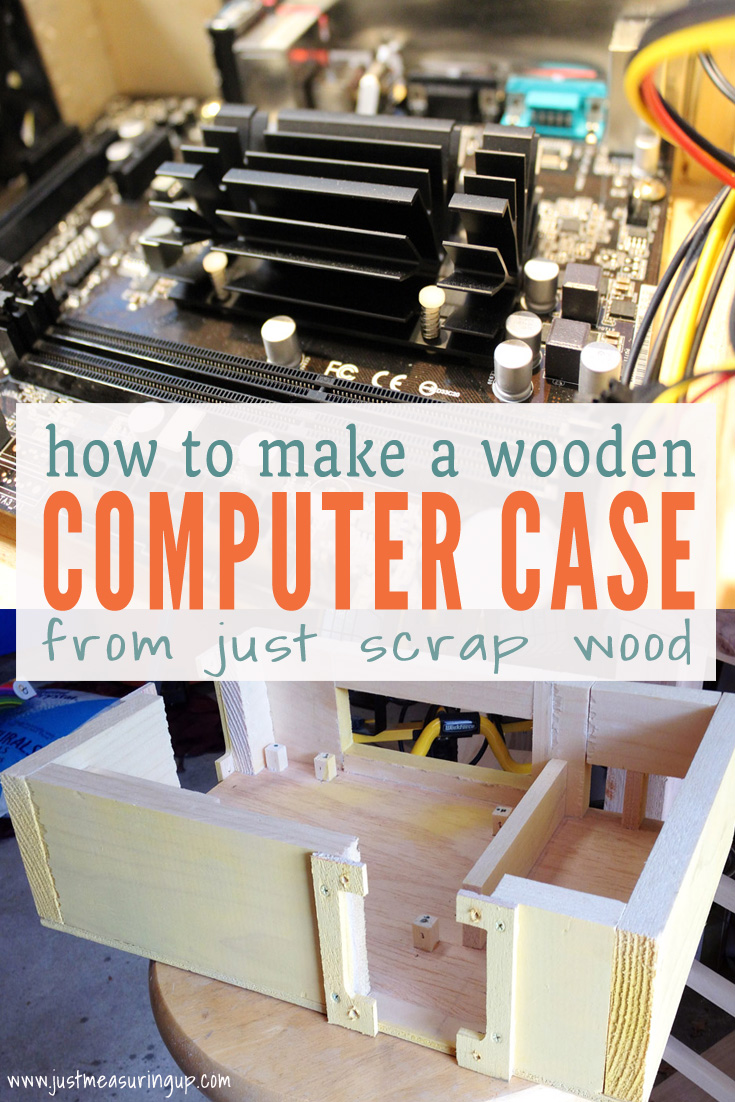