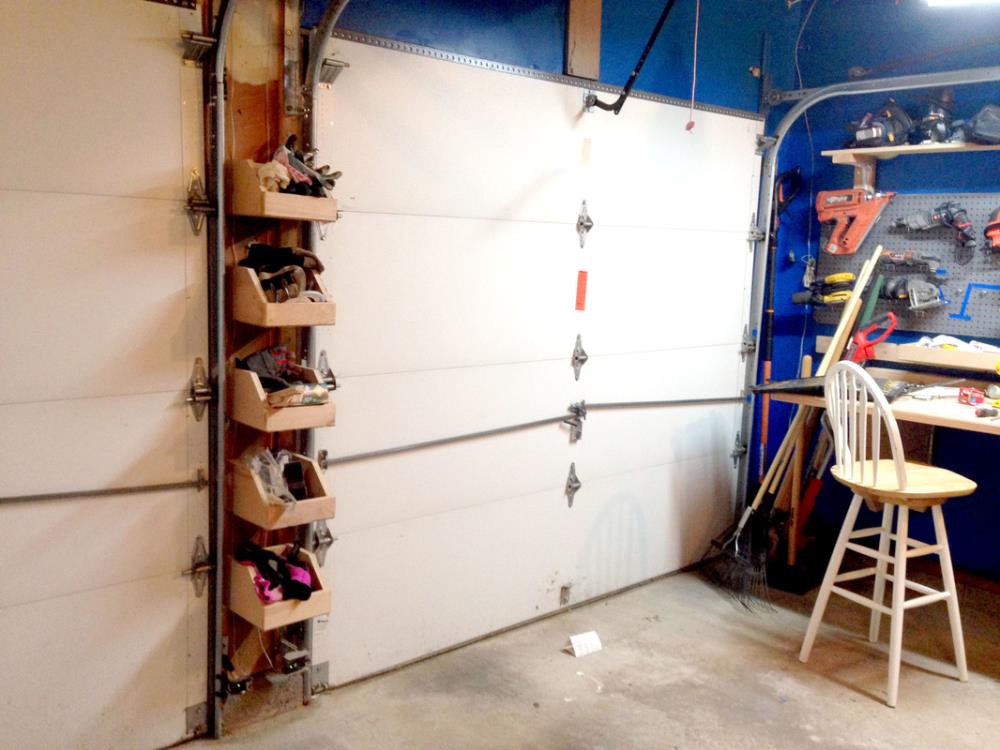 With our garage being my workshop and our primary storage area, it was filled to the brim with tools of all sizes, boxes and boxes of holiday decorations, yard tools and toys, and so much more.

We already did a lot of DIY projects that saved space and created more garage storage. I constructed a folding workbench, which was such an efficient workstation.

In a corner that formerly was a dumping ground of yard tools, I built a sliding shelf tower, which housed all of our holiday decorations. I also had a lot of creative shelves scattered around.

With so many things in our garage, any empty area was prime real estate, no matter how small. 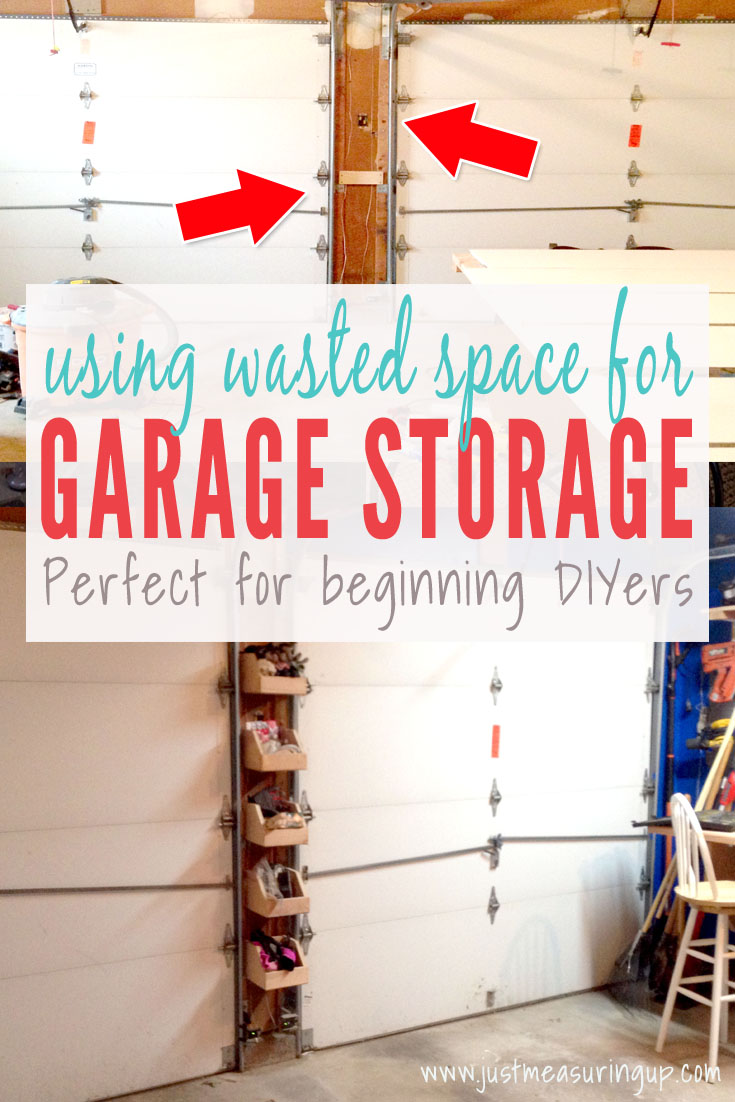 The other day, some wall space caught my eye – the gap between the two garage doors.

Right away I thought that it would be an excellent place for some narrow shelves. Strange that it took me a year to spot the little gem between my garage doors that could provide more garage storage.

Coincidentally, the project I was working on at the time (the built-in bookcase with window seat) produced a lot of scrap birch plywood.

This was expensive stuff – 4×8 sheets sell for $50 at Home Depot. So I wasn’t wasting any cut offs (I was quite inventive in the different ways I reused those scraps).

My shelving idea between the garage doors would be a perfect little project for some of the plywood scraps to get more garage storage.

Simple flat shelves wouldn’t suffice though. With so little space, the shelves would be small, and things could fall off easily.

So instead of shelves, I started visualizing little boxes on the wall. How nice would it be to walk in wearing yard gloves, and have a box to toss them into as soon as I enter the garage?

I took the box idea a step further and considered using French cleats for them.

This would allow each box shelf to be removed by simply lifting it. It would lead to a very modular design where the boxes could be swapped with other ones on the fly.

Rather than digging through a box on the wall to find what I need, or make repeated trips to the wall, why not just take the box shelf with me? Not only would it create more garage storage – but it also would be very efficient.

​Now that’s some clever thinking, if I do say so myself.

I came up with this simple box design below:

Here’s another view of the box design, resting on the wall via the French cleats:

I was excited to get more garage storage from this wasted space – I couldn’t wait to start building. Here’s a TinkerCAD exploded diagram showing in detail how it was constructed:

In the diagram above, the orange piece on the far right is mounted to the wall (to allow the box shelf to drop into and secure to the wall). The rest of the pieces form the box itself.

The wall mounted piece and the other angled cut directly above it (attached to the box) form the French cleat system. I used scrap ¾” birch plywood for the box and French cleats.

For the floor of the box, I used ⅛” thick scrap plywood. I cut all the pieces to size quickly using my table saw, and then miter cut the side pieces for that nice angled profile.

For the French cleat 45 degree lengthwise cuts, I used the table saw again.

Then I used construction adhesive, some bar clamps and my 16 gauge finishing nail gun to assemble the wood pieces into a functional French cleat box shelf.

Technically, I built the first shelf without the nail gun. I just used regular finishing nails and a hammer.

Finishing Nail Gun For The Win

With these types of shelves, the strength comes mostly from the construction adhesive (that stuff is really strong when completely dry). The nails really just hold the pieces in place for the glue to set. So that’s why I used finishing nails.

Also, I didn’t want to risk splitting the plywood scraps, so finishing nails were a good choice due to their thin profile.

As I mentioned earlier, I was in the middle of a bookcase/window seat project at the time. Part of this project involved installing crown molding and baseboard.

I remembered installing crown molding in my previous home, and having an incredibly hard time doing it with finishing nails and a hammer. So, I ended up borrowing my neighbor’s cordless finishing nail gun, and the installation was such a breeze. I just held the crown molding in place, then tap tap tap, and the nails (technically brads) were countersunk, securing the molding to the wall.

So purchasing my own finishing nail gun had long been on my wish list.

I finally bit the bullet and purchased one for my birthday to use on the bookcase project. I also got some angled finishing nails to go along with it.

They arrived in the middle of these French cleat shelves. So the shelves were the perfect opportunity to hone my skills with the gun.

Here’s a picture of me using the finishing nail gun for one of the box shelves:

I originally purchased an 18-gauge finishing nail gun (keep reading to see why I returned it).

For those not familiar with finishing nail gun terminology, the gauge represents the thickness of the nail. I’m using the word ‘nail’ loosely because these nail guns actually fire brads, which are strips of thick wire with a very fine head.

They are great for finishing applications (like securing trim) because the heads make a very small hole and require little work to conceal. The thinness of the brads also reduce the likelihood of splitting the wood when they are driven in.

Finishing nail guns are not to be confused with framing nail guns, which fire actual nails and use substantially more power to drive them (hence also more dangerous). I used a gas powered framing nail gun in my shed project if you are interested.

Anyway, I was saying earlier how I purchased an 18-gauge finishing nail gun. Unfortunately, I was not having a good experience using it with the birch plywood. Most of the nails would fire in straight, but then bend half way and stick out the side of the wood. It was very annoying.

I did some research online and found out that 18-gauge nails don’t work well in hardwoods (like birch) and will do exactly what they were doing with me (changing direction as they are driven into the hardwood).

So I decided to return the nail gun and get a 16-gauge version instead.

The new nails were noticeablely thicker and worked perfectly for me. The gun is now a permanent addition to my top 12 list of must-have tools.

WHAT’S THE BEST NAIL GUN FOR A DIYER?

Unfortunately finishing nail guns can only fire a single gauge, so you’d need multiple guns to accommodate different nail gauges. This is obviously very expensive, and may not make financial sense for you unless you’re a dedicated contractor.

So, 16-gauge is a good compromise because a majority of the projects a typical DIYer works on can be satisfied with that sized nail gauge.

This has held true for me ever since purchasing the nail gun too. I’ve used it for everything from crown molding to shelves to quickly tacking on temporary supports for concreting wooden posts. It’s also my favorite tool, and well-worth the investment.

Finishing Up The Boxes

With the finishing nail gun, construction of 5 box shelves went by very quickly. I only made 5 because I ran out of scrap wood large enough for box shelves. The remaining smaller scraps had another destiny.

​Five French cleat boxes were perfectly adequate for the space allocated though and would definitely create more garage storage and organization.

​Here’s a picture of the completed French cleat boxes resting on the wall (they are empty below, but filled today will all sorts of goodies):

After this was completed, some of the remaining birch plywood scraps got used for another project.

Get More Garage Storage With These Ideas

I was going finishing nail-gun-crazy and just wanted to keep tap-tap-tapping brads. So, I ended up making an incredibly useful battery charging station for my cordless tool batteries.

​The garage storage station consisted of four L shaped shelves fixed to the wall, with two triangular supports each.

Here’s a picture of the empty shelves on the walls so you can get an idea of the design:

Here’s what the shelves look like actually being used. This little nook helped get more garage storage and organization.

I got creative and tacked on an empty plastic nail box to store stationary-like pencils, markers and scissors.

It’s in the perfect location too. Whenever I need a measuring tape, I just open the garage door and grab the tape off the holder. When done, I just snap it back on the holder and it’s there for future use.

A Lot Of Storage For A Little Effort

So that’s it for this round of more garage storage shelving. I constructed five French cleat boxes in the lost space between the double garage doors and added some bonus shelving too. Not only did I create more garage storage but this storage added another level of efficiency to our garage.

I completed everything on a Saturday with no additional cost to me because I used all scrap wood. Although I benefited a great deal from the finishing nail gun I purchased around the same time, it could have been done with just regular finishing nails and a hammer.

​Stay tuned for future shelving ideas as inspiration strikes. I hope this article brought you some inspiration to get more garage storage too.