Build > Shelves & Storage > How to Make a Built-In Bookshelf
This post may contain affiliate links to products we personally use and love.

To put it simply, Eileen has more books than anyone I’ve ever known – books from her childhood, books from college, books of poetry – some she’s read and some she just likes to collect.

But long story short, she was running out of room storing them on a wobbly old shelf – in double rows, and then there were the boxes in the closet. 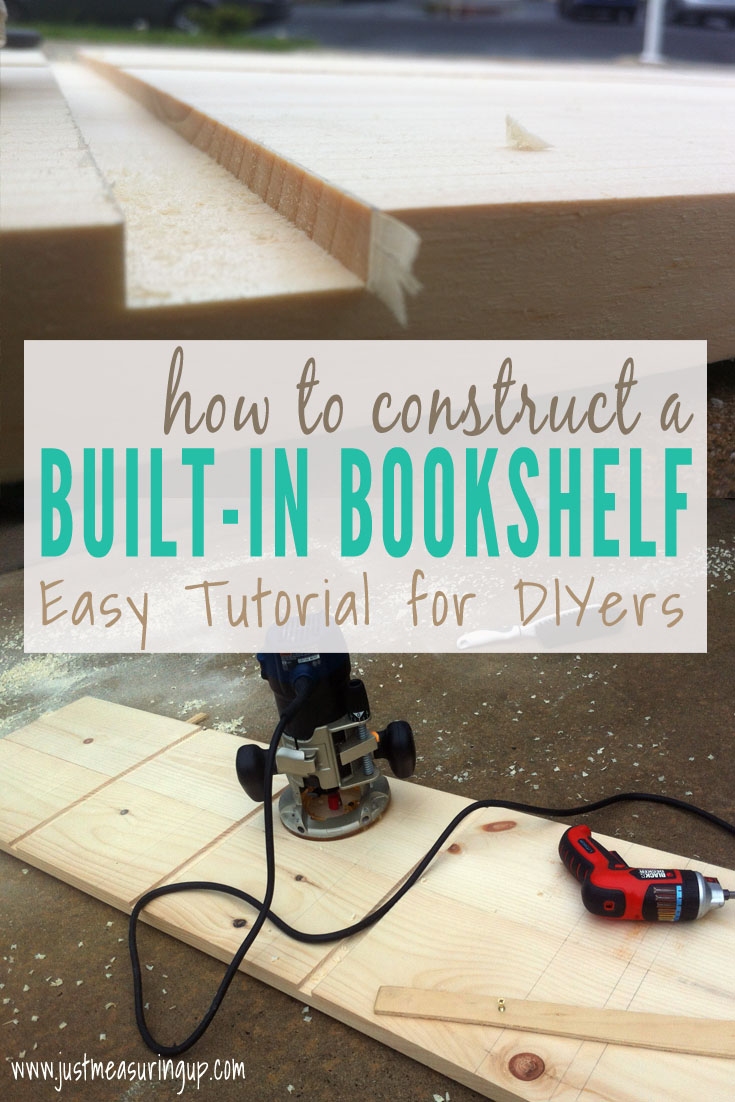 Eileen kept telling me that she had the perfect spot for a built-in shelf, so I pulled out a Post-It note and sketched out a basic design with measurements.

First, I planned out all the cuts I needed for the DIY bookshelf and put together shopping list for Home Depot.

I wanted to make a very sturdy bookshelf with minimal visible hardware. So I opted for dado joints and a center support column. Also, I decided to use pine for the lumber.

I did lack the proper tools for making dado joints, so I added a plunge router to the shopping list.

This was going to be my first router project, and I was looking forward to it very much.

After cutting all the wood planks to pre-measured lengths, the next step was to mark all the grooves for the dados.

Dado joints are the simplest joints there are but are very strong and perfect for bookshelves.

They are just grooves cut into the vertical support planks on both ends of the bookshelf, where the horizontal shelves slide right into and rest.

My pine lumber was ¾” thick. So, I needed to use a router bit of the same thickness for the grooves.

After the grooves were outlined on the two vertical support planks, I secured the planks side-by-side to prepare for the routing.

The grooves on the two support planks needed to be in perfect alignment. Therefore, I screwed the planks together from underneath with some strips of scrap wood.

It was important to keep the planks firmly in place to prevent shifting as I cut the grooves.

Finally it was time to use my plunge router.

I did a few practice cuts on scrap wood to get the feel for it and was now ready for the real thing.

For each groove, I affixed a straight piece of wood to act as a jig for the plunger. Without this guide, it would have been impossible to cut a straight line.

Below is a picture of the plunge router and some grooves already cut.

You can also see the outlines I made for the uncut grooves, as well as the strip of wood I used for a guide: 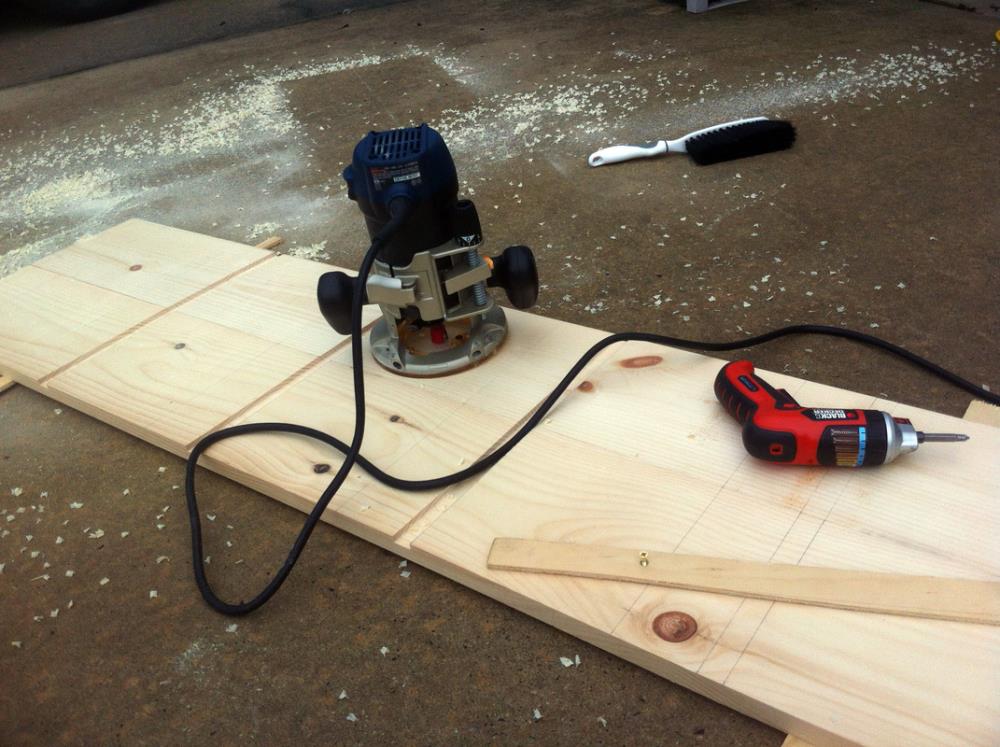 Here’s a close-up view of the dado groove. You can see how smooth the cut was.

The router bit went through the soft pine like butter, making a very professional cut: 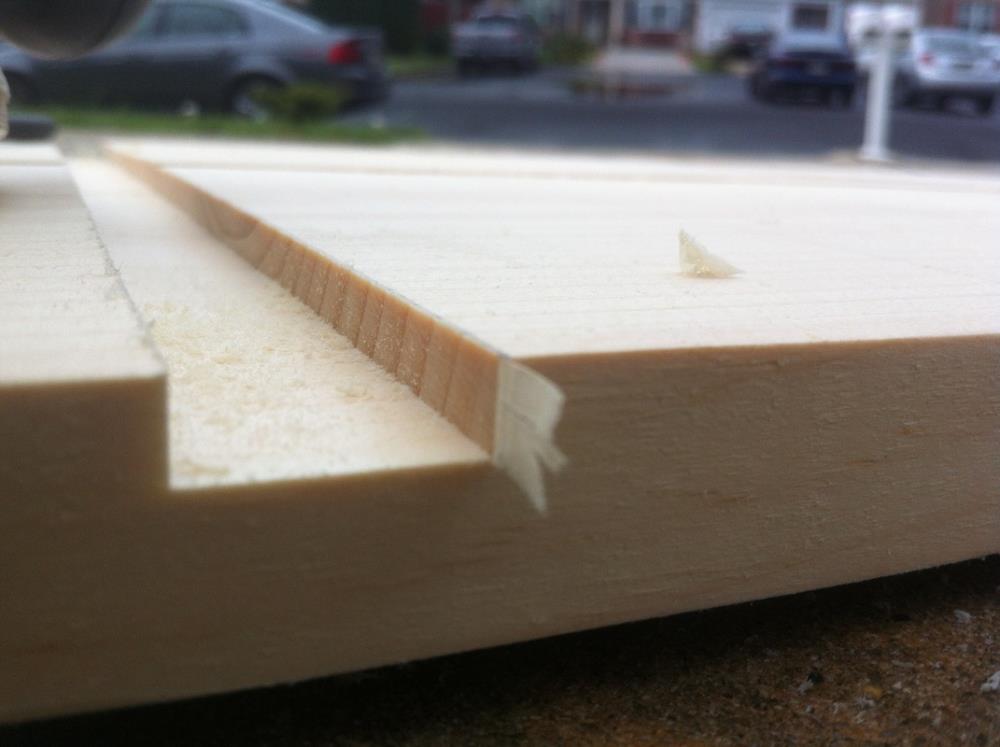 With all the dados cut, assembly of the shelves could begin.

With the help of a rubber mallet, I inserted each shelf into its corresponding dado joint and secured each connection with two screws on the outside.

Here you can see how perfectly each shelf fit into the dado: 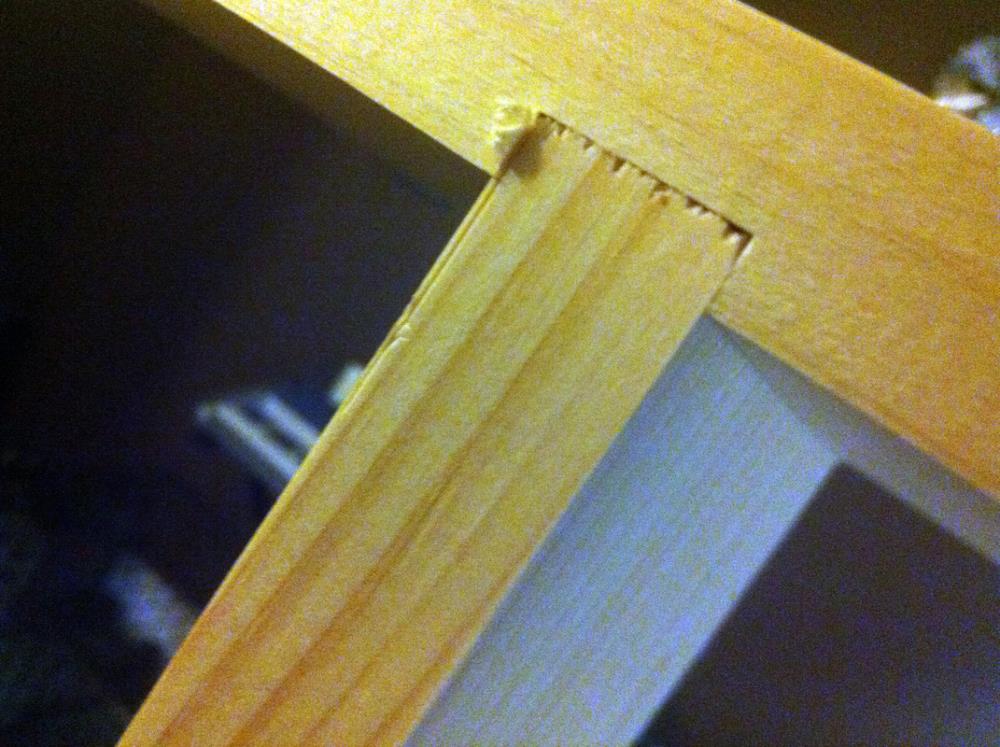 Assembly of the shelves was almost done at this point. 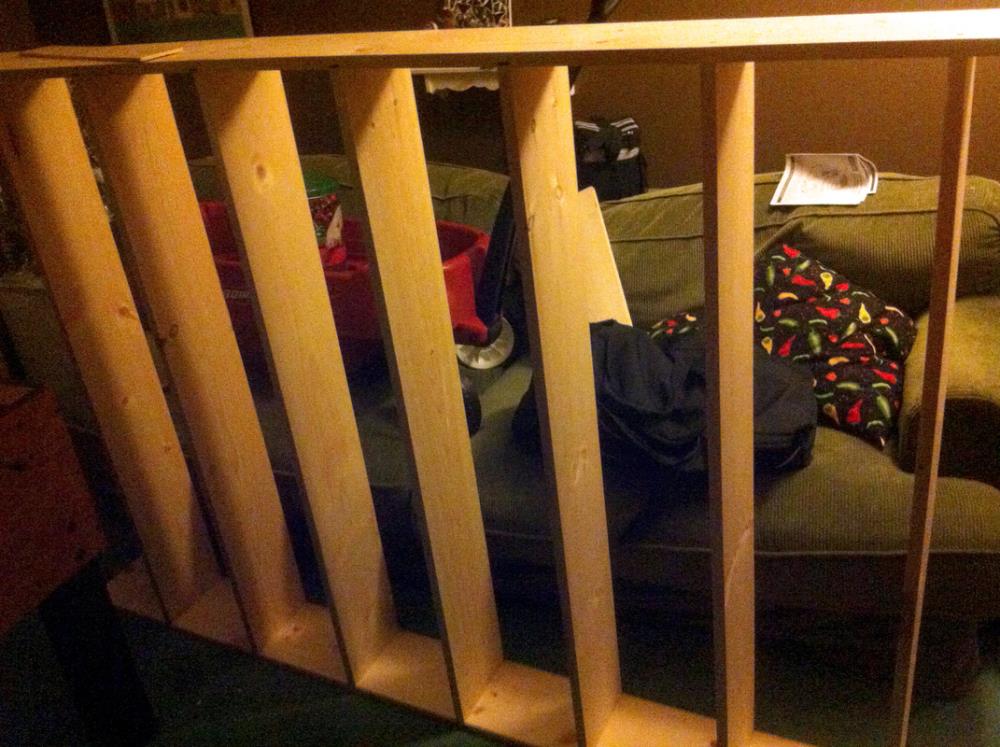 Next came the center support column.

As you can see in the background, I did my work in my man cave. We didn’t have a garage to work in – hence the chaotic background and poor lighting. 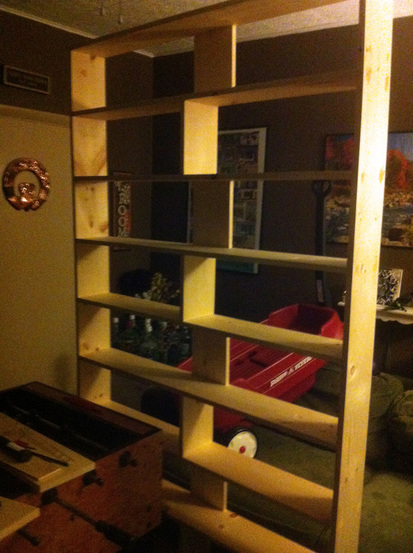 Construction of the DIY bookshelf was completed at this point. All that was left was to fill the screw holes with wood putty and apply a wood stain.

Eileen stained the wood with two coats of a dark MinWax stain. 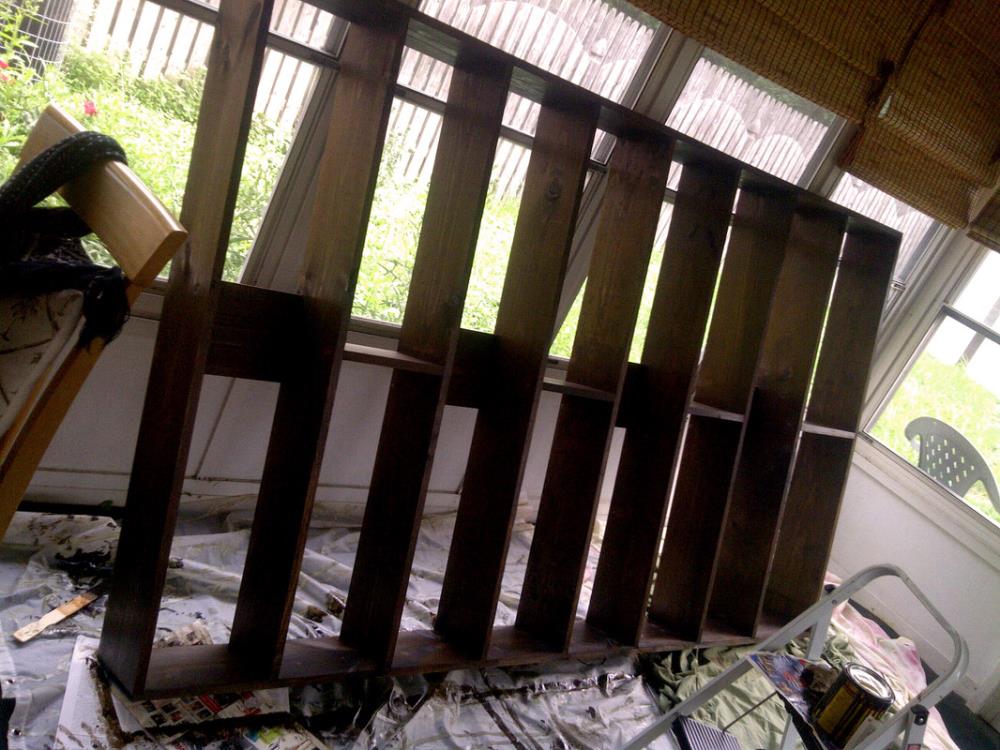 The final step was to secure the bookshelf to the wall in the office.

I used some metal L brackets to attach a few shelves to studs in the wall. I strategically placing them so they would be hidden from view.

Also, I had to remove some of the wall baseboard trim so that the shelf could fit flush against the wall.

Below are pictures of bookshelf bolted securely to the wall.

I wasn’t too happy about the electrical outlet at the bottom left being partially blocked by a shelf. However, it was too late to do much about it now. The outlet wouldn’t be visible anyway because of the books.

Here is the completed bookshelf with actual books. We later replaced that old wooden door to the room with a white six-paneled one – but we don’t have any pictures of that. ​ 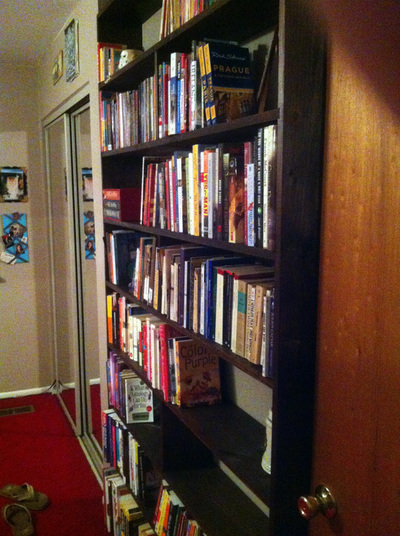 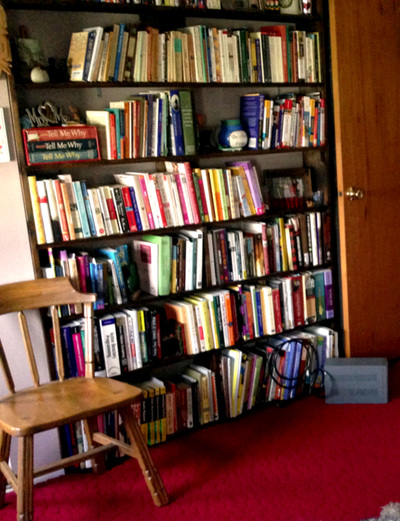 There was no sagging at all with the weight of the books.

Eileen finally had her library organized on this built-in DIY bookshelf. I use the word ‘library’ because who else has enough books to make an Irish Classics section?!

Years later, the shelves remained perfectly straight, thanks to the dado joints and center support column. 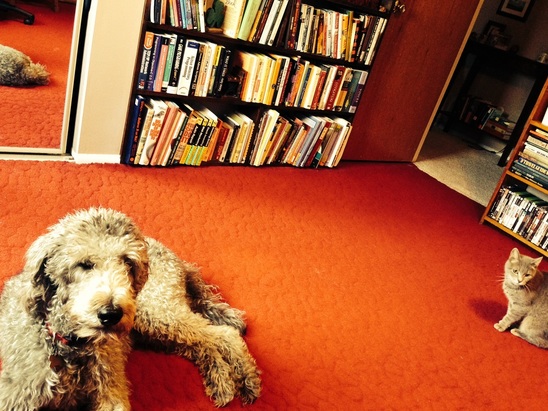 Fast forward a few years, in our new house, I made another DIY bookshelf – a bookshelf with a window seat, using the background I had from designing this shelf.

Thanks for visiting! We are Ash and Eileen, husband and wife DIY bloggers. We love working on projects in and around our home. We hope our stories inspire you to check a few things off your project list! 🙂
END_OF_DOCUMENT_TOKEN_TO_BE_REPLACED
We use cookies to ensure that we give you the best experience on our website. If you continue to use this site we will assume that you are happy with it.OkRead more