For many years, I’ve been an avid amateur boxer, always looking to have a good sparring match in the ring with whoever is game.

Lately, though, it had been hard to make time for the gym, so I wanted to do a lot of my training at home, where it’s more convenient.

I already had a cheap freestanding heavy bag (with the plastic base that you fill up with water – it was less than desirable but it gave me something to work with).

I also have a double-ended bag (attached to a ceiling rafter in the basement and to a water-filled base on the floor) and a slip bag (maize ball) that I mess around with as well.

Yet, what’s a good boxing workout without some rounds on the speed bag?

I had purchased a cheap speed bag platform many years ago and had it mounted in my previous home.

However, it never got much usage because it was secured to some wall studs that would literally shake things out of my kitchen cupboards on the other side of the wall.

Also, the house was very small and the noise carried everywhere.

After moving into our larger home, the question of where and how to mount my speed bag lingered in the back of my mind for a long time.

I really wanted it in the basement with my other boxing equipment, but the ceiling was really low. It would be awkward to hit the speed bag at that height.

Also, remembering back to cereal boxes falling out of the cupboards at my previous home, I was worried about the vibrations traveling up through the ceiling rafters and having repercussions upstairs.

I eventually decided on the garage as the ideal location.

The ceiling was very high, so I could set the speed bag to whatever height I wanted.

There was no second floor above the garage so no foreseeable issues with vibrations affecting things upstairs. Also, the garage insulates sounds pretty well.

So as how many of my projects start, I did a lot of staring (at the garage ceiling for inspiration).

Finally, it came to me. I would mount some type of contraption close to the center of the garage.

Even with both cars pulled into the garage, there was a center aisle that was open that would be perfect for speed bag workouts.

Determining a Design for the Speed Bag Platform

With the location selected, I had to be conscious of the clearance required for the speed bag platform.

The garage was a busy area for me as it was also my workshop. I did not want to have to keep dodging the speed bag every time I worked on a project in there.

So I thought hard about how I could make a system where the speed bag platform could easily stow away when not in use and be lowered when it was time for a workout.

After messing around in TinkerCAD for a few hours, I came up with a design that eventually produced this awesome thing: 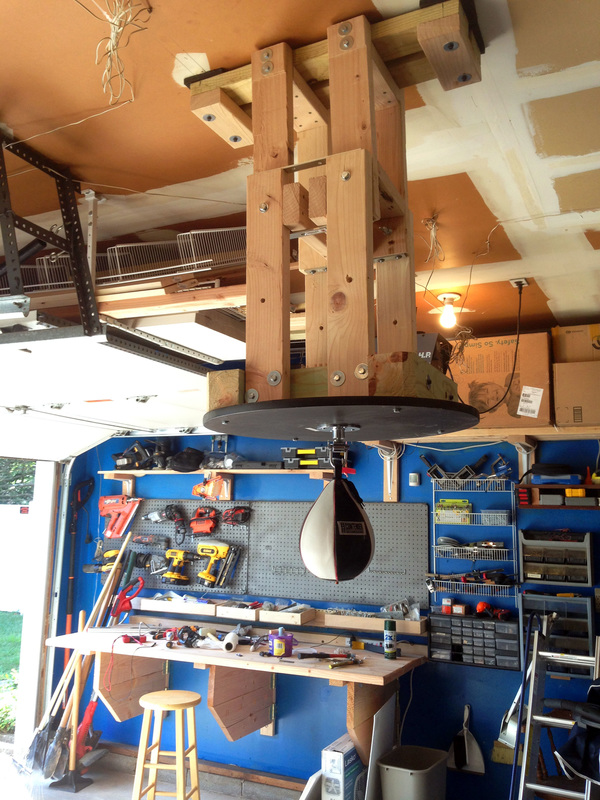 I managed to build it entirely out of scrap wood.

It consists of an upper and lower piece. The top part is a fixed mount attached to the ceiling. The bottom part slides into the top part and allows the speed bag platform to raise or lower.

I used 4 heavy-duty bolts, some washers, and some wingnuts to lock the platform into place when in the desired position.

Additionally, I opted for the wingnuts to make them easy to remove. This was rather than using regular nuts and having to use tools to raise/lower.

I also intentionally went a little heavy on the lower piece using some 4 x 4 wood. I wanted to make a solid rebound surface for the speed bag.

STARTING WITH THE LOWER PIECE

I started working on the lower piece first. I cut the 2 x 4s and 4 x 4s to length according to the TinkerCad diagram and connected them together using construction adhesive, 3” deck screws, 3.5” lag bolts, and even some 6” TimberLok screws.

Here is the lower piece color-coded with TinkerCAD to help explain the order of things:

This was followed by the green part (6 pieces of 2x4s).

I connected the green part to the red part using eight 3.5” lag bolts and washers.

Then the blue part (2 pieces of 4 x 4s) was connected to the red/green part using four 6” TimberLok screws.

Here’s a picture of how it all came together. You can probably tell that the 4 x 4s are pressure-treated due to the green tint, but you can’t always pick and choose with scrap wood:

WORKING ON THE UPPER PIECE

The upper part of the contraption is a little simpler.

Made entirely out of 2 x 4s, here is the completed version of it:

The two long 2 x 4s at the top will rest against the ceiling when mounted.

The two dangling vertical pieces serve as guides to facilitate raising/lowering the platform.

They will also have holes that align with holes on the bottom platform. This allows for bolts to lock the two pieces into place.

I used eight 3.5” lag bolts and washers to secure the vertical supports to the long ceiling 2 x 4s.

The upper and lower pieces were now completed.

Here is what they looked like combined (in the contracted/raised position):

Here is what they look like in the expanded/lowered position:

To keep the two pieces in the raised and lowered position, I drilled matching holes (on the four vertical 2 x 4s) in both positions to allow four heavy duty bolts to pass through.

To prevent the lower piece from falling out of the upper piece during a transition period (when all bolts have been removed and I’m raising or lowering the platform), I planned on screwing on two heavy gauge metal plates on the upper piece to catch the lower platform.

So to mount the contraption, I had to secure the upper part to the ceiling rafters.

In an effort to reduce damage to the drywall ceiling from vibration (and dampen noise as well), I used ½” thick neoprene rubber sheets in between the 2 x 4s and the ceiling.

I purchased an 8 x 8 square of the rubber and cut it into four 4 x 4 smaller squares.

I drilled a small hole in the middle of each square for the fastener to pass through and placed the sheets in between the ceiling and the 2 x 4s.

For the actual fasteners, I opted to use four 6” TimberLok screws to connect everything to the ceiling rafters.

Here’s a picture of the mount (you can see the neoprene rubber sheets in between the ceiling and the 2 x 4s):

With the upper part mounted very securely to the ceiling, it was now time to insert the lower part.

I placed it into the raised position (highest it could go vertically). Then, I temporarily held it in place with just two bolts.

This was when I screwed on the two metal plates at the bottom to prevent the lower piece from falling out of the upper piece.

Here is a picture showing how the metal plates were installed. (You can also see some of the wingnuts from the removable bolts used to re-position the speed bag):

Now that my contraption was mounted securely to the ceiling, it was time to attach the actual speed bag platform.

I just used some lag bolts to secure it.

Here’s a picture from above showing the platform bolted on:

You’ll notice from the picture above that I had to notch the corners of the 4 x 4s. This was so they didn’t protrude beyond the edge of the circular speed bag platform.

Also, the empty square space in the center of the mounting base was intentional.

It allows the speed bag swivel bolts to pass through. It’s also an excellent storage pocket for the removable bolts.

When the speed bag mount is stowed away in the raised position, I don’t need all four bolts in place. So, I just secure two of them and the remaining two get placed in this center square pocket.

Here’s a close-up showing the swivel bolts passing into the empty square hole:

My garage speed bag project was completed, and I was very satisfied with the results.

I did do some acoustic testing to verify the effectiveness of the neoprene rubber dampeners. I set up my phone to record audio from several key areas of the house and worked the bag as hard and loud as I could.

When I played back the recordings, I could not hear the bag at all.  So I was confident that I could now work out whenever I wanted to, and not disturb anyone.

This project was completed over the weekend for under $40.

I kept the cost really low by using all scrap wood.

My only expenses were the rubber dampeners and some of the fasteners. I already had a speed bag platform and bag, so those cut-down costs too.

My platform is really cheap though (I believe I got it at Sears many years ago for $30).

I would like to replace it at some point with a solid piece of wood.

If you get a similar platform, at least get a decent bag (FYI smaller bag=faster rebounds, larger bag=slower rebounds) and a good swivel hook (not the plastic ball-bearing hook that a lot of cheap platforms come with).

Also, I use sandbags (via a heavy-duty training weight bag) on top of the platform to add more solidity to the bag rebounds. It reduces a lot of vibrations as well.

Here’s a picture of me working out on the bag: