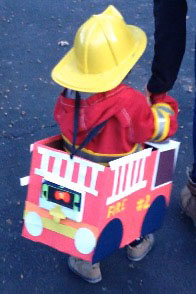 This post will show you how to make a DIY fire truck Halloween costume using materials around the house, such as a diaper box and construction paper.

What do you get when you have a crafty mama and handy, tech-crazed daddy?

A decked-out diaper box that makes all your friends jealous.

Our sweet little guy rocked an awesome costume this evening – a firetruck made from a diaper box complete with blinking lights and sound effects.

The poor thing was a monkey more than once (hey, when the costume fits…), so this year we owed him.

Now that he’s carrying on conversations, I had been asking him for weeks what he wanted to be for Halloween, and 80% of the time he said a firetruck.

I tried to clarify, “You mean a fireman?”

I got a very definitive response, “No, mommy. A fire truck.”

I always save diaper boxes (I usually make storage boxes from them), so I had a ton on hand. I grabbed one and got started on the fire engine costume. How hard could making a DIY fire truck Halloween costume be?

Materials For Making A Fireman’s Coat

If you don’t have time to make the coat, this kids raincoat comes in red and yellow. It looks fireman-y and is a great price!

How To Make A Fire Engine Costume From Cardboard

In making my toddler a DIY fire truck costume, the first thing I did was cut off all of the flaps.

In hindsight, I should have left just one short flap attached, for the front of the truck costume (I added this back with tape later).

Next, in making the fire truck Halloween costume, I covered the whole box with red construction paper.

I meant to run to Dollar Tree beforehand for red wrapping paper – that would have been a lot easier than using sheets and sheets of red construction paper; however, I was set on making the costume that day and didn’t want to lose time running out – or waste money.

So, I used what I had and hot glued red construction paper to the entire box for the DIY fire truck costume.

Next, I hot glued on white construction paper to the front and sides (as seen below) and the top too (the part with the flap).

I then added black windows, and a little design made from shapes and stripes on the front. It was shaping up to be a pretty cool fire truck costume.

After the front was completed, I worked on the sides of the costume. I made similar designs on both sides – so I cut out two of everything. ​I also added wheels to the cardboard costume.

​Just when I thought I was done with this part of the costume, I realized I had forgotten about the back, so I did a quick little design there too (see pics further down).

Below is the cardboard box fire truck costume, made using just construction paper and glue 🙂

How To Attach The DIY Fire Truck Costume

At this point, my little guy was running around the house holding the firetruck diaper box costume up with his hands, so I knew I needed to attach something so he could wear it hands-free.

I found some black ribbon and cut two long pieces.

I then hole punched a hole in the front of the box and back, pushing the ribbon through the holes and tying it.

It worked just like suspenders, holding up a pair of loose pants.

How To Add Lights To The Fire Truck Costume

Just when I thought it was done again, Ash said that it wouldn’t be a firetruck without lights and sound.

So, there he went altering the fire truck costume.

To make fire truck lights, he grabbed a couple of clip-on lights that he goes running with at night.

The lights clip onto your clothes and have a bunch of different settings, including a slow blink which would be perfect lights for a diaper box firetruck costume.

Ash stuck them onto the fire engine costume with plastic cups, cutting out a little piece of the bottom of the cup (which became the top of the light), to clip them on.

How To Add Sound Effects To The Fire Truck

The sound effects were the most impressive part of making a fire truck Halloween costume.

Ash actually attached his iPhone to the back of the diaper box fire engine.

Then he used my phone as a remote, playing fire engine sounds on demand using some custom software he took a few minutes to write.

To securely attach the phone to the fire engine costume, he used a small box we had lying around. So impressive, right?!

How To Make A Fireman’s Coat For A Halloween Costume

The last part of making a fire engine Halloween costume was figuring out the fireman’s hat and coat.

Thinking ahead, I picked up a plastic fire hat from a giveaway table at a community event not too long ago.

As for the fireman’s coat, I had been procrastinating.

I was thinking about getting yellow tape to run across one of his coats or shirts, but I hadn’t made it to a craft store or Home Depot or any store other than the grocery store.

Then, I remembered my love of felt and found a couple of sheets that I cut up into strips.

I duct-taped them on and ran another half-width piece of duct tape in the middle of the yellow stripe.

The coat I used was a $2 red raincoat that I found at a thrift store months ago – what an unknowingly, perfect find for the fire truck costume.

The coat was the perfect touch to a cute fire truck costume.

In pictures, the fireman’s coat totally looks store-bought. I love when my DIYs look like a store purchase 🙂

The total cost of making a fire truck Halloween costume was nothing! We made it all from things around our house.

I love a project with a free cost!

It took a couple of hours to put together but was totally worth it.

More importantly, our little sweetheart had a wonderful Halloween, in the fire engine costume he specifically requested.

We were a little afraid that he wouldn’t wear the diaper box for too long.

Yet, he got right into the Halloween spirit when he saw the smiles and sweets he was receiving. We even had a neighbor request to save it for her grandson for next year.

Next year, it’s going to be hard to top this year’s diaper box fire engine costume.

What are your most creative Halloween costumes? I’m going to need some ideas :))

Update: We did a forklift diaper box costume the following year, and Buzz Lightyear after that! This year I think we are going old school with a dinosaur Halloween costume.

Check out more Halloween costumes ideas for toddlers – there are some awesome ones here!

More Projects You May Love