How to Build Wall-Mounted DIY Cubby Shelves Post Preview: You will see how you can build your own DIY cubby shelves and mount them to the wall.

If there’s one thing we’ve learned in all of our DIY endeavors it’s that you can do a lot with a little bit of space.

Using just one corner of a room, I’ve been revamping my wife’s craft corner with three things: pegboard, wall-mounted cubby shelf, and some simple wall shelves.

In our previous post, I shared how we mounted the pegboard, and in this post, I’ll be sharing how I built the cubby shelves. Afterward, I’ll share how I built the simple shelves (which are a gem as they hold 8 fabric storage bins!).

How to Build Homemade Cubby Shelves

My wife was really excited about the cubbies, knowing they would bring a lot of organization and storage to her craft room.

She had so many paints and other crafts that would fit perfectly onto cubby shelves. With cubbies being open, it makes things easy to find  and quickly grab. Since everything is on display, it’s natural to keep it organized.

So, I did some research and came across two popular designs for cubby shelving. The first design used pocket hole screws to hold the cubby shelves in place.

The second design used routed dados for the shelves. I went back and forth about which design I wanted to use.

The pocket hole method was the fastest and easiest to do. I am also a huge fan of pocket holes.

However, I felt that these cubbies needed a bit more craftsmanship. After all, they were going to be in the same room as our recent window seat bookshelf project. So I opted for the routed dado design.

As for the wood, I normally just use the common pine boards sold at Home Depot for most of my projects.

However, the cubby shelves needed an upgrade. Common pine boards are full of surface imperfection and knots. So I opted for their “select” pine boards. It was twice the price of the standard boards, but there was a huge difference in the quality.

I was excited to work with wood of this quality. It was a rare treat for me.

Cutting the Dados for the Cubby Shelves

Now on to the construction of the cubby storage shelves. First, I had to calibrate my router to the correct depth setting. I used a scrap piece of wood and made repeated cuts with varying depths until I got the 3/16” depth required for my dados:

Next, I outlined the dados with a pencil and ruler, and clamped down a piece of scrap wood for a router guide.

I was a little disappointed with my first dado. I’ve done many dado cuts in the past, but for some reason, this one was slightly wavy. The edges were not perfectly straight like I was accustomed to.

I started to worry that something was wrong with the router. Then after closer inspection, I realized that my scrap wood guide fence had small imperfections along the surface.

Thinking this might be the root of my problem, I swapped out the wooden guide fence with a metal ruler, as seen below:

I re-ran the router through the cut and success! The wavy edges went away.

I guess scrap wood isn’t the solution to everything.

I had to be careful using my ruler as a fence for the rest of the cuts though. It provided a very small surface for the router to move along. The router risked slipping over the edge of the ruler and ruining the boards.

So very carefully, I cut all the boards and produced the following:

Here’s a top-down view showing how I cut dados on both sides of some of the boards:

The boards with dados on both sides were going to sit vertical inside the cubby shelf. Then square shelves would be inserted into the dados to form the cubes.

At this point, I took a look back at my design, and suddenly remembered something that I had forgotten.

Eileen wanted some of the individual cubbies to be long enough to hold standard printer sized sheets (8.5×11) for her large card stock collection.

I had intentionally gotten 10” wide boards for the cubbies to account for this. However, I forgot to factor this requirement into the rest of the design.

The dados were all cut to allow perfectly square cubbies, approximately 8”x9”x9.25”. This would result in the 8.5×11 sheets hanging off the edge slightly.

I didn’t want this to happen, so I needed to make an adjustment to the design. With the dados already cut, I really didn’t want to waste any wood. So I thought really hard and came up with the adjusted design below:

Two of the vertical boards could be cut right where the bottom dado groove was made. Then a longer horizontal shelf could be inserted spanning two cubbies.

This would result in the two end cubbies at the bottom being long enough to hold the 8.5×11 sheets easily.

It also added a nice aesthetic touch to the design, breaking up the repeating squares. Both Eileen and I were very happy about the design modification.

With that little hiccup out of the way, I proceeded to assemble the shelves. I used deck screws, construction adhesive and 90 degree wood clamps. Also, I used a countersinking bit with my drill for the deck screws. I didn’t want to risk the wood splitting.

Here is a picture showing the wood clamps in action:

Construction adhesive was essential to a sturdy design that wouldn’t wobble over time:

Here I have the 4 main vertical boards secured in place:

The cubby shelves are starting to take form here:

I used construction adhesive for all the inside shelves too, I didn’t want them moving in the dado grooves over time. I also used some deck screws where possible too (like on the end pieces).

Here is some more progress made on the cubbies (see how I also had to use some bar clamps to pull the inside shelves tightly into the dados): 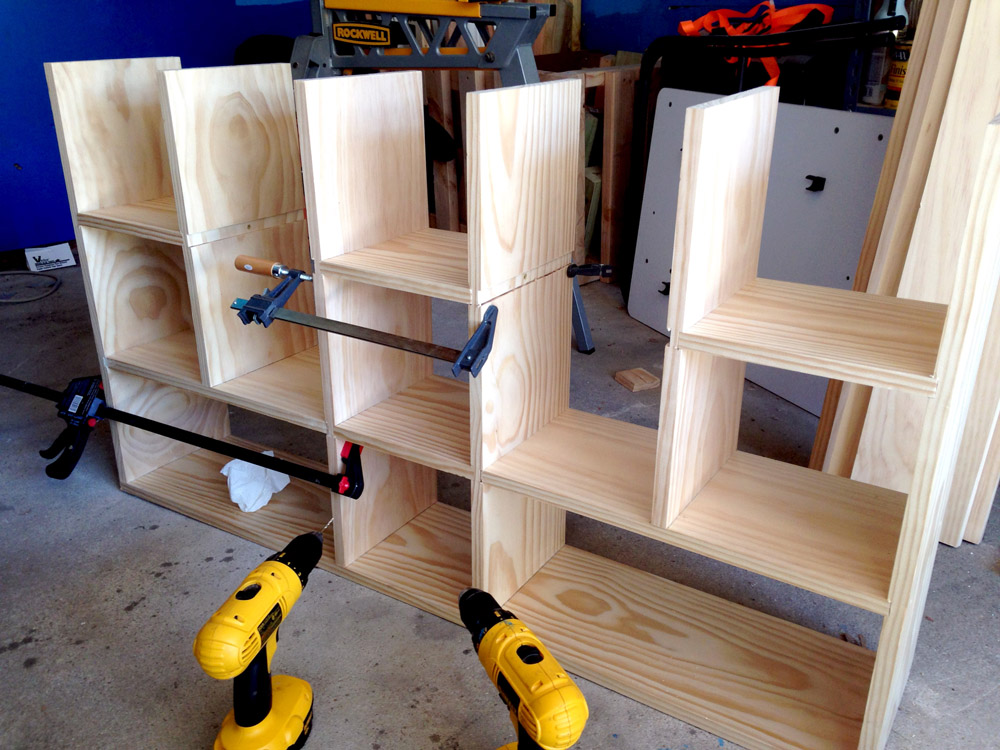 When all the inside shelves were placed into the dados, I saw that the top measurement of the cubby shelf didn’t match the bottom. Little gaps here and there in the dados were adding up and making the top of the cubby wider than the bottom by about an inch.

When I squeezed in one pair of dados with a bar clamp to eliminate a gap, another gap would open up slightly somewhere else. It was getting a little frustrating.

Then inspiration hit me. Maybe I could use some ratchet straps to pull in all the shelves tightly at the same time. It seemed a little silly at the time to use ratchet straps for this project, but I gave it a shot:

Guess what? The ratchet straps worked.

As I tightened each ratchet, I could hear the satisfying creak of the dados squeezing together tightly.

I checked the upper measurement of the shelf and it was finally in agreement with the bottom.

I secured the final top board and attached some strategically placed boards in the rear to help mount the cubbies to wall studs. The cubby build was pretty much complete.

Here is the cubby shelf so far. It looked so nice – and Eileen loved it. It was the perfect answer to her craft room organization and storage problem.

All that remained now was to wood putty the screw holes and paint.

Since I didn’t want items sticking to regular paint over time, the enamel based paint would eliminate this concern. 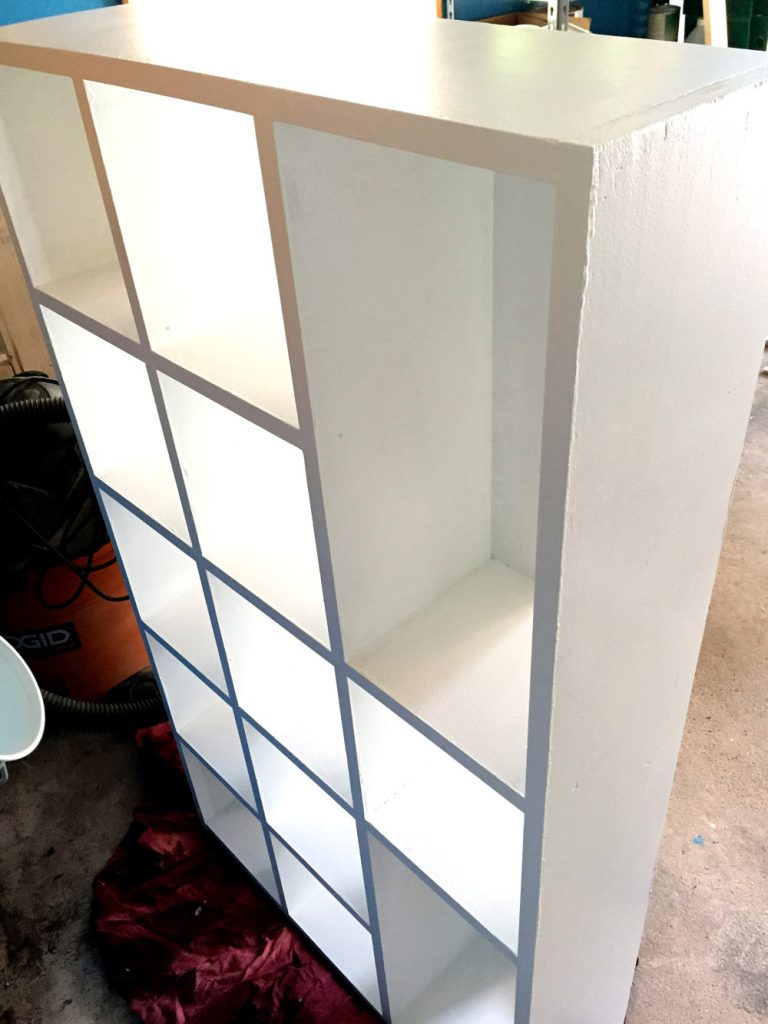 With the pegboard already mounted to the wall. I next needed to hang the cubby storage.

Unfortunately, the size and weight of the cubbies was too much for me to just hold it against the wall while I attached it. Eileen was pregnant at the time, so she couldn’t help me out.

So I got creative and I attached a temporary 2×4 to the wall studs for me to rest the cubby on. This would allow me to position it perfectly without breaking my back. It would result in some small screw holes in the drywall after removal, but I could easily patch that up with drywall compound.

Here’s a picture with the temporary brace in place (I made sure it was perfectly level):

Here is the cubby storage shelf mounted to the wall:

Here is the completed shelf – including Eileen’s organization.

She does a ton of kids crafts with our son, including lots of card-making and letter-writing. With this cubby organization, she can easily access his collection of stickers which are grouped in a bin as well as card stock and envelopes.

Here are some final pictures of the craft room organization. The project was comprised of three parts: the pegboard, the cubby shelf, and the simple wall shelves.

With the amount of new storage created with these three things, Eileen was able to empty out tons of storage containers. She emptied three storage towers, one cart, and one dresser. She completed underestimated the amount of space all of the new craft room storage gave her.

Here’s the impressive ensemble of containers she emptied with this project:

I was sure happy to see that black dresser emptied out. I tossed it to the curb that very day. It had been in closets for the past eight years and before that was my old college furniture.

Don’t forget to download our free plans for this craft room organization and storage project.