Simply stated, our pantry was an eyesore.

It was a little nook of shelves with old curtains pulled to each side.

We were going to put our house on the market soon, and in looking at the competition, we kept seeing very similar houses with beautiful kitchens.

We looked at our old countertops, painted cabinets, and raggedy pantry….and sighed.

Then, I got an idea – installing double French doors on the pantry.

Who doesn’t love French doors? They add a certain style and class – and it should be an easy, relatively cheap upgrade to a tired kitchen. ​ 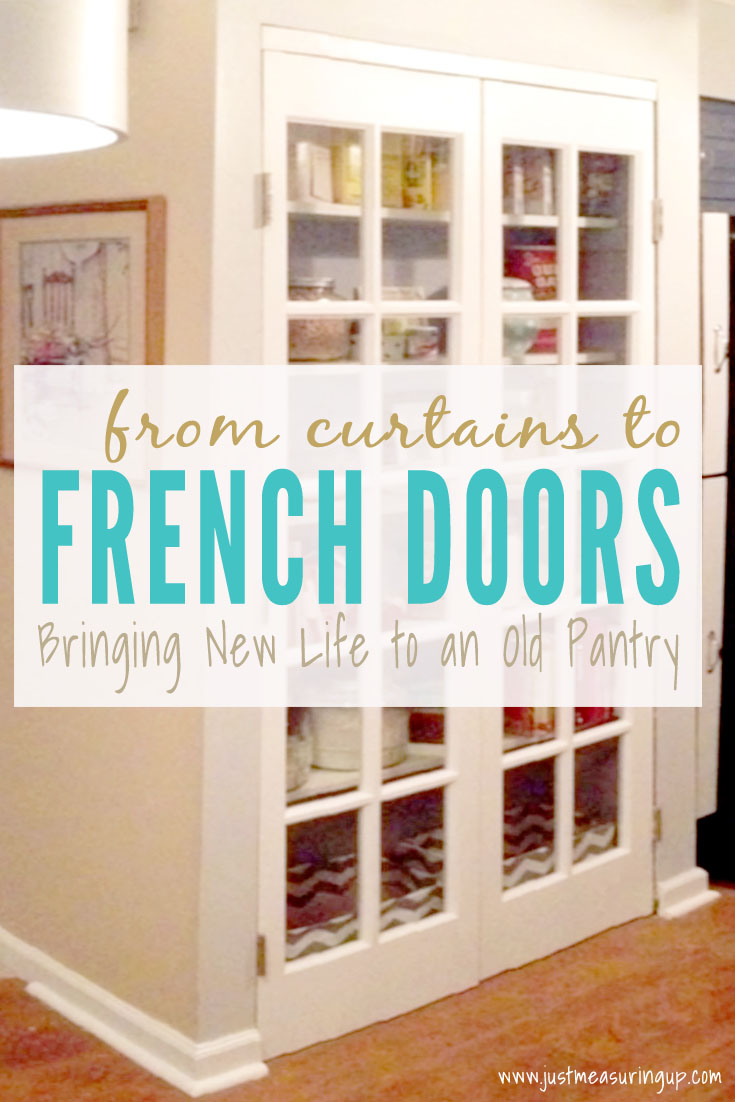 Planning for the French Door Installation

I tend to be very particular when it comes to what I want. Installing any old French doors wasn’t going to cut it.

I searched and searched and finally came across a set of French doors on Overstock. Overstock has some great options when you aren’t finding what you want at the typical stores. (I also found my oddly-sized bathroom mirror there!)

French doors can be expensive but a 10% coupon code, which is pretty easy to find with Overstock, helped with the price.

he doors I found were sold as bi-fold doors, but the conversion to French doors was simple, especially because we had an existing opening. This made for a much easier door installation.

Also, the doors were cheaper to buy unfinished – which wasn’t a problem because I don’t mind painting. Amazon also has a lot of French Doors too if you are looking for more options.

To install the double French doors in an existing opening, Ash removed the six small hinges that connected the door panels together. These hinges were light duty and were meant to be used in a bi-fold setup with little load.

He purchased six heavy duty door hinges, figuring that due to the glass, 3 hinges per door would be needed to handle the weight. (Aside from that, no additional extra hardware was needed.

If we wanted to keep the doors as bi-folds, we would have needed to purchase a bi-fold track to mount in the door frame.)

The actual door came in several different sizes, so we bought the one that most closely fit the pantry opening. It wasn’t perfect because the door height was just a little short.

So Ash filled the gap at the top with a piece of 2 x 4 wood painted white (as you can see in the picture).

He also had to trim the baseboard at the bottom so that he could have a flush edge for the French doors.

To mount the French doors, he installed the hinges on the doors first. Then he took one door panel and placed it in the ‘open’ position in the pantry, with the hinges open 90 degrees. He used some scrap wood (about ¼” thick) to elevate the door off of the floor.

With the door in position, he used heavy duty screws to secure the hinges to the wall. He then removed the scrap wood supports on the floor and verified that the door swung open and closed easily.

​Then, he repeated this procedure with the other door panel. Installing French doors was pretty simple, and although unpainted, the double French doors already looked so much better than before 🙂 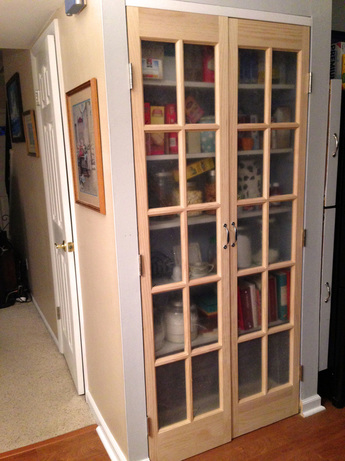 How to Paint French Doors

With the double French doors mounted, the next step was painting. I chose a white semi-gloss paint to match the baseboard and chair rails that I just refreshed.

It went on pretty easily with just one coat needed. There was no need to use any masking tape for the glass panels.

This particular door came with a protective plastic film on each glass panel, so it was easy to paint the double doors without prep work.

Unfortunately, as easy as this made the painting process, removing the film was actually very time-consuming. However, we knew this going into the project because we always thoroughly read the online reviews 🙂

​How to Attach the Door Installation Hardware

After screwing on the door handles, the last step of the door installation was to attach some magnetic catches at the top to keep the doors closed and to also serve as a stop to prevent the doors from swinging inwards. 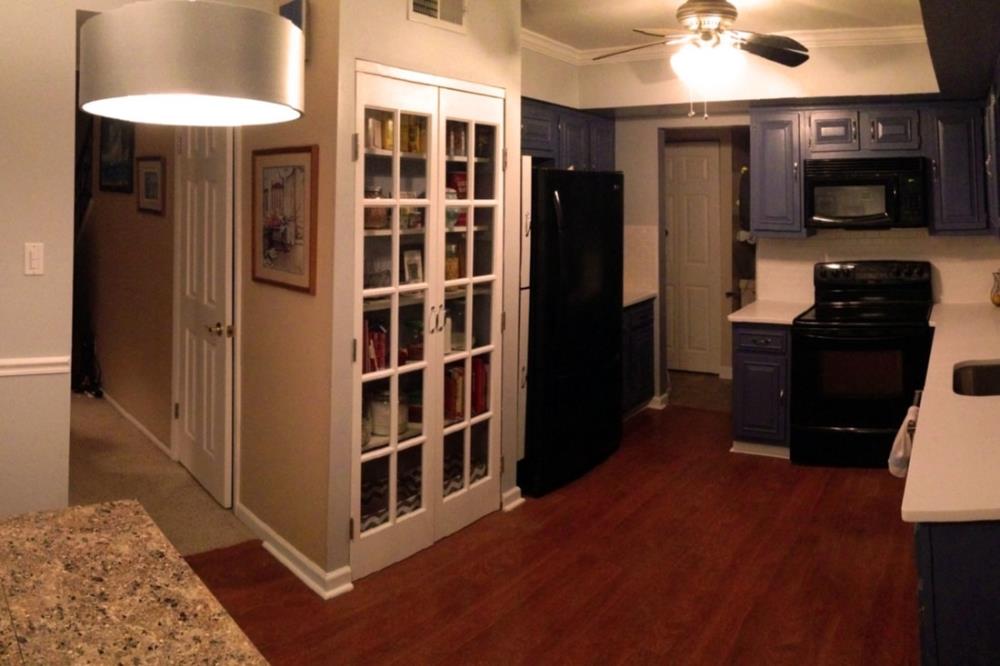 The magnets Ash used were way too strong, as they were making a loud, clanging noise as they connected. Also, when we opened the doors, the panels shuddered from the magnetic tension release, which wasn’t good for the glass.

Ash simply replaced them with less powerful magnets that were just as effective.

As you can see, this weekend project of installing French doors turned out great.

Here’s another look at the before and after of installing the double French doors. It really updated our kitchen without touching the countertops or cabinets. 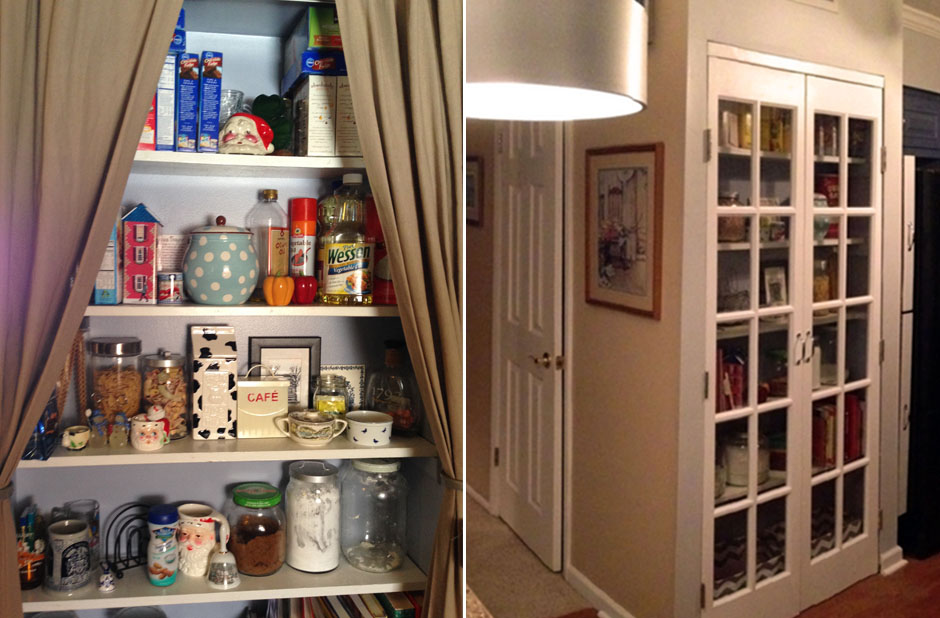 Now that we are in a new house, I miss those interior French doors; however, I have a plan to work them into our new house too!

​Maybe in my office – they would go with our new built-in bookshelf with a window seat. I’m sure Ash won’t mind installing French doors again. Stay tuned 🙂