Crafts > Kids Activities > Making a Crafty Mr. Potato Head for St. Patrick’s Day
This post may contain affiliate links to products we personally use and love.

My little guy loves craft time with his mama.

But, I might love it just a little more.

I love watching his creativity, his little mind at work, as he comes up with new ways of doing things.

We have a sweet little set-up in my office, where he has a craft table beside my desk. On his table, he has a bin of art supplies that he’s allowed to use whenever (crayons, markers, and paper).

He also has a drawer in my desk with supplies that he can use with permission (glue, scissors, etc). 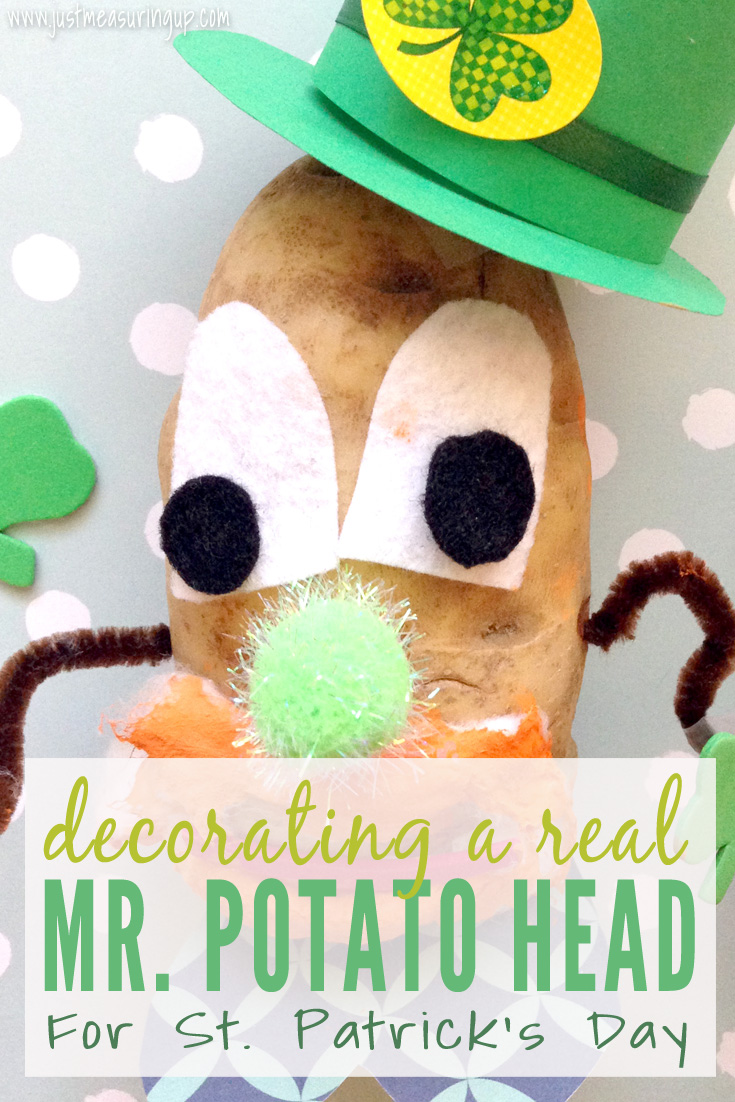 So, when my sister suggested making a real Mr. Potato Head craft as a St. Patrick’s Day activity, I knew he would love it!

This was a no cost project – other than two potatoes, which we usually have. The night before, my son and I collected things from around the craft room to use, so we would be all ready to go after breakfast the following day.

We found felt, foam, pipe cleaners, pom-poms, stickers, shamrocks, card stock, cotton balls, ribbon, and glue. However, you can really use whatever you find or have.

My son loved collecting all of things for our Mr. Potato Head craft. His special job was to put everything I handed him in the bin. ​He loves his special jobs 🙂

He loved putting everything together the day before because it gave him something to look forward to.

​He loves getting into all of my craft supplies, so his eyes were lighting up at all of the fun things he was going to get to use.

Pictured below is the set-up. Whenever we have a messy project or a food project, I lay down a plastic table cloth, which makes for easy cleanup with a toddler. 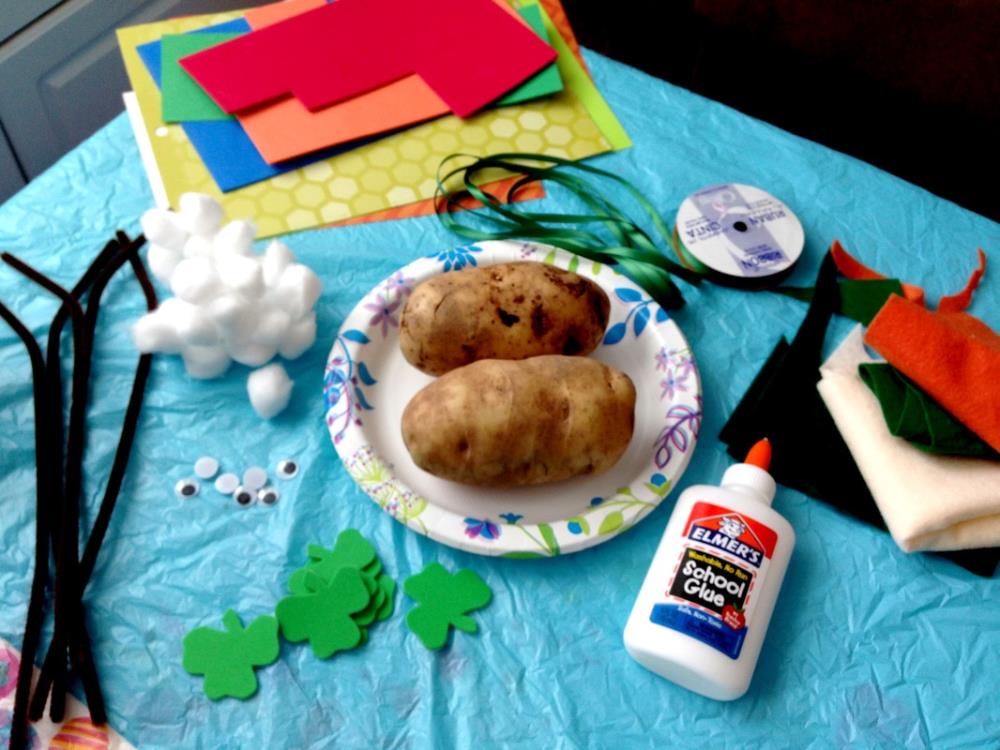 Then, we just had fun and got creative. My son told us what we needed – “Mommy, first we need eyes.” And, then I asked him what he thought we should use.

We used the pipe cleaners for arms (the wire stuck right into the potato), cotton balls for the beard, pom-pom for the nose, felt for the eyes and mouth, and card stock for the shoes.
We put everything on with either Elmer’s Glue or Scotch tape. The felt on felt didn’t work too well with the glue – but everything else held up. 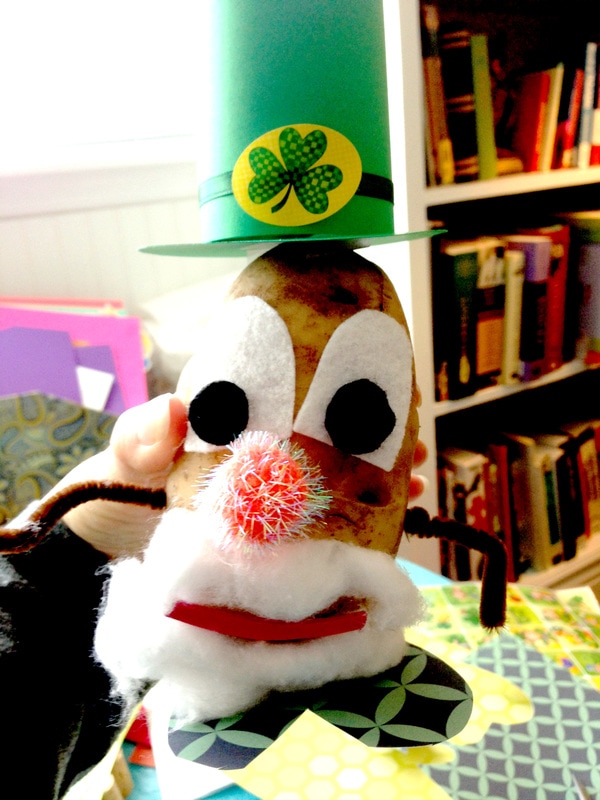 For the St. Patrick’s Day hat, I simply used card stock. I cut a circle for the best, and then I rolled another piece into a cylinder. I centered the cylinder on the base and taped it on top.
We tied a ribbon around the hat – and placed an Irish sticker where the buckle would go, which made a nice touch 🙂 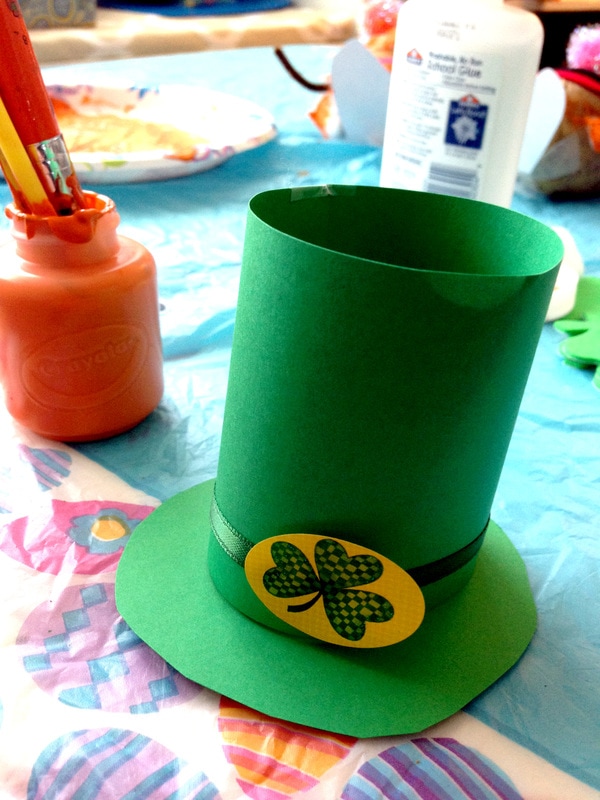 After we finished with the Mr. Potato Head craft, my little guy said, “Time for the other potato, mommy…” Just when I thought we were done 🙂
So, we made a Mrs. Potato Head. We used all of the same things, and added a felt and pom-pom bow in her hair.
Just when we were about done *again,* my son says, “Mommy, what about baby potato?”
And, I wished I had thought to get a smaller potato because that would have been cute to have a whole Mr. Potato Head family made from potatoes.
​After the potatoes dried, my little guy loved playing with them.
​He named Mrs. Potato Head “Nana,” which I don’t think my mom found complimentary 😉

I did have trouble getting the potatoes to stand up straight. I had wished I cut off the bottom to make a flat surface, but I’m sure this would have shortened their shelf life.
[As a side note, I recently learned that when you leave potatoes out and exposed to light, they absorb radiation in the air (shout out to Anthony William’s amazing book “Life-Changing Foods.”) ​So not only will Mr. and Mrs. Potato Head be decorating our kitchen for the next 5 or so days, but they will be absorbing some of the toxins we are exposed to.]
Always a teacher, I also use our crafts as a segway to reading. During our library trip this week, we’ll be reading about St. Patrick’s Day and leprechauns, and the Mr. Potato Head craft served as pre-learning activity.

Overall, our Mr. Real Potato Head craft was definitely a success. My son had a ball preparing for the craft, making REAL potato heads, and playing with his new, clumsy figures.
It’s amazing to see the joy he gets from creating something he’s proud of.

Thanks for visiting! We are Ash and Eileen, husband and wife DIY bloggers. We love working on projects in and around our home. We hope our stories inspire you to check a few things off your project list! 🙂
END_OF_DOCUMENT_TOKEN_TO_BE_REPLACED
We use cookies to ensure that we give you the best experience on our website. If you continue to use this site we will assume that you are happy with it.OkRead more