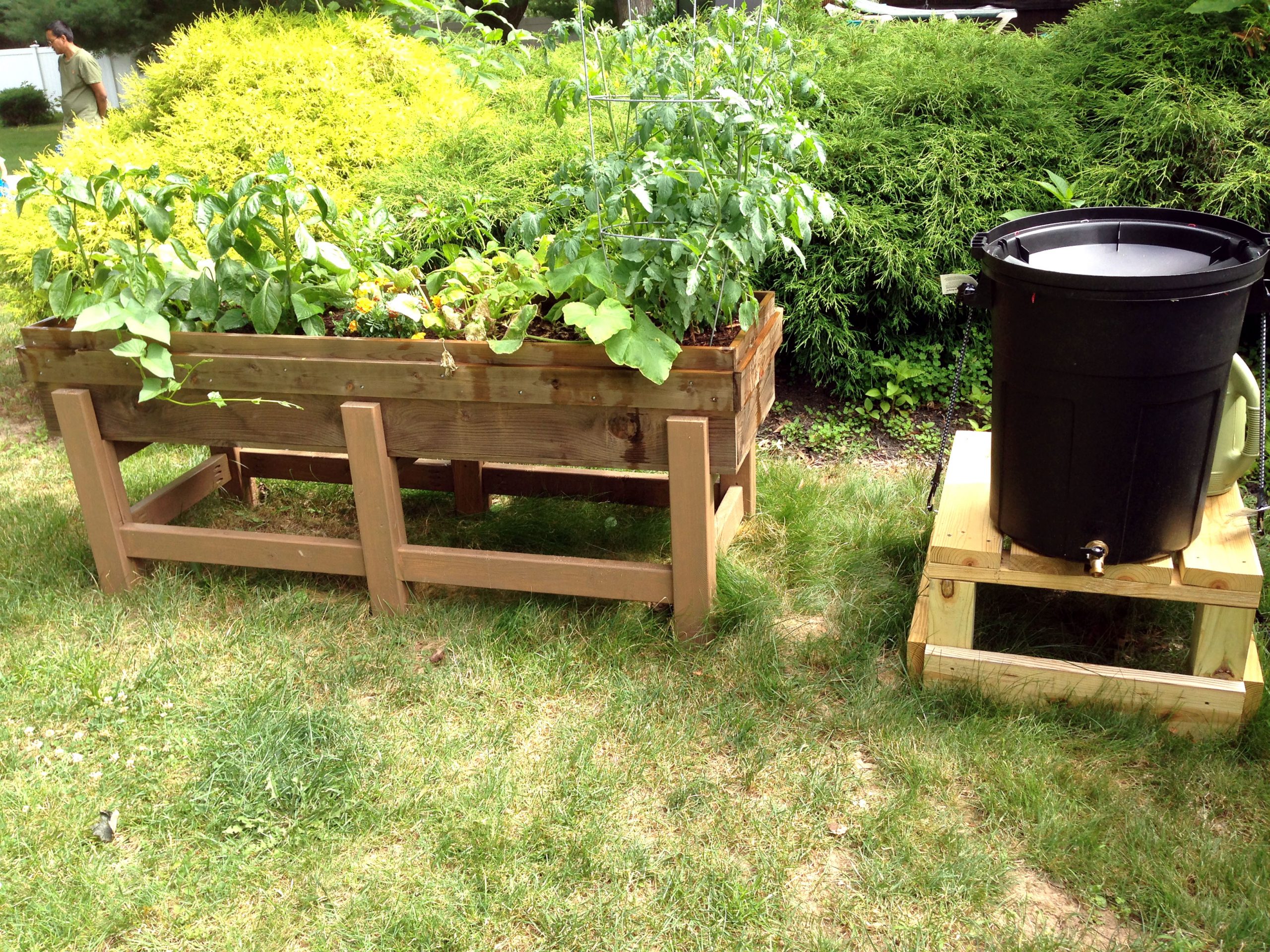 Tired of spending so much money for organic produce, Eileen and I decided to finally start our own garden.

Most of our backyard was filled with shade, so an elevated planter box would be ideal for positioning the garden in the most heavily sunlit area. We also wanted to use healthy, organic soil, so that was another advantage of using a DIY planter table.

Finally, we thought the raised planter box would help deter some of the wildlife from harvesting our crops. We had been plagued with groundhogs constantly eating up our sunflowers. We also have loads of deer as well as foxes running through the neighborhood – as well as a dog that jumps through the yard like a year.

Thus, we wanted a garden that none of these creatures could access.

So, a tall planter box sounded ideal for our first garden. 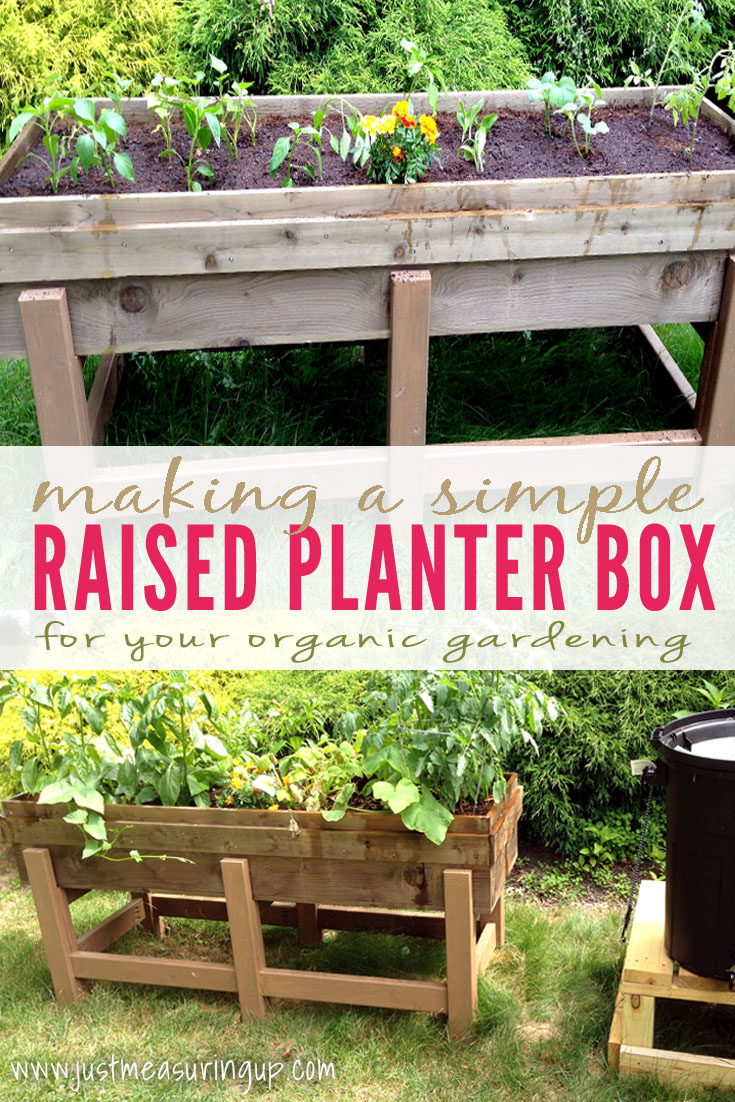 I searched the internet for planter table design ideas since I hadn’t made a garden planter box before. I found a simple but sturdy design on Instructables. This particular design called for building both the DIY planter box and the stand, which made for a garden table.The planter box itself was 6 ft. x 2 ft, stood about waist height, and was made of cedar wood. The planter stand was made of regular 2 x 4s, but stained to protect from the elements. This would be perfect for us.

Except for the cedar wood, I had all the other materials required for building a planter table. Cedar wood was recommended because it is naturally very resistant to rotting.

I purchased several planks of it from Home Depot and quickly got to work in the garage building the elevated planter box.

How to Build a Raised Planter Box

Following the garden planter box plans I found online, I constructed the cedar box. The planks went together with lots of pocket holes using my Kreg Pocket hole Jig.

I recently discovered the world of pocket hole joinery, so this part of the DIY planter table was a lot of fun, and gave me a lot of valuable experience.

Here’s the garden planter box starting to come together: 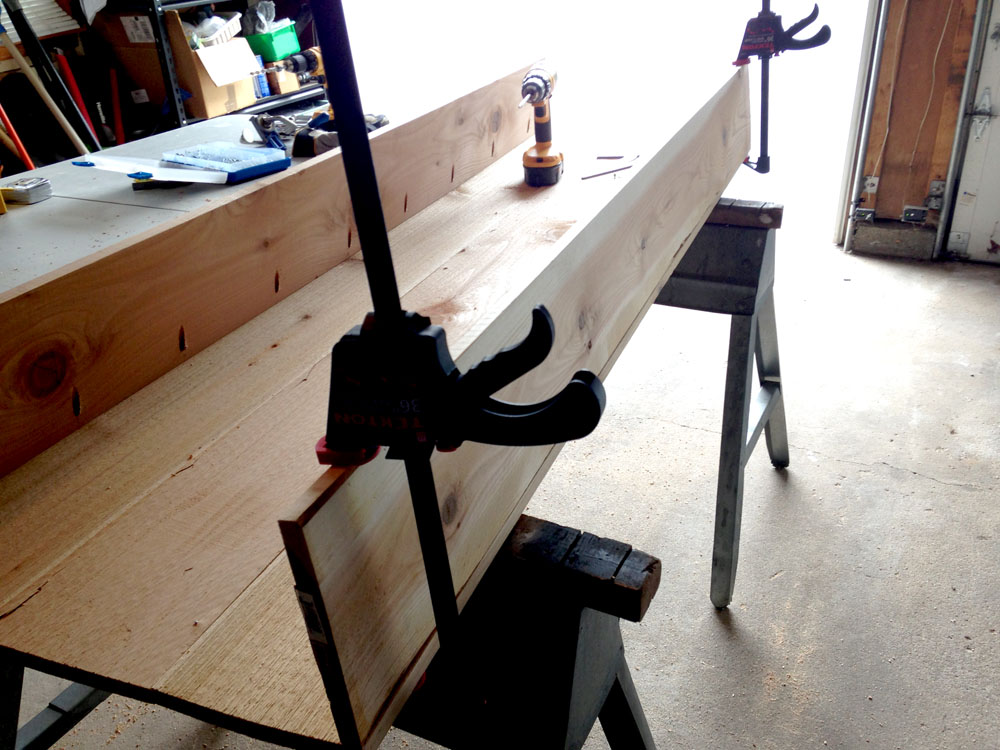 You can see all the pocket holes used to join the side planks to the base of the planter box.

I joined the base with pocket holes. They are underneath so you can’t see them in the picture.

Wood clamps were a necessity for building a DIY planter box to keep the planks aligned while I fastened them.

Also, the cedar planks from Home Depot were very cheap and warped. I used clamps to straighten them (until the box shape was formed).

Here’s a picture showing one of the end corners of the garden planter box: 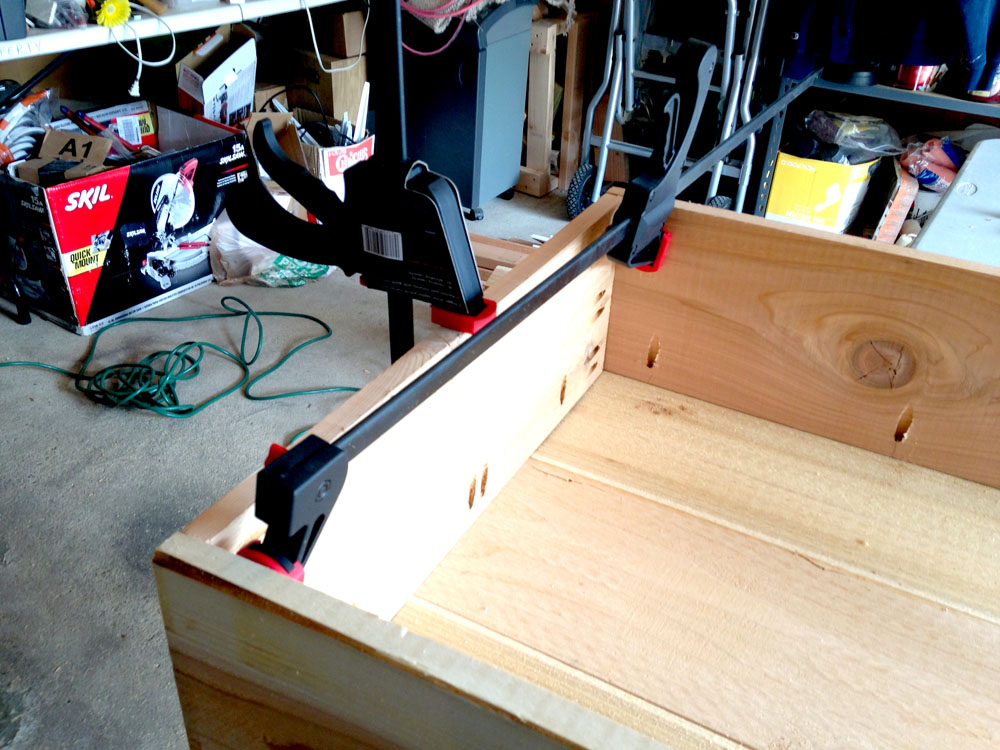 Note, all of the pocket holes were used.

​I am also using my clamp here as a spreader to force the long end pieces apart.  The cheap cedar wood so warped that I could not get the side plank in by hand. I needed the spreader for assistance.

The pocket holes made the DIY planter box very sturdy. Also, despite all the warped cedar planks I used, the box came out very straight.

The warping was only frustrating during construction. Yet, my clamps and spreaders overcame that hurdle.

The cedar planks sold at Home Depot were not wide enough to create the ideal box depth. So, I had to extend the height of the garden planter box by a little.

It was a bit too shallow for adequate growth of roots. So using more pocket holes, I made another layer and attached it to the top of the box.

Here’s a picture of how I fastened the second layer of the raised planter box. I’m using a face clamp to keep the surfaces flush as I inserted each pocket hole screw: 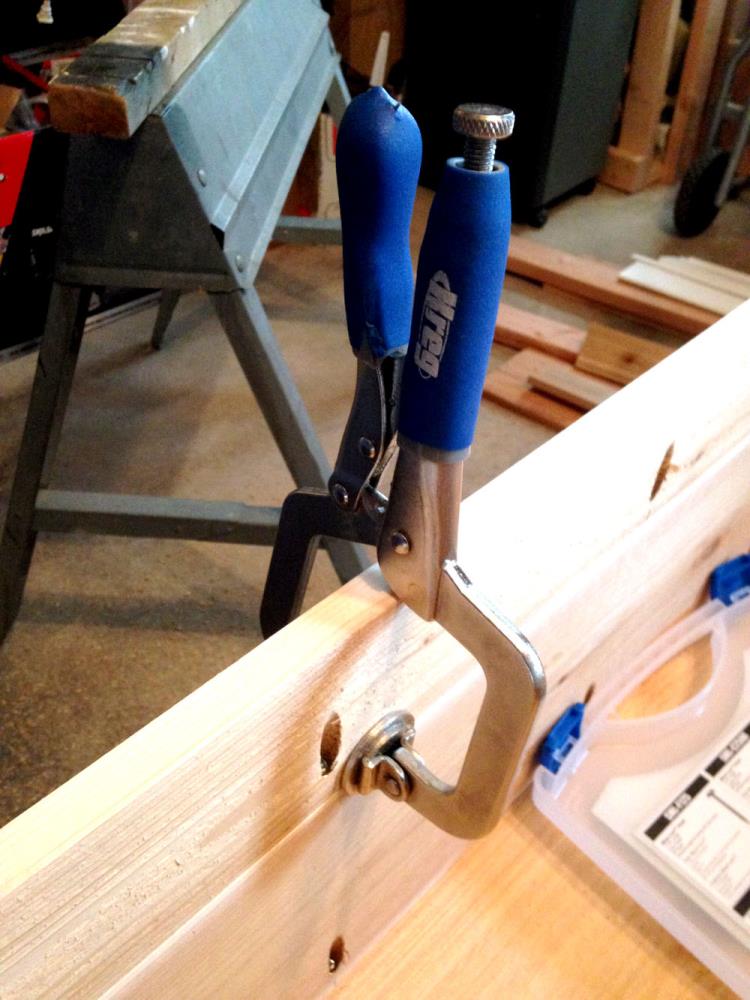 How to Build the Planter Box Stand

Next up was the stand for the DIY planter box. Construction went along very easily as I followed the instructions.

The stand consisted of a cross shaped base to rest the planter box on, and 6 legs made of 2 x 4s (doubled up to provide the strength needed to hold the garden planter box when full of dirt).

I took the below picture while I was building the stand or table for the elevated planter box: 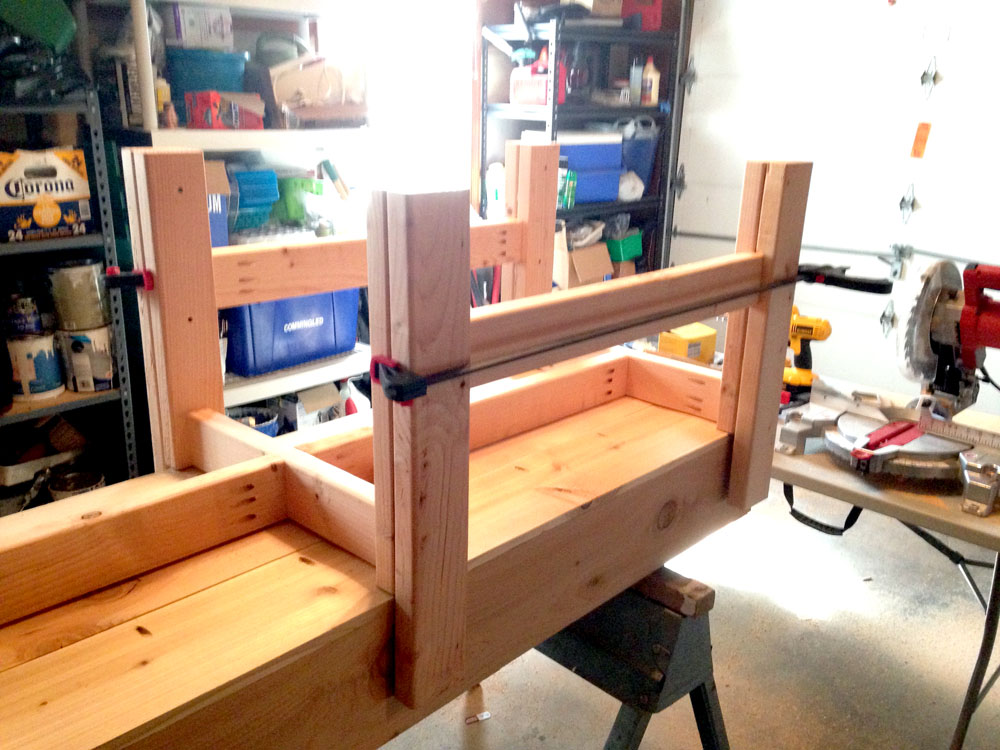 After the DIY planter stand was finished, I placed some square cedar cuts on the bottom of the legs. These served as feet for the stand up planter table.

They would help to keep the 2 x 4s off the wet ground, and to help prevent it from sinking.

Finally, I applied some stain to the whole planter table to help it’s longevity outdoors. The planter stand required a stain because I used regular 2 x 4s.

I opted not to use pressure treated wood because I didn’t want those chemicals so close to the plants. I used regular deck stain for the planter stand.

Technically, the cedar didn’t need a stain (because of its increased rot resisting abilities) but I chose to stain it anyway to get the most life out of the wood and enhance the durability of the planter stand.

It was important to use a non-toxic natural stain though.

Since we were going to use the raised planter box to grow organic produce, it was important to not use any chemicals in the garden planter box that could be absorbed by the plants.  I had done my research ahead of time, and ordered one online.

Here’s a picture of the completed DIY planter box: 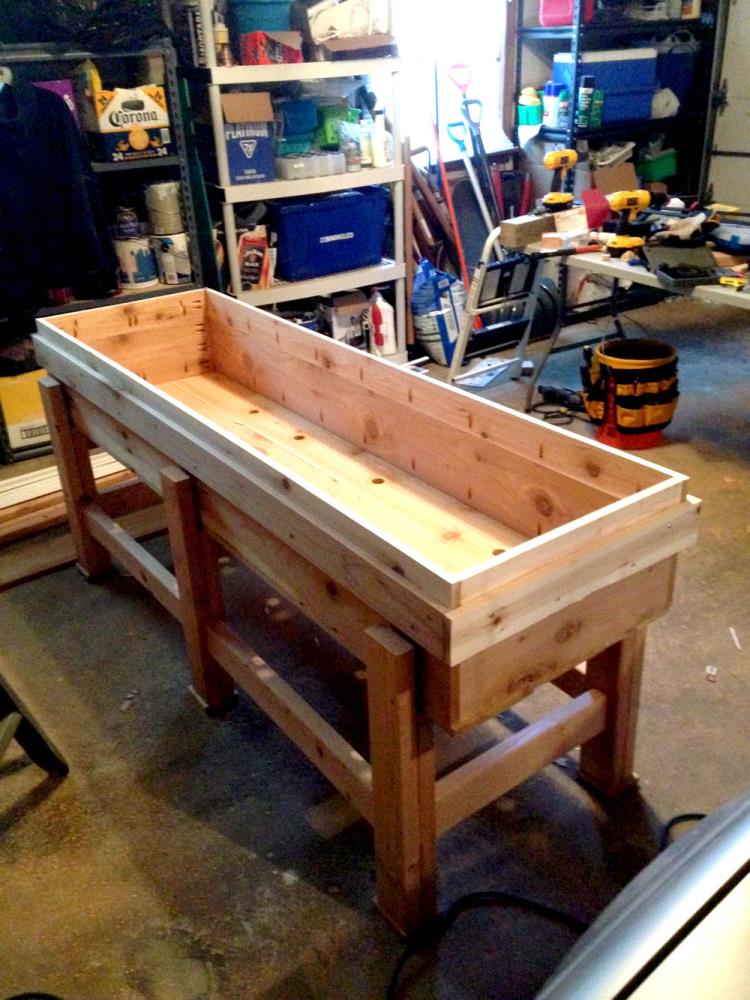 Notice the height extension for the box was reinforced by an outer rim.  This rim also provided some visual flair.

Next I located an ideal spot for the raised planter box outside.

I decided to put the garden planter box of the way from daily backyard use, yet in a place that received the most sunlight for the amount of tree cover we have.

Unfortunately, the ground there wasn’t perfectly flat. So I dug holes in the ground for the raised planter box legs to rest.

I dug the holes at various depths so that the DIY planter box would be level once I inserted it. It was a trial and error process but didn’t take too long.

Here’s a picture showing the box stand, with the legs partially below ground to make the structure level: 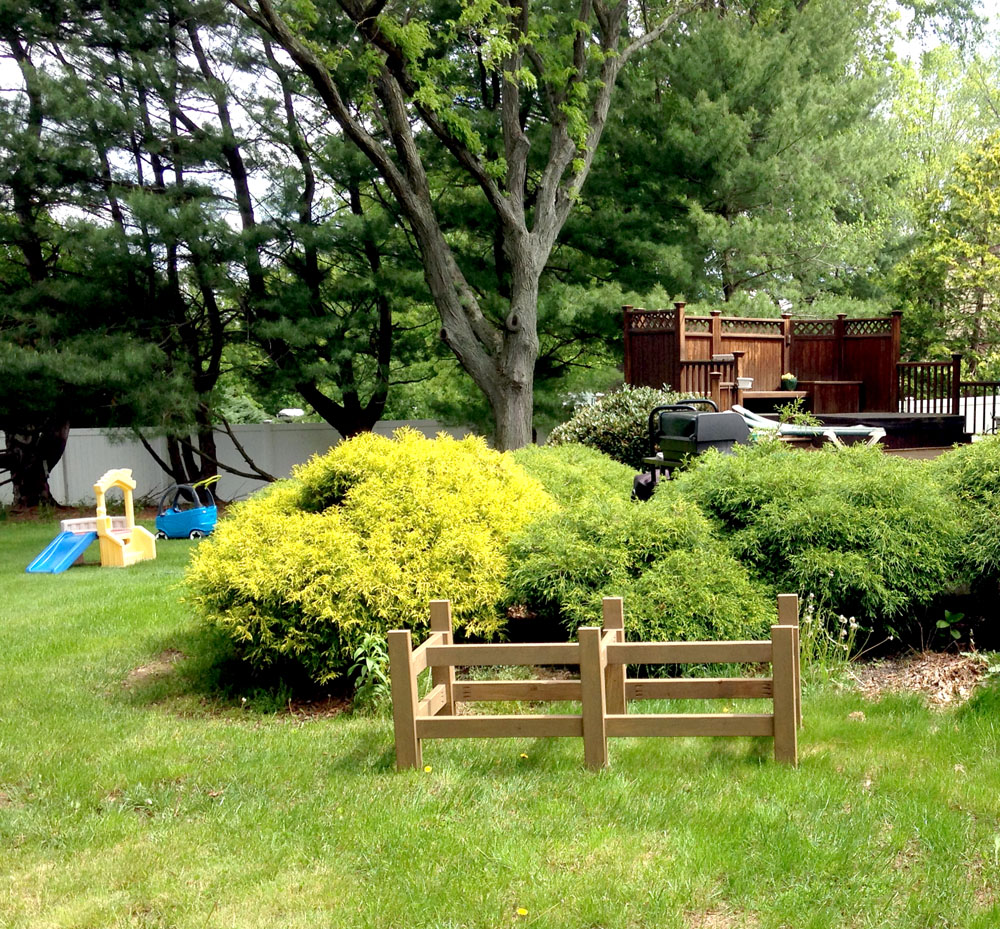 And, here’s a close up of the raised planter box resting in the stand: 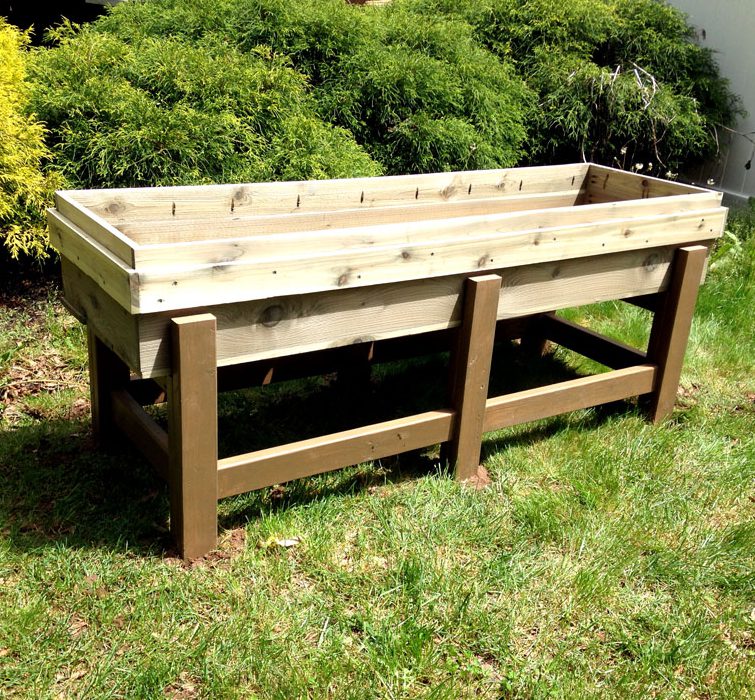 Here’s a picture of the raised planter box after we planted everything. We used mostly pre-grown, organic plants for a better odds since this was our first garden. 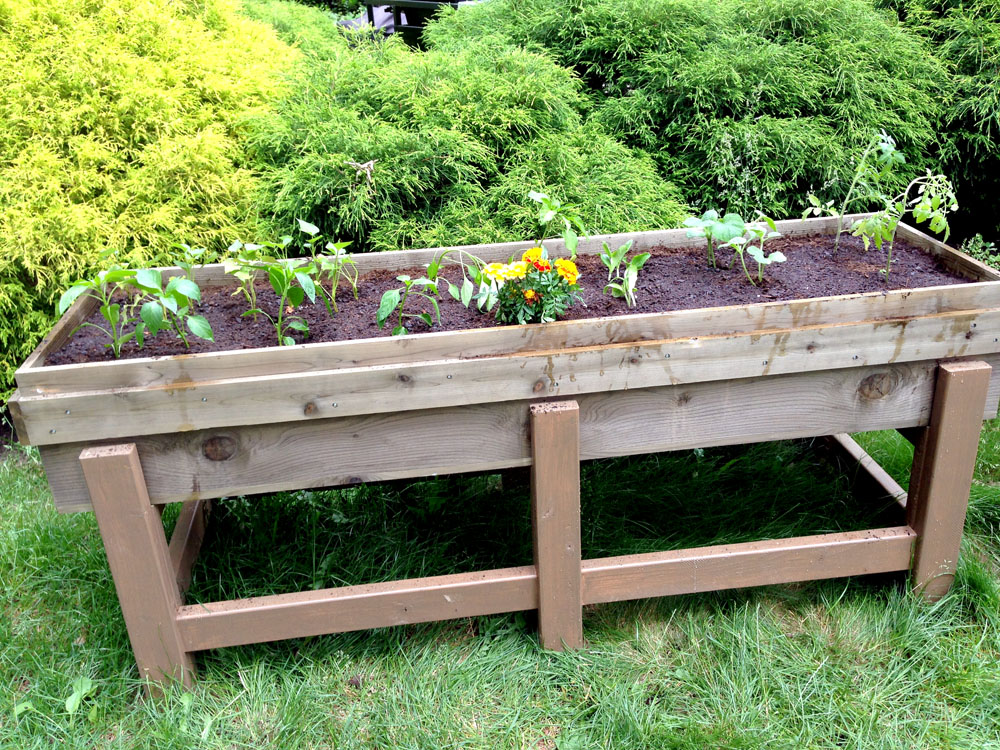 Fast forward a few months later, and our garden was thriving. We were happily surprised with the number of plants that fit in the planter table. 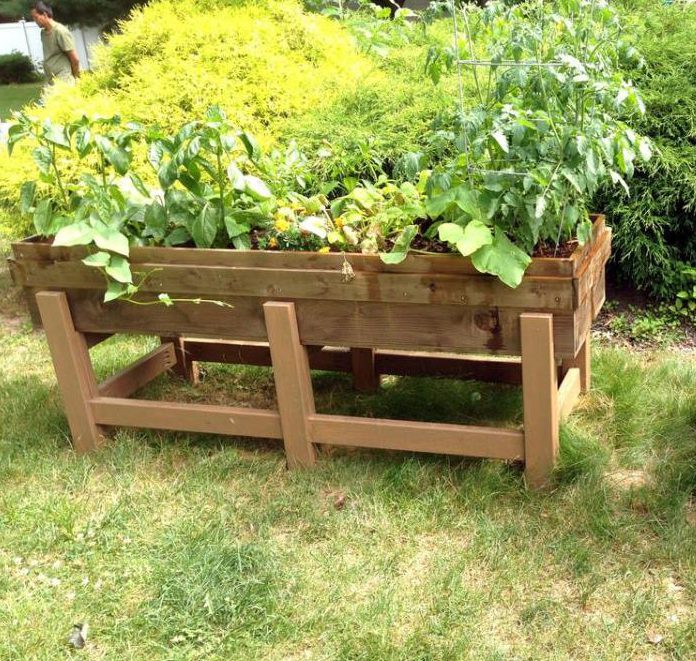 Tired of buying your produce from the grocery store? Trying to save money on decent organic produce? Looking to start living off the grid?

Think about building your own DIY planter box – you can definitely have a rich, plentiful garden with this box, and the raised aspect of it provides many advantages.

Our DIY planter box has stood up strong through all sorts of severe weather, and still looks the same as the day I put it outside. We had no issues with critters of any kind, and we got to use nutrient-rich organic soil. We later went on to create a DIY rain barrel to water our garden – which has helped our green goals.

In total, I spent around $50 for the cedar planks and natural stain for the planter table project.

​The rest of the materials (mostly 2 x 4s, deck stain and pocket hole screws) were lying around my garage from previous projects.

Our garden certainly served us well this year, and we are looking forward to an expansion next year 🙂 This DIY planter box was just the start.