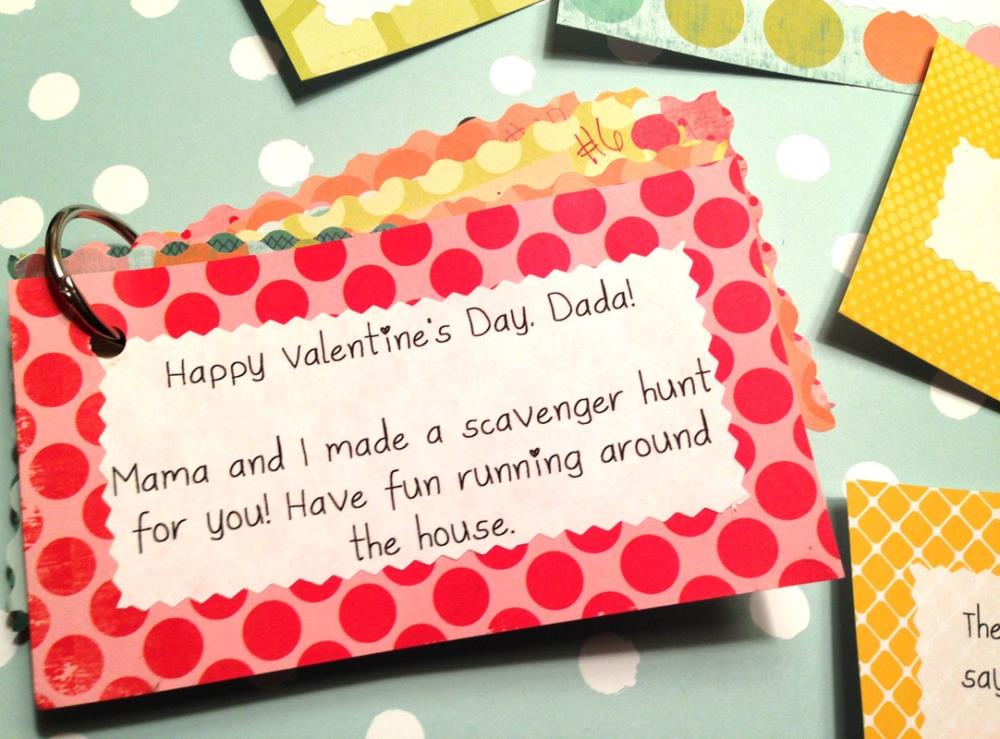 Last Valentine’s Day I threw together a little scavenger hunt for Ash. Every now and then I try to do something sweet 😉

Although too young to actively participate, our son was the star – as all of the clues were written in his point of view and revolved around him too.

​One example was “This is where I like to sit and read…” and the clue was hidden under his Mickey Mouse couch in the playroom where he would pretend read.

Another clue was “I haven’t learned to walk yet, but I love to run” and the clue was in his exersaucer – the little thing where toddlers “run” in circles. 🙂

It turned out super cute, and I had a good laugh watching Ash run around the house looking for the clues. And, getting stumped a few more times than I would have thought.

A few weeks ago, I was thinking about Valentines crafts and activities and making the scavenger hunt.
​
So, I dug out the clues and LOVED reading through them – it’s crazy how much kids change so much in one year!

I mean last year our toddler had about a five-word vocabulary and was relying mainly on sign language to tell us “more,” “hungry,” or “sleepy.”

This year, he is speaking in mostly run-on sentences: “No, mommy I don’t like carrots, actually, I would like more rice for lunch for me, please mommy, I really want rice.” :):)

Reading through all of the clues definitely took Ash and I back. So much – that I decided a Valentine’s Scavenger Hunt would be a recurring thing in this household.

This year, our toddler can help make it – or help Ash find all the clues. Or both 🙂

Materials For The Making A Scavenger Hunt

First, I typed up the clues on the computer, using a cute font with hearts. You can also handwrite them – or have your kids write them.

Then, I printed them out and cut them up using squiggly scissors. I love these scissors because they disguise my lack of being able to cut in straight lines. Next, I glued them to card stock.

So, I labeled the back of each card with the place where that card was hidden – NOT with the answer to that question. This made the clues easy to hide.

And, the answers were still labeled (for later re-reading), they were just on the back of the next card.

The last clue can be hidden with a prize. Our last clue led Ash to the mini-fridge in his office (my old dorm room fridge is still humming!), where there was a sweet treat for him 🙂

After Ash collected all the clues, I bound them all together using a hole punch in the top left corner of each card, and then a loose-leaf binder ring to keep them together.

This was so much easier and more organized than a rubber band or paper clip because you can flip right through them.

I also use these binder rings to bind together the Christmas cards we received each year 🙂 Love them!

I’m looking forward to seeing this year’s hunt. Our little guy might give Ash a run for his money 🙂

​And, I’m sure next year I’ll flip through this year’s clues saying I can’t believe how much our little guy has grown… again 🙂