Crafts > Parties > How to Throw a Seinfeld Theme Party (Even in a Restaurant)
This post may contain affiliate links to products we personally use and love.

Themes make parties so much more fun. They break the ice, give everyone a few laughs, and they are filled with creative, little details which I just adore.

With Pinterest and Google’s image search, throwing a theme party is easier than ever because there are huge archives of what has already been done.

It’s like having a silent yet awesome brainstorm session with just you and the Internet.

With my sister Bridget turning 30, my family and I wanted to throw her a surprise party.

​However, she is extremely hard to trick, lives in a different state, and is constantly travelling at the blink of an eye. ​

We were worried that we wouldn’t get her to nail down a date, let alone make sure she was actually home for it. Yet, with a little decoy plan, it all worked out.

She thought we were going to see Aladdin on Broadway. Once you purchase Broadway tickets, you are glued to that date, so it was a great cover.

The next challenge was throwing the party in a restaurant. 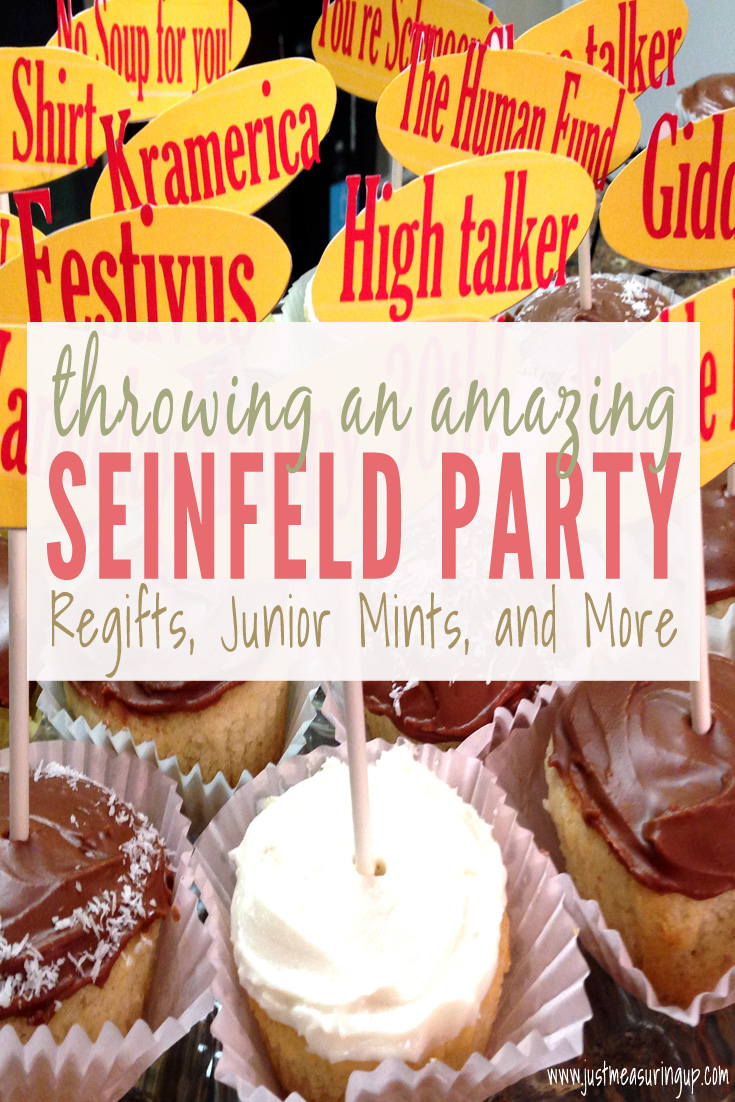 Being the DIYers that we are, we love party planning and are used to hosting parties at our home –cooking themed food, decorating every corner of the house, and planning fun activities, like photo booths.

However, since we lived out of town, we wanted to go to her, making a restaurant our primary option. To keep costs down, we didn’t rent a private room but rather had the party in a nice pizza place.

At first, I thought we wouldn’t be able to have a theme party because you can’t decorate a few tables in a restaurant.

​Yet, I found a few creative ways to work in the theme. We made Seinfeld desserts, organized Seinfeld-inspired regifts, and made a photo book of Seinfeld quotes paired with pictures of my sister.  ​ 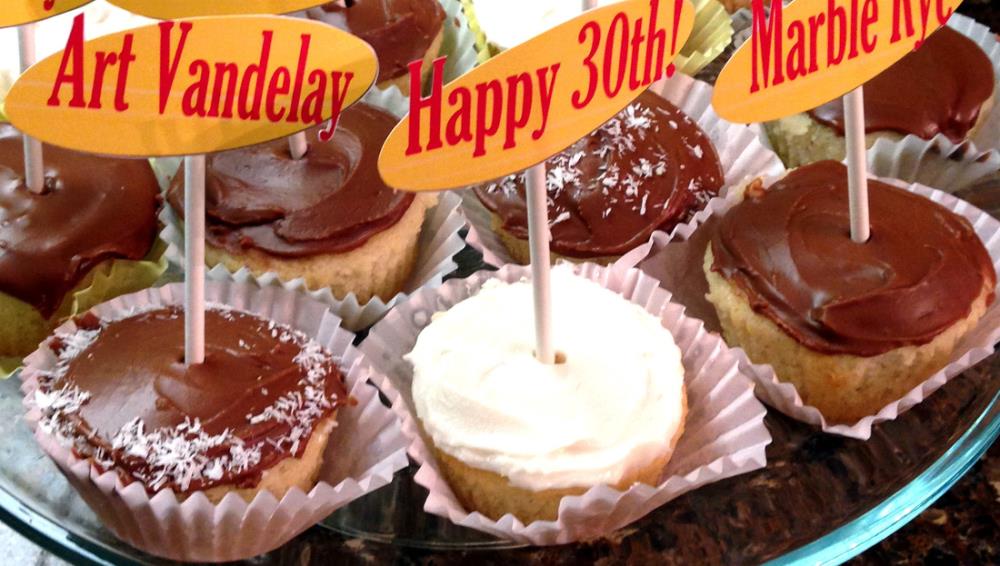 My sister loves Seinfeld – I mean, everything is a Seinfeld reference.

She commonly makes jokes about New York’s awful postal service, brings us chocolate babka when she visits, and is always complaining about close talkers.

Not to mention, when I was graduating college, in the love notes section of my yearbook (where you are supposed to say how proud you are of the graduate), she submitted a note filled with Seinfeld-isms.

Check out this yearbook “love note” from my Seinfeld-loving sister:

Funny, right?! There are so many amazing lines from Seinfeld that you can do so much with.

Therefore, it was the perfect theme for this restaurant party.

​Here’s how I worked the Seinfeld theme into the restaurant setting:

Themed food is my favorite part of parties, and unfortunately, we weren’t able to be as creative with this due to throwing the party at a restaurant.

We had NY pizza and big salads. I also made cupcakes for dessert (easy for the restaurant to serve) with Seinfeld cupcake toppers.

To make the cupcake toppers, I used some short Seinfeld-isms on a yellow oval.

I printed them on white card stock, cut them out, and then taped them to 4-inch lollipop sticks.

​Also, I made gluten-free, dairy-free, egg-free cupcakes (which turned out great!!). 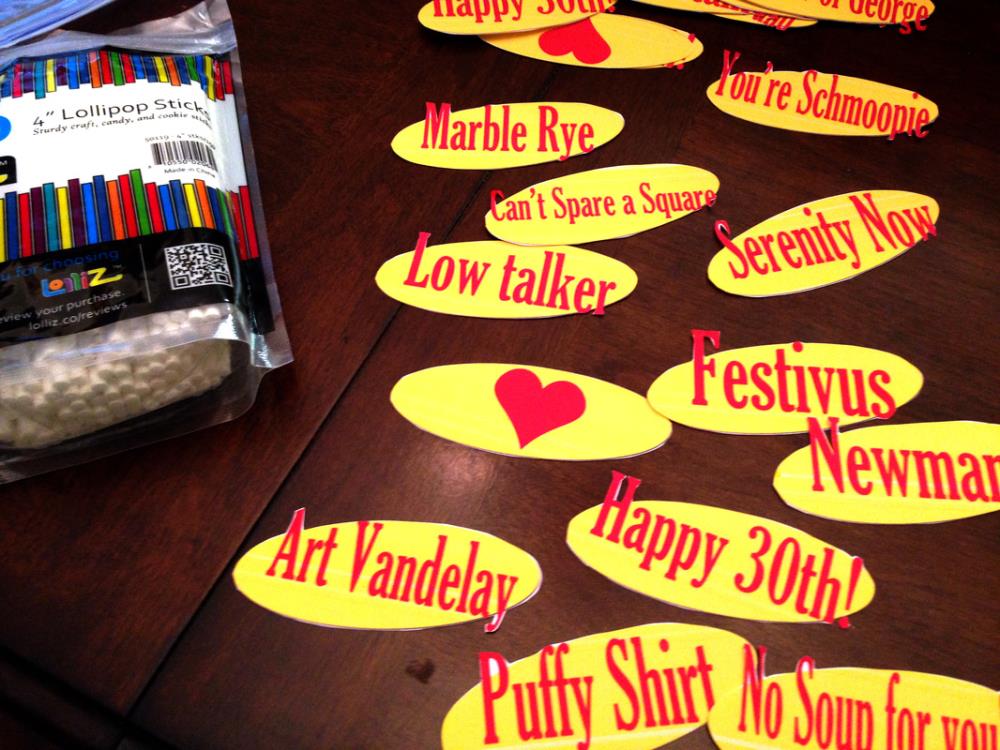 As far as the food goes, Seinfeld has so many amazing food references. If we were throwing the party at our house we would have had all of this to work with:

That would have been some spread!

For another fun detail, I decided to make goody bags, which included some of the many food references from above.

Being that it was just after Halloween, I got some great deals on candy. 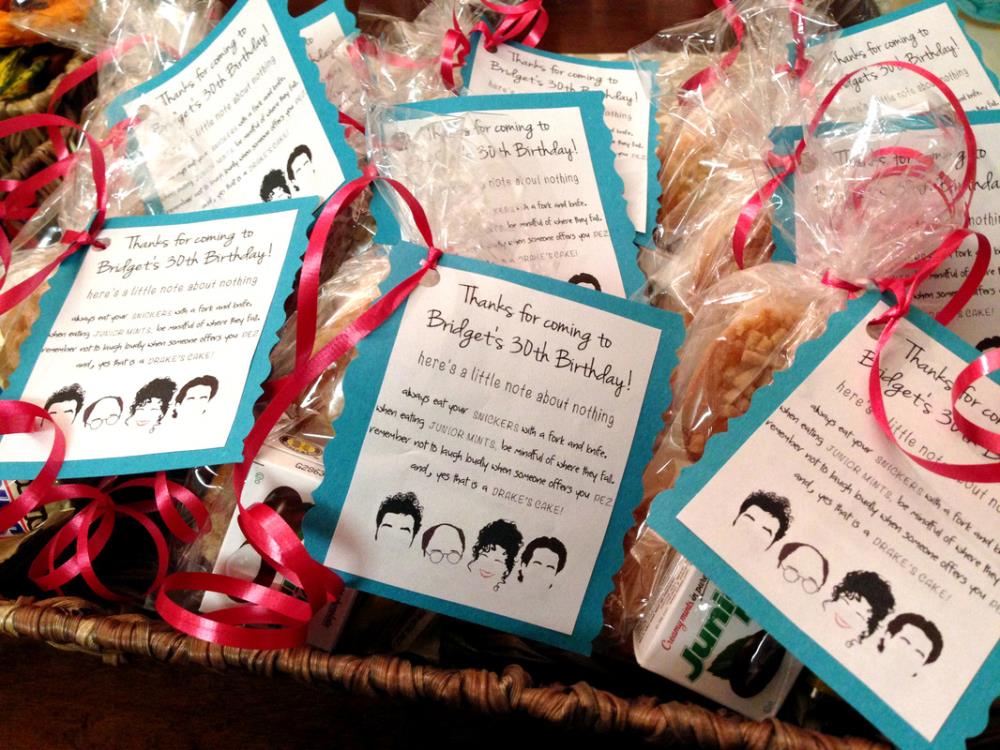 I put the candy in clear bags from AC Moore that were only a couple of bucks.

The goody bags also doubled as decorations as I put these in the middle of the table for guests to take. Everyone loved the Seinfeld goody bags. 🙂

Last, if you are anything like me, I feel like you never know whether to bring gifts or not to birthday parties for adults, and you also don’t want people to go out and spend money unnecessarily.

Soo – what did we do about gifts? Well, Seinfeld presented the perfect opportunity: the regift.

It was hilarious, and Bridget got some really thoughtful gifts too. I highly recommend home shopping/regifting for every occasion now :))

Additionally, the other hit of the party was a gift that my sister, parents, and I made. We took over 70 Seinfeld quotations and paired them with pictures of Bridget from the past 30 years.

As far as the number of quotations/pictures, the plan was 30 because Bridget was turning 30, but with all the great Seinfeld quotes and hilarious pictures through the years, 30 was a drop in the bucket.

​Titled “A Book about Nothing,” it turned out hilarious! The pictures and quotes made for a truly humorous pairing. We also put each Seinfeld-ism in a different font.

​The pictures below are a few of the Seinfeld quotations paired with pictures of my sister: 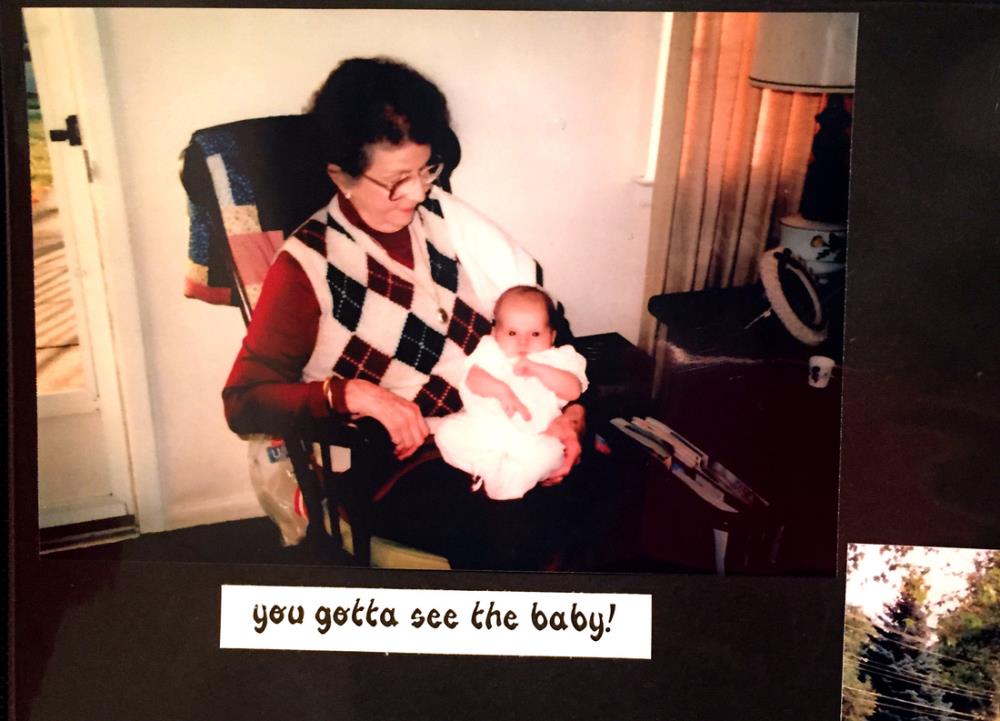 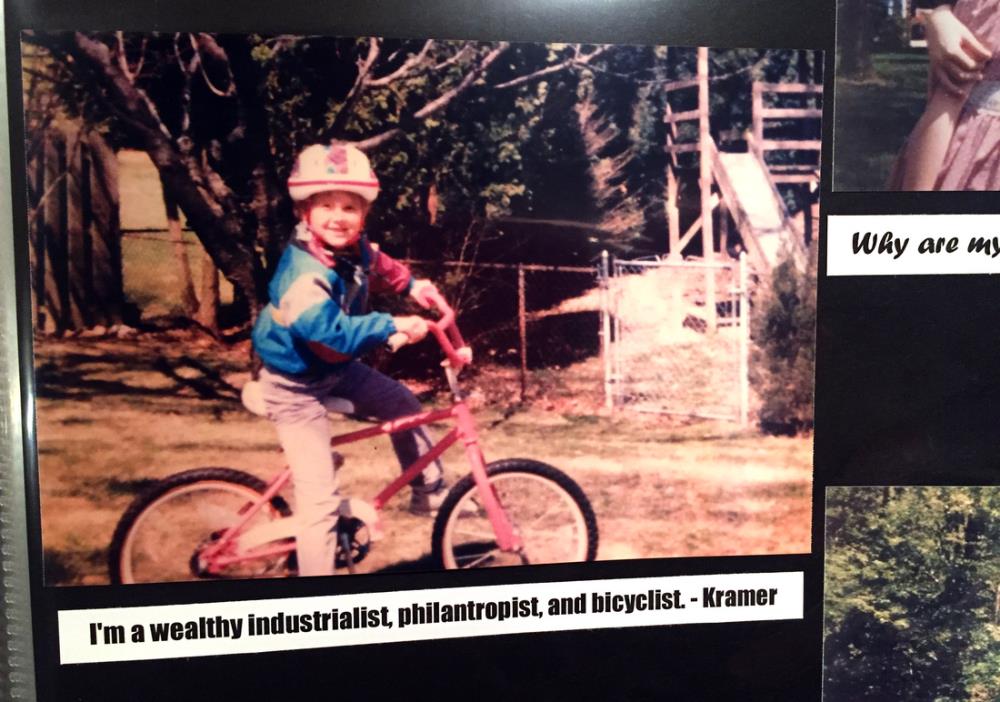 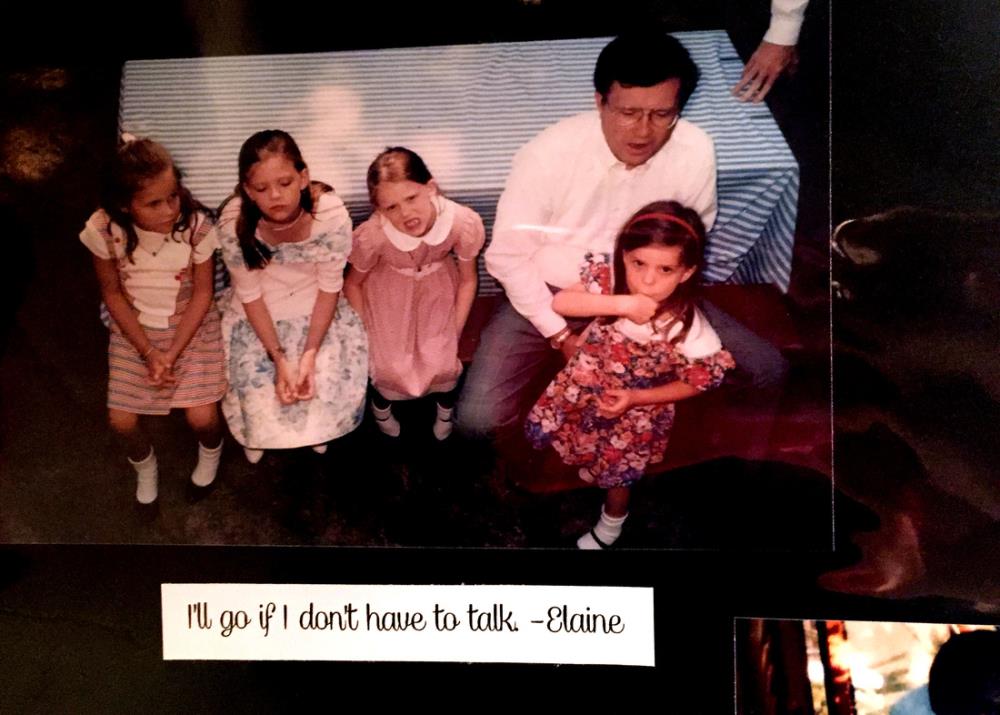 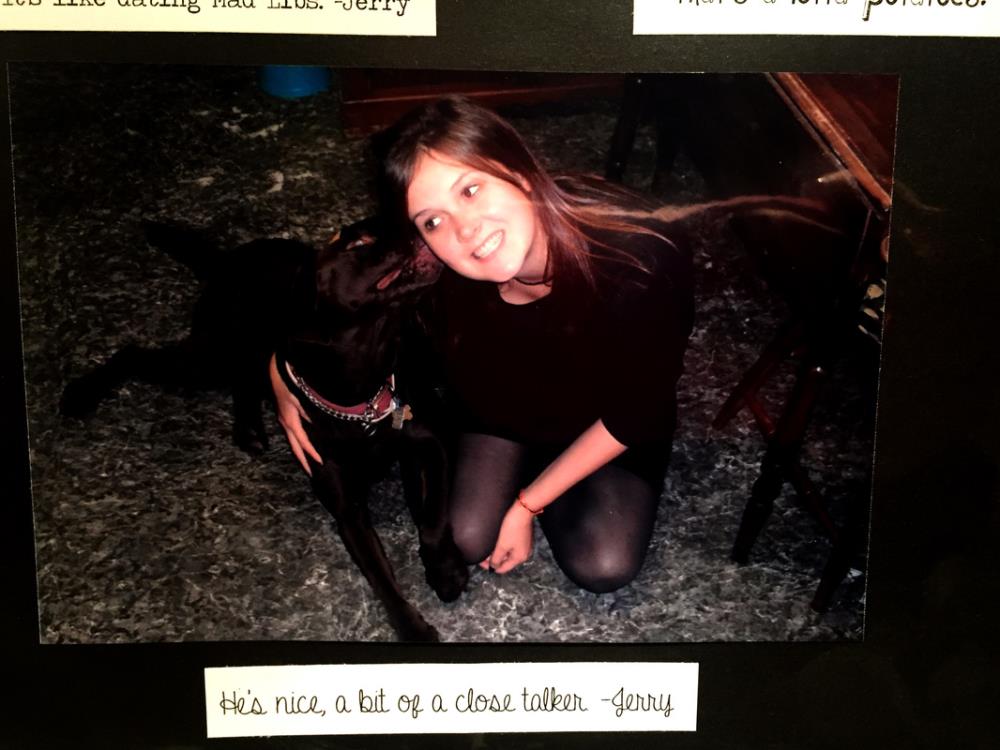 Even though our restaurant Seinfeld-themed party wasn’t as grandiose as our usual parties, it was just perfect with these special details:)

We completely surprised my sister, and of course, she loved the theme! ​The guests enjoyed themselves too!

A few Seinfeld party guests broke into their goody bags during the party, but sadly, I didn’t see anyone eating their snickers with a fork and knife…

​​​​Guess they didn’t read their note about nothing yet 🙂

Now that I’ve pulled off two awesome surprise 30th birthday parties, I told my family I was retiring from surprise parties. They are a little stressful!

Yet, Ash is still talking about how much he loved his, so maybe there will be more to come.

Thanks for visiting! We are Ash and Eileen, husband and wife DIY bloggers. We love working on projects in and around our home. We hope our stories inspire you to check a few things off your project list! 🙂
END_OF_DOCUMENT_TOKEN_TO_BE_REPLACED
We use cookies to ensure that we give you the best experience on our website. If you continue to use this site we will assume that you are happy with it.OkRead more