The Sesame Street desserts were my favorite part of my son’s Sesame-themed party. Based on the rave reviews, I think they were my guests’ favorite part too. I made a huge Elmo cake and then I made homemade Elmo and Cookie Monster cupcakes.

I just loved how the homemade Elmo cake turned out… so much that I was actually sad cutting into it.

The DIY Elmo cake was a 12″ two-layer, gluten-free vanilla cake with chocolate icing. Red sprinkles covered the sides of the cake, along with two Elmo face cut-outs – made from cut-out cookies and chocolate melts.

Our guests were totally impressed with the Sesame Street desserts – and the homemade Elmo and Cookie Monster cakes were so easy to decorate.

After making the homemade Elmo and Cookie Monster cupcake batter, I filled the muffin liners 3/4 of the way full. I wanted to have a nice dome at the top of the cupcake. If the cupcake was too flat, the Sesame Street faces would be harder to make and wouldn’t look as nice.​ 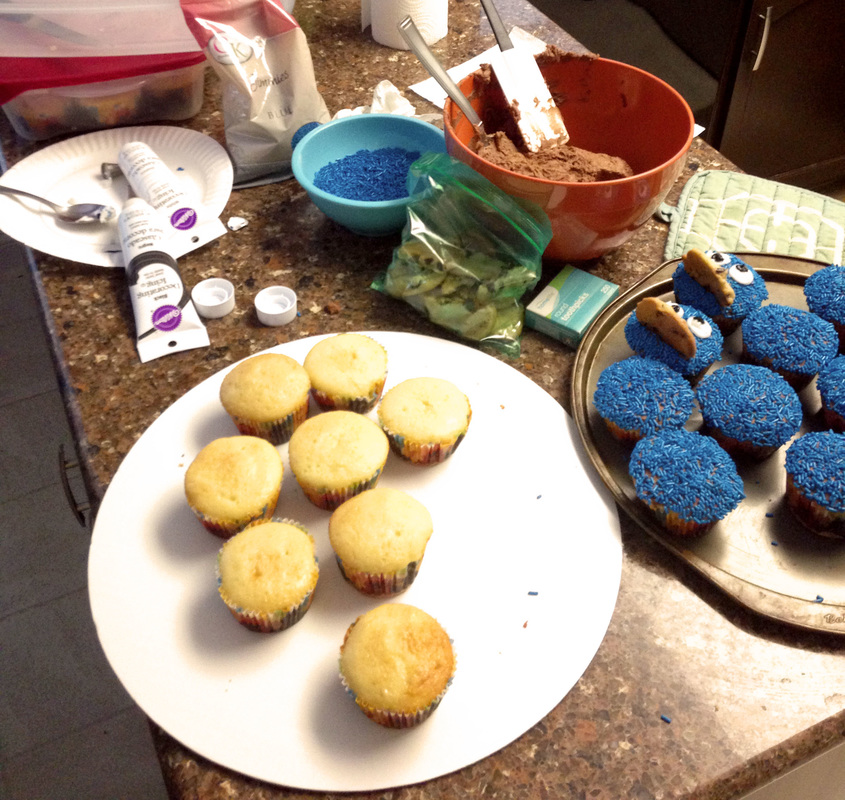 For Elmo’s mouth, you could always use half of an Oreo, but since I already had a black tube of icing for the pupils and I didn’t have Oreos – I went with the easier option.

If you are thinking of making the Elmo cake also, you can use leftover sprinkles and icing tubes from the cupcakes 🙂

I used a pizza pan to put the cupcakes on, so the Cookie Monster sprinkles didn’t run everywhere.

A cookie sheet would be fine too, but I was using all of those for my butterscotch batches that were baking.

Here is a picture of the finished Cookie Monster cupcakes.

The homemade cupcakes turned out so cute and were much easier to make with sprinkles, rather than the blue icing 🙂 ​The only decorating that was needed was the eyes. So these Cookie Monster cupcakes are pretty fool-proof!

How to Make Elmo Cupcakes

For the homemade Elmo cupcakes, I took almost the exact same steps as the Cookie Monster cupcakes listed above: I baked the cupcakes large so they would have a dome, iced the top, and then dunked them into a bowl of red sprinkles.

I then used the icing tubes to draw on the face. A little more skill was required for Elmo’s nose, eyes, and mouth (compared to just Cookie’s eyes), and I was tired from baking all day – but they still turned out pretty nice.

If your toddler can recognize Elmo, then you know it looks pretty good 🙂

The Elmo cake consisted of three main parts – the Elmo face cut-outs used on the sides of the cake, the icing, and the actual cake. All of them were pretty simple to make.

Listed below are all of the materials for the Elmo cake. I had 50+ people coming, so I wanted to have plenty of Sesame Street desserts to go around.

So my plan was to make red icing from beets to give the Elmo cake his red color.

I know that sounds crazy, but I didn’t feel like dumping a whole bunch of red dye into the icing that I knew my son would be eating by the spoonful.

I read that beets can be used for red icing, so why not try and make an alternative?!

Well, in short, tampering with the beets was a waste of time the day before having a huge party at your house. The beets turned the icing hot pink.

Too bad I wasn’t making an Abby Cadabby cake.

The teacher in me thought that I could still use the hot pink beet icing to ice the cake, and then put the red sprinkles over the side to make Elmo.

Well, that idea sunk when the cake started looking like Valentine’s Day with the hot pink and the bright red.

So, how did we get the Elmo cake red?!

Ash went out for more powdered sugar, and then we made another batch of icing in chocolate.

My altered plan was to ice the Elmo cake with chocolate frosting and then use the red sprinkles for the sides.

It worked out well, and we absolutely loved the way the Elmo cake looked!

The most time-consuming part, beets aside, was getting the sprinkles to stick to the sides of the cake.

My quick google search showed me there was no good strategy, other than tilting, and I was not tilting a two-layer 12″ cake.

So, I grabbed a handful of sprinkles and pressed them up to the icing to make it stick. It took a while, but it was worth it in the end. I absolutely love the way the Elmo cake turned out.

This was actually the easiest part of making the homemade Elmo cake.

First, I made a half-batch of cut-out cookies. You can make these a day early and leave the dough refrigerated overnight.

I used circle cookie cutters to get Elmo’s eyes right, overlapping the circles a little. Then, I made two different sizes – a smaller and a larger, so that I could pick the better of the two after they baked.

I made about a half dozen of each version – just to have extras.

For Elmo’s nose, I used a large oval cookie cutter to go with the larger eyes.

Since I didn’t have a smaller oval cookie cutter, I set the large one down in the dough as a guide and used a knife to cut a smaller oval. I made about two or three of each size nose.

As a visual guide, I had an Elmo party hat in front of me that I used on the party decorations. This was helpful to look at as I worked.

After the Elmo face cookies had baked and cooled, I picked from the two sizes I had made. I actually chose the smaller size, and then I got started on the decorating.

I used candy melts in white and black (see materials above).

For the whites of Elmo’s eyes, I melted the candy melts and half dipped/half iced it onto the cookie.

Then, I simply took two chocolate morsels from the black candy melt bag and stuck them on for Elmo’s pupils.

The size was perfect!

I just spread it over the nose cookie until it was smooth. It would have turned out better with the melted candy, as the icing was a little streaky. ​

But hey, it saved me a trip back out 🙂

If you haven’t used candy melts before, the trick with these (or melting any kind of chocolate in the microwave) is to microwave the morsels for 30 seconds at a time.

​When you are heating it up in 30-second increments and giving it a good stir in between, you don’t run the risk of burning the chocolate.

After dipping, I placed them on a cookie sheet lined with wax paper. This contains the drips and sprinkles. I also used some of the white candy melts to drizzle on them too, after the pink had set.

I was so pleased with how the Elmo and Cookie Monster cakes and Abby’s wands turned out. It was definitely my best cake ever.

Last year, I tried to draw on a bear that looked more like a blob….

This year, I used cookies, sprinkles, and chocolate melts to mask my poor decorating skills 🙂

The homemade Elmo and Cookie Monster cupcakes totally impressed my party guests and me. These simple tutorials show you exactly how you can make your own party desserts.

The homemade Elmo and Cookie Monster cupcakes were a big hit among the kids! And, the adults loved the cake.

When you enjoy baking and creating something totally awesome, the time spent was absolutely worth it.