This post will show you how to throw an amazing Sesame Street party. There are tons of great ideas for DIY Sesame Street decor and games.

Three things I love are planning, making, and decorating.

And of course, seeing my son smile.

This summer, I achieved all of those things through throwing a fantastic summer Sesame Street theme party.

Almost every guest made a kind comment on how wonderful everything was – from the decorations to the party games to the themed food and homemade desserts.

How did I do it without going too crazy?

I spent a lot of time scouring the Internet (Happy 25th Birthday today, Internet), compiling ideas, and crafting my own.

​I carefully documented my techniques to make it even easier for you!

Without further ado, here are some highlights from the cutest, do-it-yourself Sesame Street party. 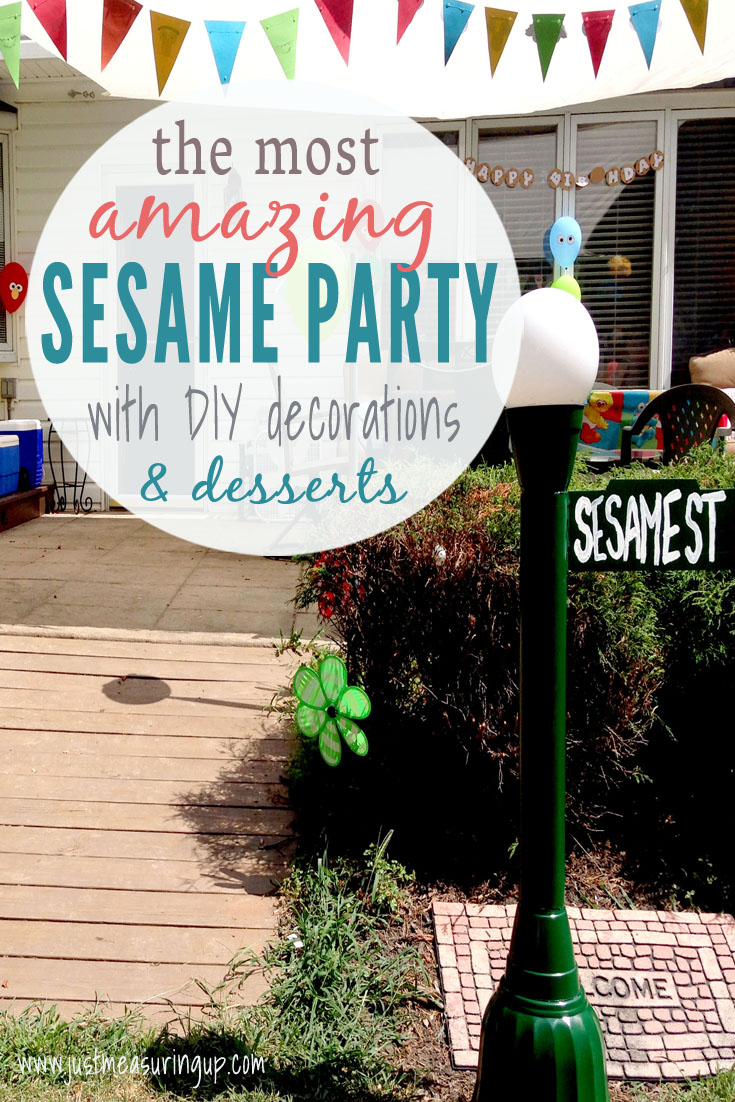 ​I love efficiency almost as much as I love a good theme party, so I had planned to make the decorating as easy as possible, without compromising my extravagant plans.

This is one of my best party tricks – using the same templates for everything I can! I also recently did this planning a puzzle party!

Decorating was super easy when you reuse the same things for each decoration.

The party hats I bought at Walmart (you could use these party hats too) and then simply glued the faces on.

This was so simple to do!

So simple that I did the same with the goody bags, buckets (I used to tape so I could reuse the buckets), and balloons.

For the triangular pennant banner, I cut the pennants out of brightly color cardstock (a combination of this pack and this pack), and then used fishing line and hot glue to connect.

The photo booth props were super simple – I just glued some signs and faces to popsicle sticks.

Once you have the props, you only need two more things for an easy do-it-yourself photo booth – a backdrop and the photo booth app.

My husband wrote the app Easy Photo Booth, and you can download it for free.

Last, the tissue paper pom-poms were a mix of dollar store finds with homemade ones – and then again, I simply glued the faces on.

Making your own pom-poms is super easy. Here’s a great tutorial on how to make tissue paper pom-poms.

Also, if you check your Dollar Tree, you might get lucky and find a 2-pack at the dollar store. This is a great set of tissue paper pom-poms too because they are Sesame colors. 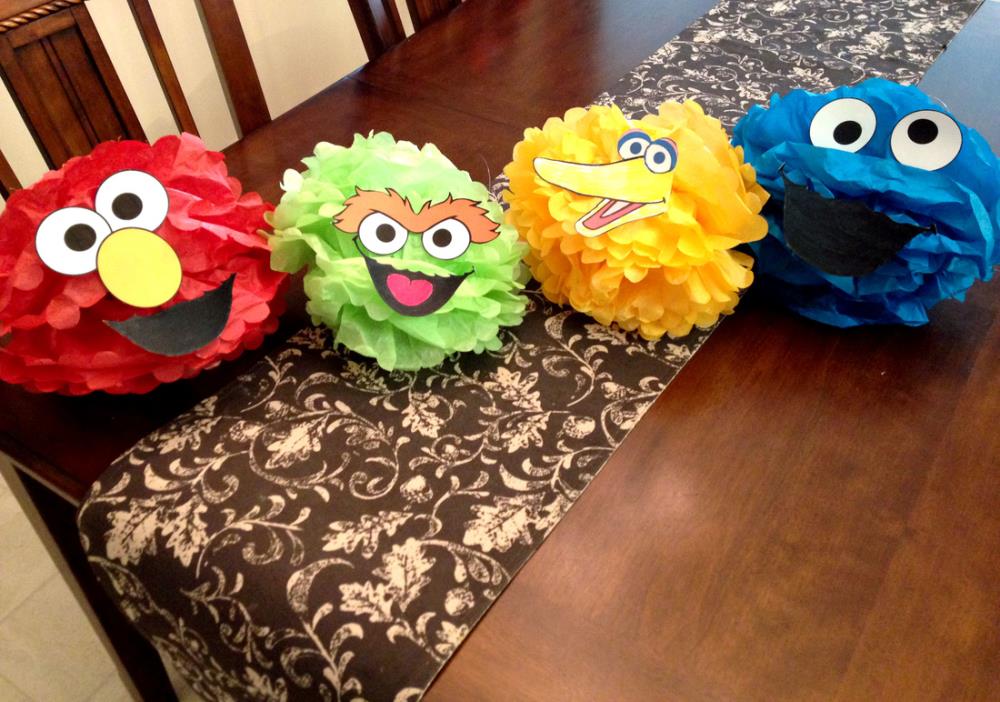 I made the party hats using the same character cut-outs from above.

Let’s move on to my favorite part of the Sesame Street party (and well, every party) – the desserts!

I made a 12″ two layer, gluten free vanilla cake with my sister’s delicious chocolate icing. I used red sprinkles on the sides, and the eyes/nose are actually sugar cookie cut-outs that are dipped in chocolate melts. For step-by-step, instructions, see my cake post.

​I loved this cake so much that I was actually a little sad cutting into it. 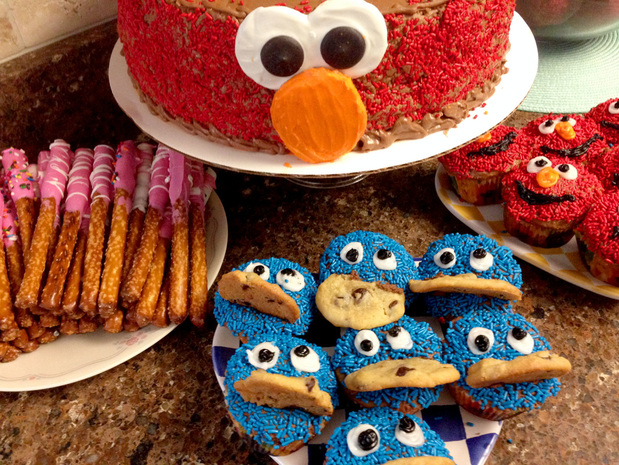 The cupcakes were the most fun to make! They are simply dipped in sprinkles and decorated. To show you just how simple it was, I wrote a step-by-step tutorial on exactly how to make these cute Sesame cupcakes. 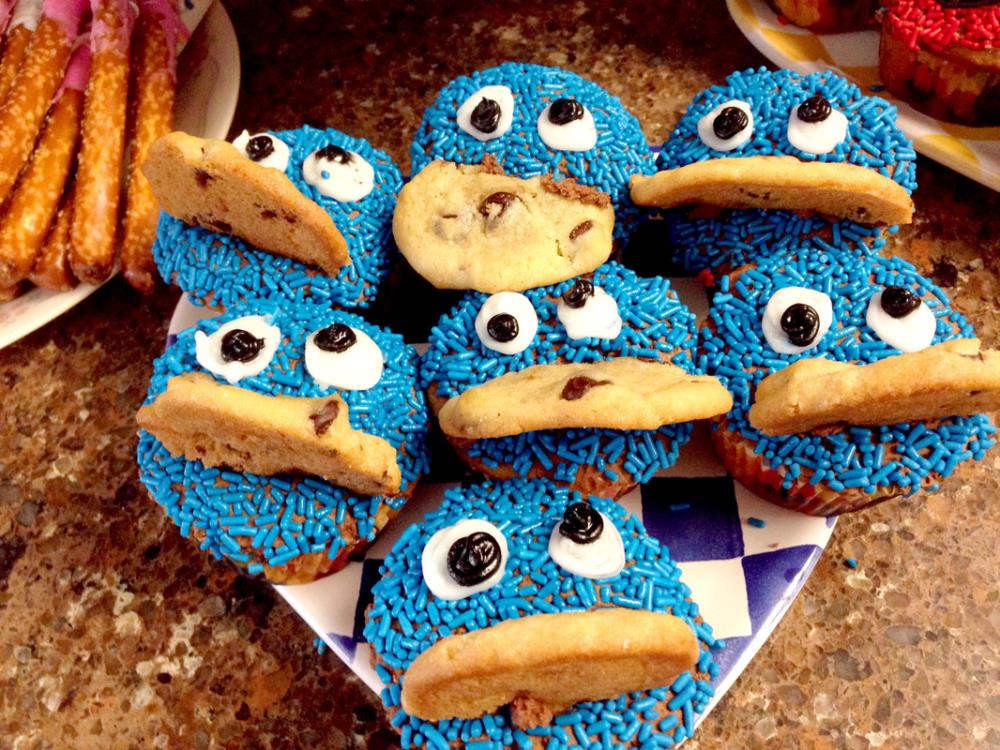 Making the snacks into character faces was so fun! Look how cute Oscar turned out!

​We also made a Big Bird out of cheese and crackers along with a watermelon Elmo. 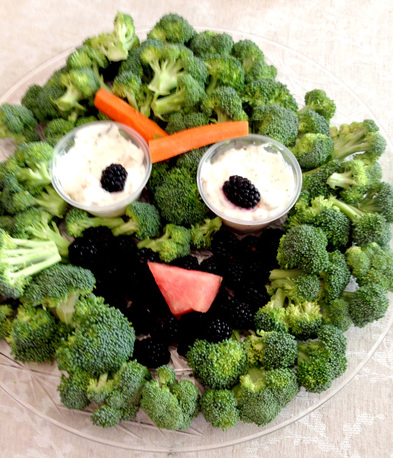 With the menu not finalized until a few days before the party, I almost nixed labeling the food to coordinate with the theme of the party.

​However, I’m so glad I didn’t because who doesn’t get a good laugh out of “Oscar’s Scram-burgers” and “Ernie’s Rubber Doggies?!”

If you want to check out more funny themed food, you’ll get a laugh out of our Beatles themed party! 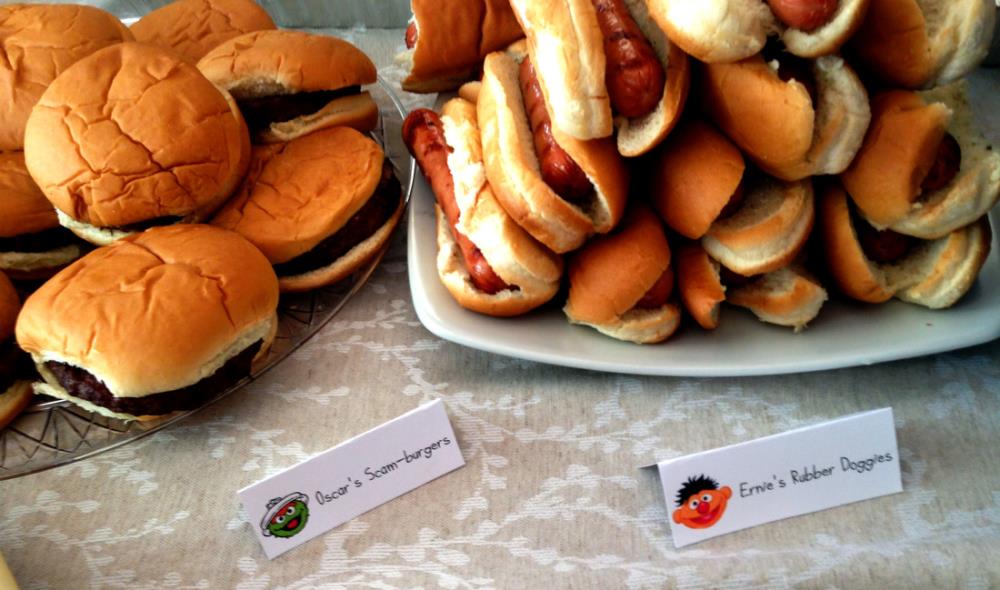 Here you can see more of the table, the amazing DIY birthday sign (so easy to make), the party hats, and the goody bags. 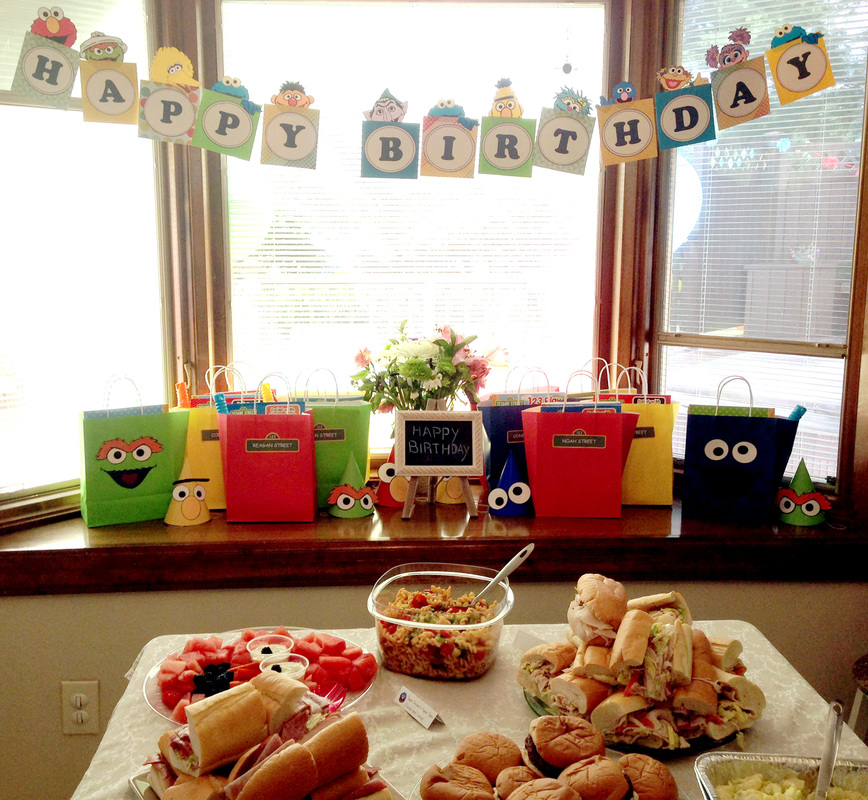 Below is a close-up of the DIY sign as it was still in the making. I actually couldn’t find any free, printable letters that worked well, so I created my own.

In doing so, I created free banner letters for you (just the letters – no characters).

The best thing about these is that you can customize the letters and just print what you need. Four letters fit per page too!

I love the way it turned out! ​Zeus did too – even though his face isn’t showing his excitement 😉 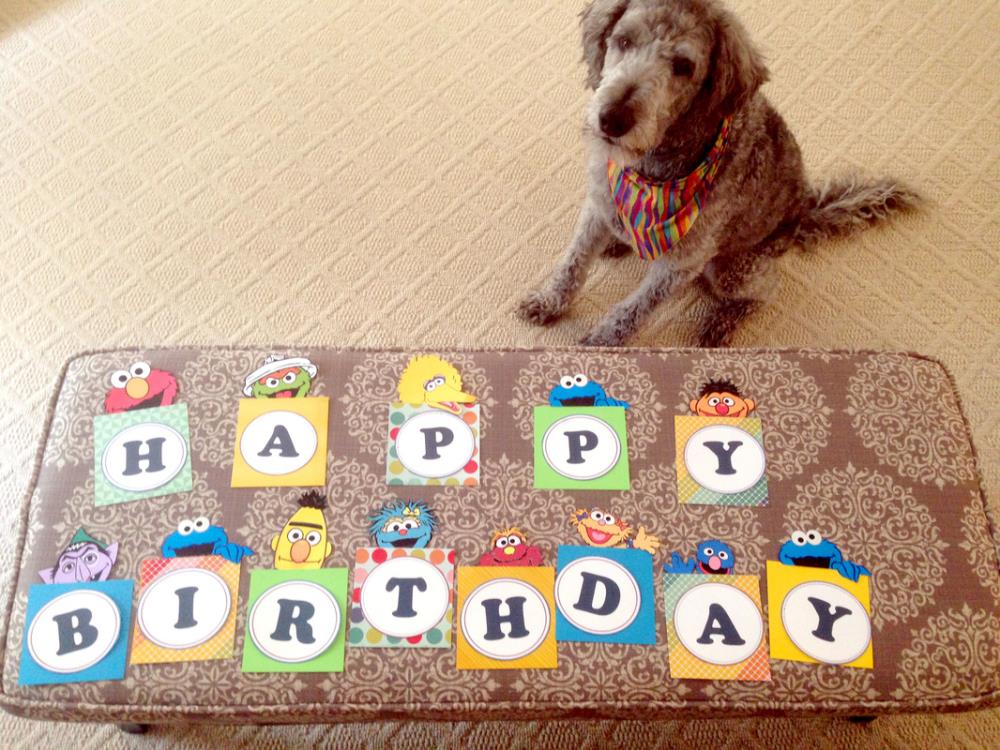 I googled pictures of the characters and cut them out to look like they were holding the sign (see pic further down).

Now, onto games! We had quite a few at the party.

​I painted Cookie’s face on a piece of foam board from the Dollar Store, and Ash gave it a nice wooden frame. 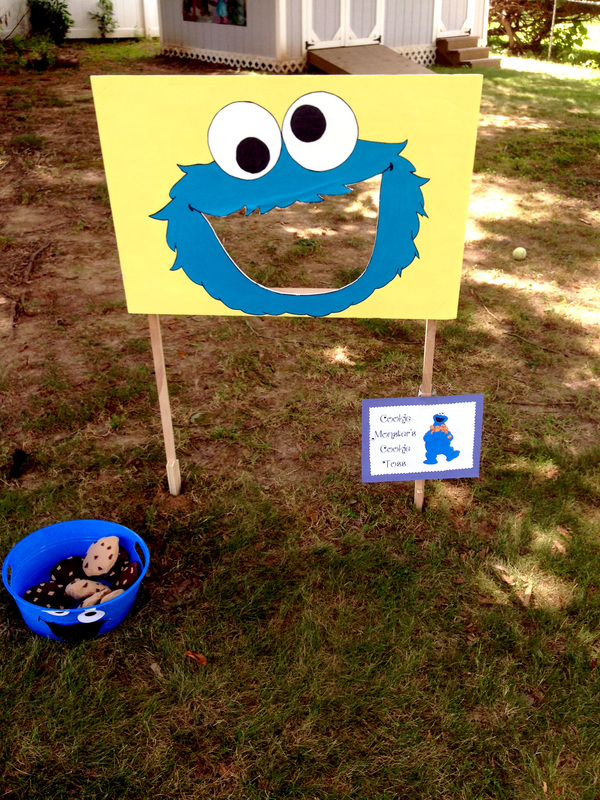 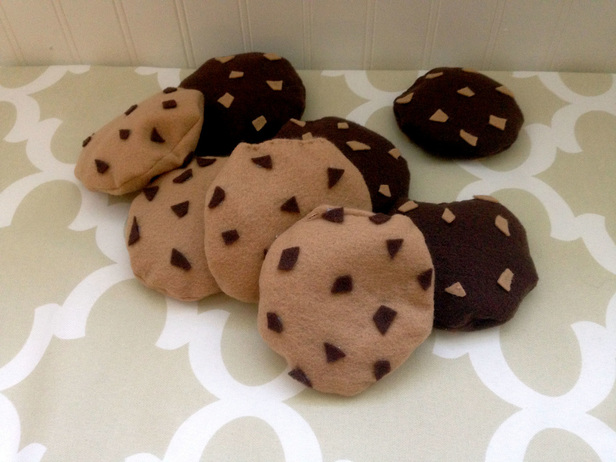 We also did “Pin the Nose On Elmo” made of felt on felt.

Felt sticks to felt, so this is a really simple activity to make.

I hot glued the felt to the foam board (all except the noses!) 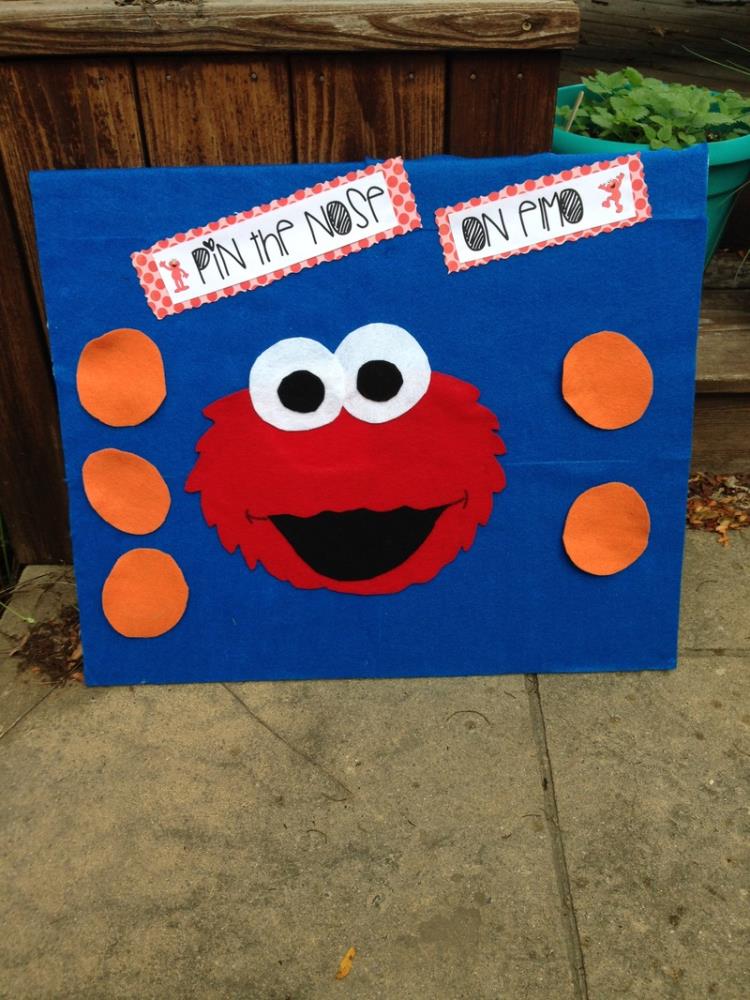 Count with the Count Activity Board

…as well as “Count with the Count” made with card stock, wrapping paper, and 3D stickers. I found the Sesame wrapping paper at the dollar store!

In the background, you can see this Sesame Street banner on our shed! 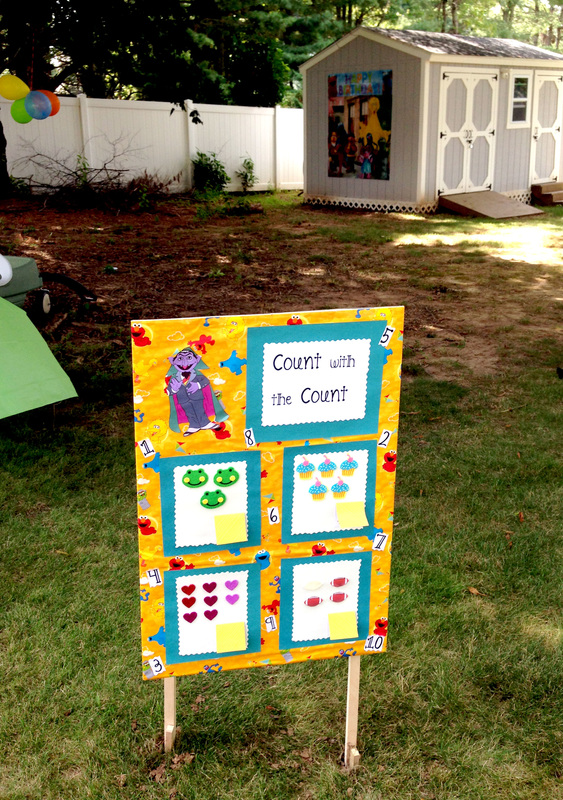 There’s also Abby’s Magical Shapes, which was my son’s favorite. He learned these shapes in just days playing around with this board prior to the party. 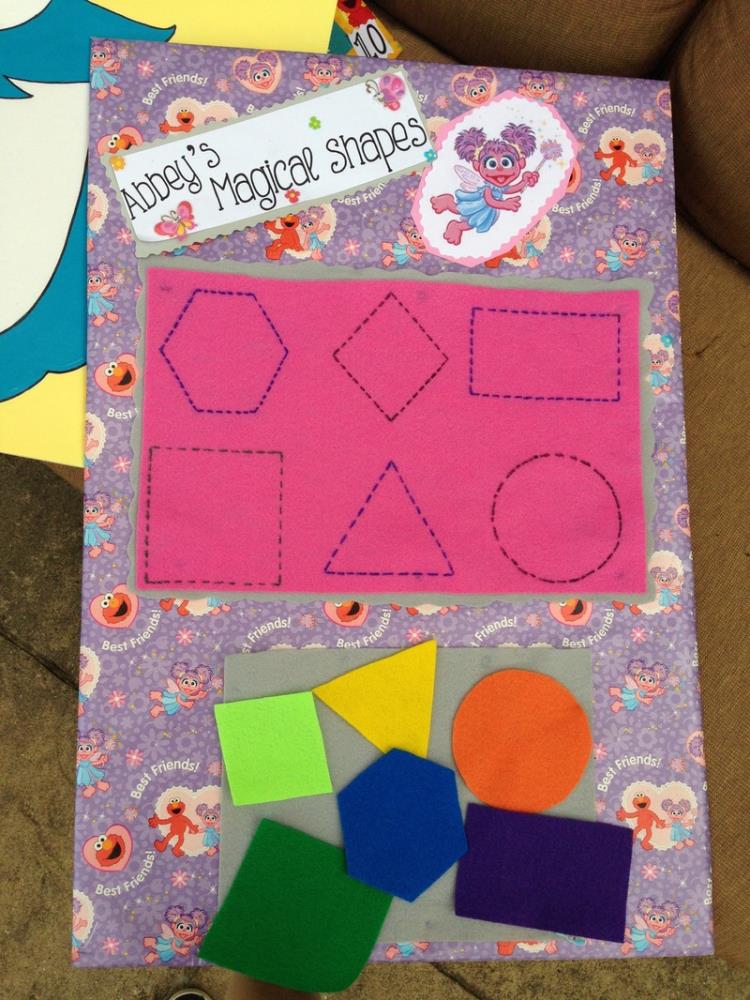 And, last but not least, we can’t forget “Hoppin’ with Zoe,” an indoor/outdoor hopscotch rug made entirely from felt!

Check out my tutorial to make your own – it’s so, so easy and completely no-sew. 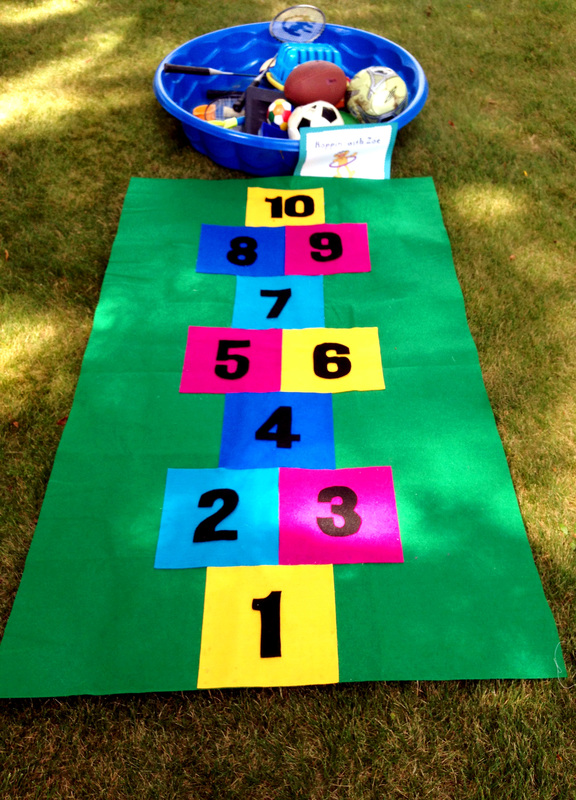 We also had a Sesame photo booth at the party.

On our deck, we set up this sheet of felt (you could also use a blanket as a backdrop), along with the computer app that Ash made! 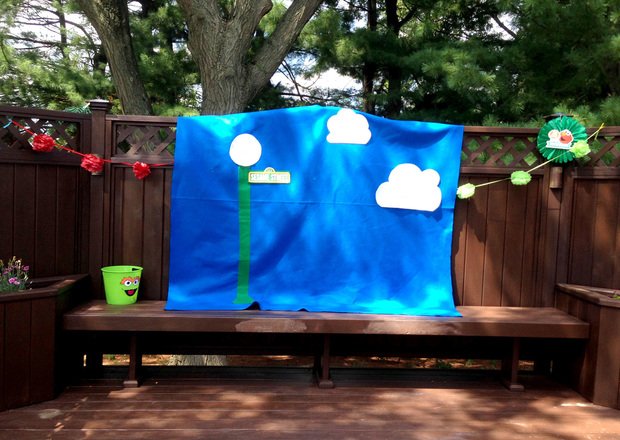 Here are the Sesame Street props I made. Some of them were character cut-outs, and others I threw together.

This was also a last minute activity 🙂 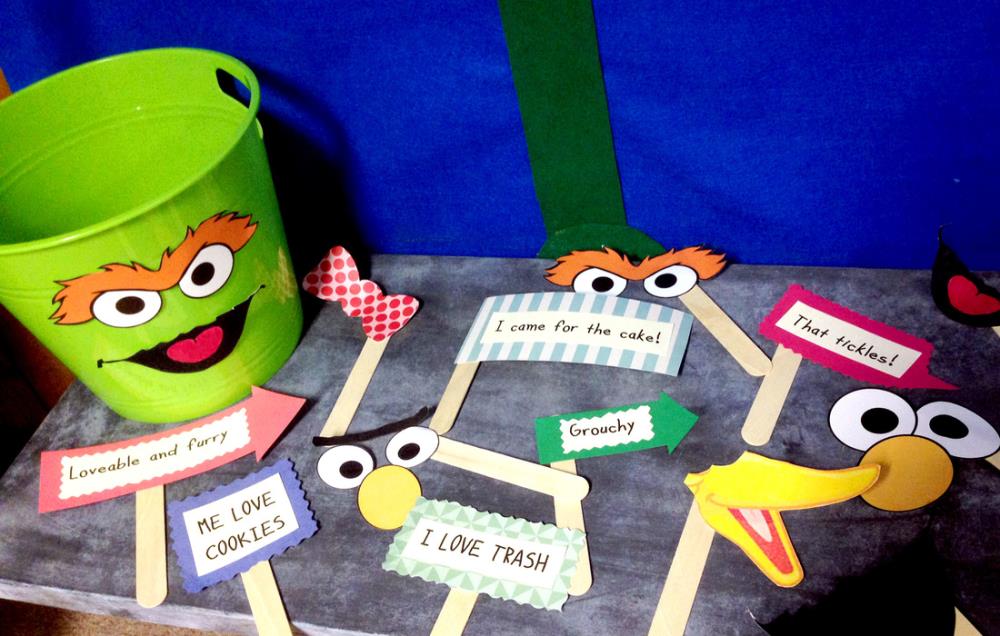 I made homemade shirts for everyone in our families.

Each one was a character, and it turned out so cute!

I used shirts from Shirts In Bulk – they have great prices and a large variety of colors, which made it easy to get all the character colors accurate. We made iron transfers, but I didn’t write a post on it because the iron transfers fell off after one wash!

Yet, they still looked cute for the big day!

Can I reuse any of these Sesame decorations?

Yes! You can reuse the pennant banners, the pom-poms, some of the photo booth props for a different party theme next year. Just take off the character faces and next year, replace with the new theme.

You can save the activity boards for rainy day activities.

You can also sell your party-themed things at an online yard sale. The person who buys it will have their whole party planned!

What Sesame Street party supplies and decorations can I get at the Dollar Store?

Depending on your dollar store, you can get the balloons, party hats, tissue paper pom-poms, foam boards (just a savings!), and paper products/tableclothes at the dollar store.

I always have the best luck at the Dollar Tree! And if you have a few in the area, go to a few!

They have different things at different locations.

I don’t have time to DIY all these things. What can I buy already made?

DIYing the decorations didn’t take too long! If you can get someone to help with all the cutting, that would be really helpful.

However, if you are looking for some quick Sesame Street decorations, there are pre-made Sesame character pom-poms, pre-printed Sesame face balloons, and swirly Sesame decorations. Here is a fun photo booth background with the Sesame Street characters.

Sometimes if I’m in a pinch, I buy some things and DIY other things. 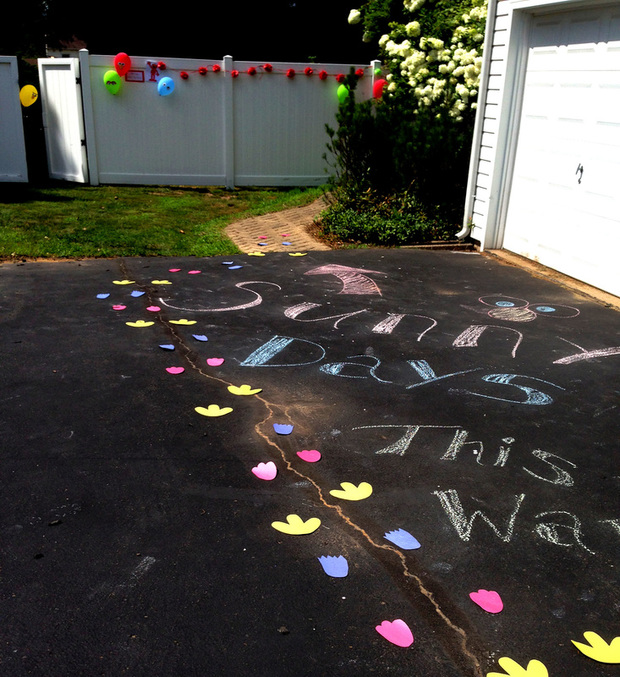 It definitely was a party to remember!

Overall, I put a lot of time into planning and creating. However, I detailed the steps for you to make it easy.

Your Sesame Street party should be a breeze! 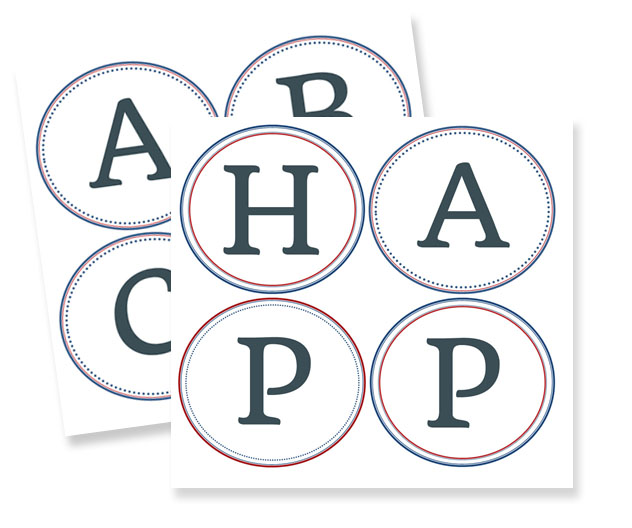