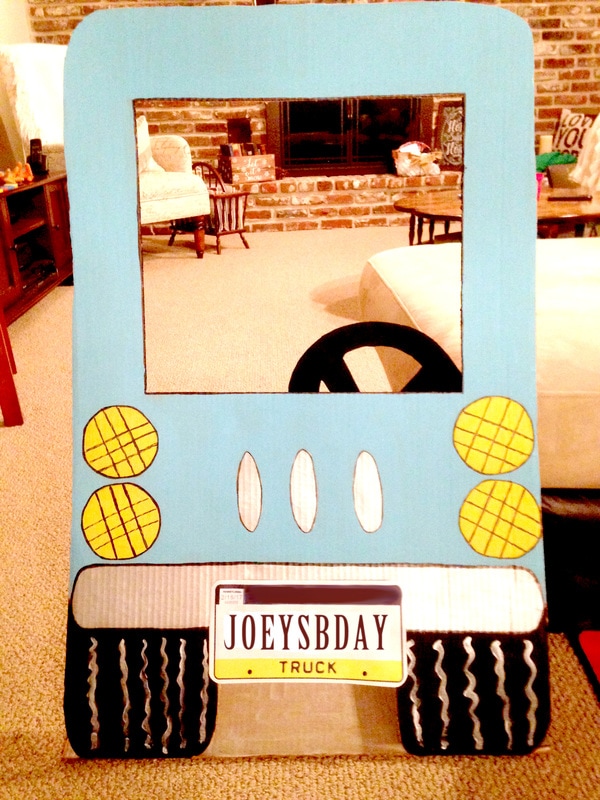 Wondering what kind of party to throw your little guy? Plan a truck birthday party!

It’s a simple theme to work with, and there are lots of easy DIY ideas that won’t break the bank or stress you out.

I recently put together a few crafty things, including a photo booth, a truck game, and themed goody bags, for my dear friend’s son’s truck party.

They were easy to make and added such a magical touch. 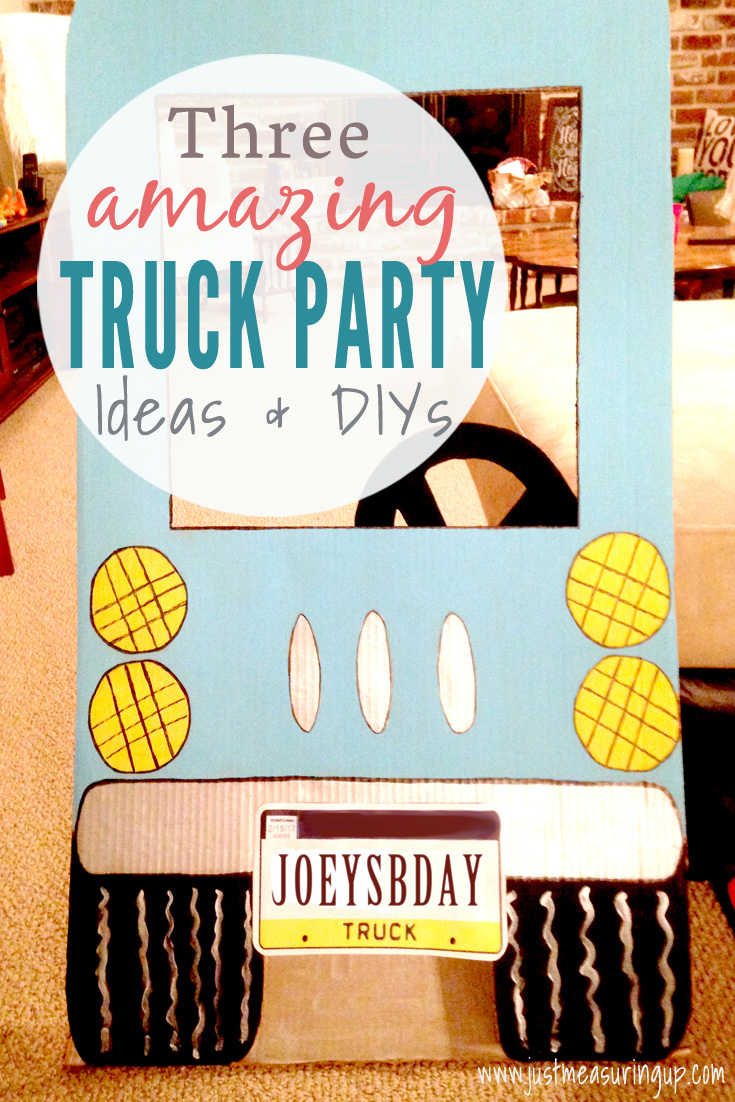 Pin the Wheels on the Truck

First, I love felt. I have piles and piles of it, and I love making felt boards for my son. He learned his shapes from his birthday party felt board (Abbey’s Magical Shapes).  And, I love how felt sticks to felt. It makes designing activities so simple 🙂

Not only are felt boards a fun learning tool, but felt boards double as great party games, especially for toddlers.

Rather than hosting a formal game, these felt boards make great stations for kids who are developmentally at the parallel play stage.

HOW TO MAKE THE FELT BOARD

To go with the theme, I made a Pin the Wheels on the Truck felt board. The materials cost nothing – because I utilized things I had previously purchased for other parties or activities.

​I used a foam board from Dollar Tree (definitely check out Dollar Tree first because these boards are way higher priced at the craft stores). Then I hot glued sheets of blue felt to the board make the background.

The felt pieces were about the size of a sheet of paper, so it took quite a few of them. Conversely, you could buy one big sheet of felt from the crafts stores – but I love using what I have 🙂

For the truck, I picked bright colors to contrast the blue background. Then, I found a clipart truck that looked like it had simple angles and cuts and then I draw it freehand on felt.

​Alternatively, you could enlarge the clipart picture, print it as an 8.5×11 image, and then trace it.

If it’s too small, you could always cut it out, lay it down on the felt, and then following the lines, draw it a little big bigger than the image, using the image as your guide.

For the wheels, I traced circles using a coffee mug as a guide. And then I just made small, triangular cuts around the perimeter to make the wheels look spikey. They are by no means perfect, but they got the point across 🙂

As far as other cut-outs, I cut out a window, headlight, and thick yellow lines to give the dump truck some depth.

I hot glued everything down – except the wheels!

Last, my favorite part of any project is the creative spin. ​I printed a picture of the birthday boy and glued it in the window as the driver.

​I also put a little label on the truck that said his name, written like it was a company truck.

My friend just LOVED the felt board. She was blown away with her son as the driver and loved how cute it turned out 🙂 The kids had a great time playing with it at the truck party.

This prop was my favorite. It was previously a cardboard box that now serves as a truck photo booth 🙂

My friend had a huge box from getting her bathroom redone. So, I simply cut off one side of the large box. I didn’t cut off the top flap – because this served as the stand.

First I drew the truck using pretty basic shapes – rectangles with curved corners for the tires and bumper, square window, and circles for the headlights.

Then, I drew everything out with a pencil before I started painting. I also used a yard stick because I am the worst at straight lines.

For the paints, I used the below acrylic paints. I loved the colors together.

Painting Tip: Don’t make the mistake of using kids paint. Kids paint is very watered down, and you will end up doing multiple coats. I’ve done this before – and it was not efficient or fun.

I did two quick coats of paint – so you couldn’t see the cardboard anymore. Two coats also made the colors pop.

Then, I carefully cut out the window, the space between the tires, and made nicer edges around the whole truck.

It wasn’t looking much like a truck until I used a sharpie to give a nice clean outline around everything. I also painted some squiggly silver lines, which brought the tires to life.

Next, I made a steering wheel out of… you guessed it – felt! I thought it would be nice and soft for the kids to touch rather than painted cardboard. Plus, it’s way easier to cut felt than cardboard. To attach it, I used hot glue.

Last, Ash made the adorable license plate – by simply grabbing a license plate image and using Photoshop (you can use paint too) to write on it.

Not only was the cut-out a hit at the truck party, but my son LOVED watching/helping me make it. I let him do just a little painting…

He must have played with the completed truck for two hours while I cleaned the house one morning.

​Even if you aren’t throwing a party, cardboard creations can provide hours of fun for toddlers 🙂

Goody bags are always an easy way to further incorporate the theme of your party – and these goody bags couldn’t have been easier to make!

I simply purchased yellow goody bags at AC Moore for 70 cents. (There are also some cheap craft bag options on Amazon).

Then, I made a little truck cut-out, which I included below in a free download. (You can also use cookie cutters.)

Then, my friend and I traced the truck cut-out onto blue cardstock. For the wheels, we traced the circles using a small container of paint and black paper.

​After some glue, they were ready to go! They took less than 30 minutes to make – and added such a cute touch.

If you’re still wondering what kind of party to throw your little guy, don’t overlook a truck party. These simple DIYs were easy to make, cost little to nothing, and blew the guests away!

Not only do these ideas work for a truck birthday party, but they also work for a little blue truck party (popular for 1st birthdays), Bob the Builder parties, and construction parties. ​

And, in addition to the party, the felt board and photo booth prop can occupy kids for hours before or after the truck party.