When we moved into our new home, we had an amazing backyard, but it was missing one thing – a clear path from the patio into the backyard.

The patio was somewhat secluded with a row of bushes around its perimeter. To get out to the grass, you had to use a little rock path.

Right away, Eileen mentioned how this “walkway” wouldn’t work for our family. The rocks were uneven and the ground had a sharp decline.

On top of that, the pathway was so narrow, as the bushes had grown bigger than probably anticipated. She was worried about our little one tackling those rocks or our dog scampering through the bushes each time he went out.

Eileen had some solid points, so a new walkway got added to the list. 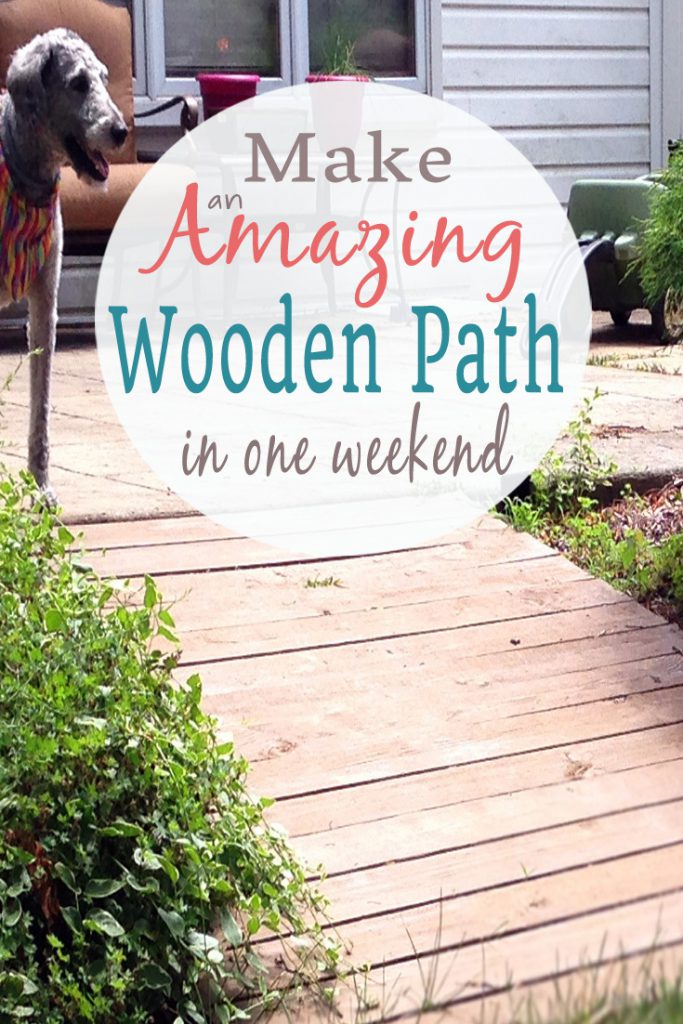 Pictured below is the best before picture we have. Unfortunately, it doesn’t give much of a picture of the little rock pathway, nor does it give a good feel of how large the bushes had grown and just how narrow the walkway was. Better than no picture?

The solution we decided on was to relocate one of the bushes to another part of the yard, and to install a boardwalk type pathway into the yard from the patio.

Transplanting the bush was easy.

I just dug around the root system until I was able to lift the plant out of the ground. I dug a comparable hole nearby and plopped the plant in, packing down the dirt and giving it a good watering.

We filled the old hole with dirt, and raked the ground really well to prep it for the new walkway.

I predesigned the walkway on TinkerCad to get a feel for how it would come together and also how much wood we would need to purchase.

The patio was at a higher elevation than the yard, so there was going to be a slope to the walkway.
​
Here’s a picture of the 3D plan for the walkway (grey part being the patio, and the green being the grass): 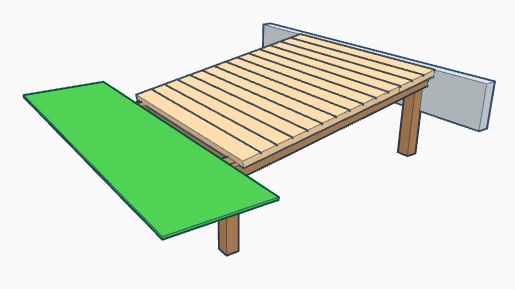 With most outdoor projects, the walkway was to be built with all pressure-treated wood.

This was especially important for the walkway as it was going to be in direct contact with the ground allowing easy access to bugs.

For the structure, I planned to bury four 4 x 4 posts at each corner of the walkway.

The upper and lower posts were to be connected with a 2 x 4 support beam which the boardwalk planks would screw right into.

Here’s a picture of underneath the walkway, showing the support beams: 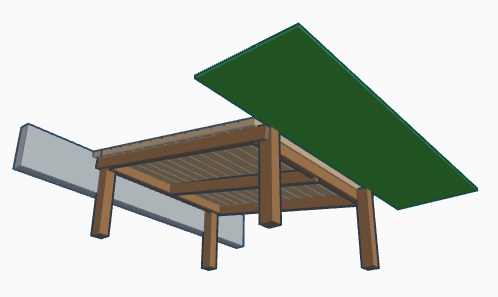 How to Make a Wood Walkway

Construction went smoothly for the walkway. I first cut the corner posts to length. Then using a post hole digger, I dug 2 ft deep holes for each post.

At the bottom of each hole, I packed down a layer of gravel to provide a sturdy foundation for the posts. Then I just dropped in the posts and filled in the surrounding space with dirt.

I also used an 8lb tamper to pack down the dirt really well around the posts.

I then cut the support beams from 2 x 4s and screwed them into the buried posts.

Afterwards, I cut the boardwalk planks from 2 x 6s and screwed them into the support beams.

Finally, to weather-proof the project, we put down two coats of deck stain.

The wooden walkway construction was now complete.
​
Pictured below is the completed boardwalk, with the family member that uses it most 😉 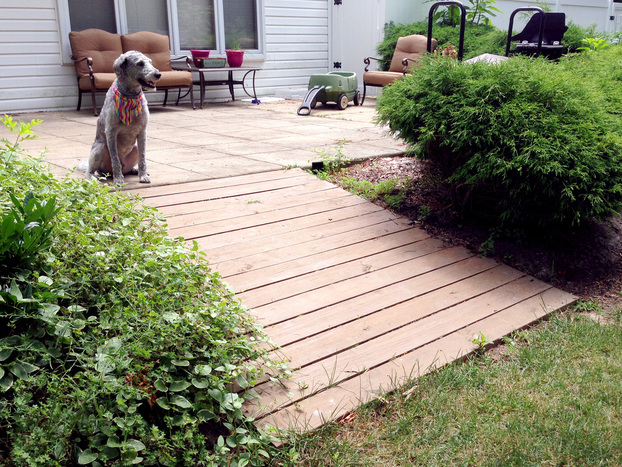 Here’s another shot, which shows a little more of how the wooden pathway connects the patio to the backyard. It also shows the slope.

A year later, we are still so pleased with how the wooden walkway turned out.

It was the perfect solution to the narrow path problem we once had. It’s perfectly sized, regarding its width and its steepness. Toddlers can handle the slope very well.

It’s very sturdy and it doesn’t get slippery in the rain or the snow.  Slipping has not been a concern; however it is down the road, I can always adhere some grip tape to the wood.

Best of all, the boardwalk did not cost much or take very long to make. We spent under $50 and completed the project in one day.

If you are looking to build a wood walkway for your yard, it’s budget-friendly, sturdy, and holds up great. You won’t be disappointed!